Hannaford Supermarkets on Saturday unveiled a new prototype in Bedford, N.H., designed to meet the needs of an evolving consumer and stretch the possibilities inherent in its brand.

The 68,000-square-foot store debuts a suite of new features built around innovation and convenience, reflecting two years of planning and shopper research, as well as pilot tests of various departments in existing stores carried out over recent months, Mike Vail, president of Hannaford, told SN in an exclusive interview.

“The Bedford store represents our first effort at putting it all together in one facility,” Vail said.

The store is the first new prototype in 16 years for Hannaford, the Scarborough, Maine-based division of Delhaize.

“We try to look at our format every 10 years and we were a little behind,” he confessed. “We have a very successful format that we launched in 2000 but as Whole Foods continued to penetrate, as Trader Joe’s came onto the scene, as Price Chopper evolved their model and as Wegmans made their presence felt … it just became clear that we needed to start over and start a new format, rather than add on. It was time to start over and say, ‘What do consumers want today?’”

Hannaford answered those questions through a comprehensive effort launched in 2014 known around the company as Project 2020. It involved what Vail called deep customer research and a subsequent investigation of stores in places like Toronto and the Pacific Northwest. Hannaford’s team — representing a cross-section of company employees — sought out stores demonstrating both practical solutions and leading-edge innovations.

“This was different than just walking stores. We really went out with a purpose,” he explained. “We completed our consumer research ahead of [those store tours] and really understood what the gaps were between what we were delivering and what consumers were looking for, and we looked at parts of the country where we thought there would be solutions.

“We were very careful about the team we put together to do that benchmarking,” he added. “It wasn’t just the typical cast of characters, where you send the merchants out and have them come back with the ideas. Certainly, we had some merchants there, but we also had some store managers, some customers, people in different parts of the organization that would have different points of view on how to help us.” 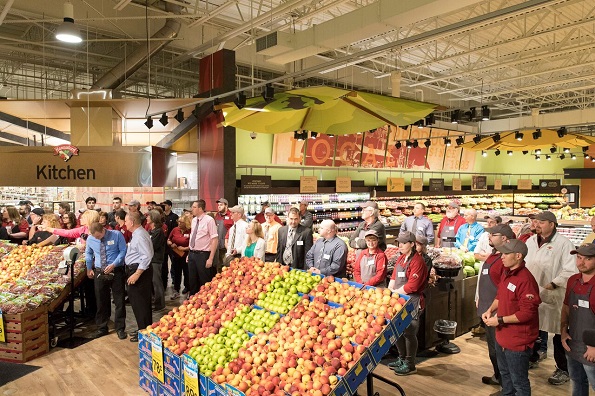 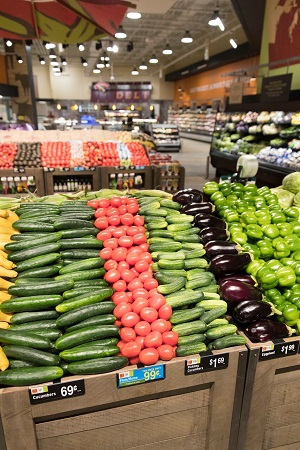 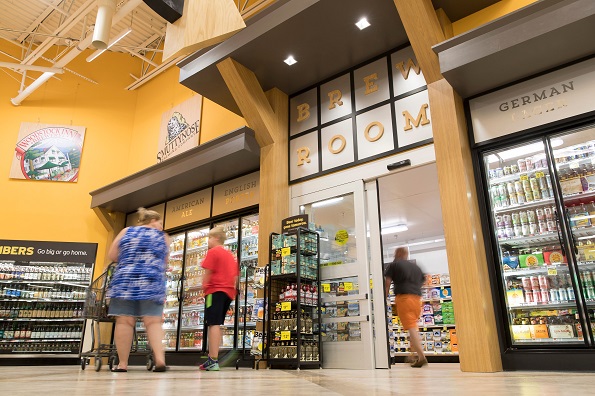 The prototype features an all new prepared foods offering known as the Hannaford Kitchen, where shoppers can order foods made in front of them for immediate consumption in a sit-down café designed to encourage the social atmosphere of eateries like Starbucks or Panera Bread, Vail said. A stir-fry station where shoppers can choose their own vegetables and proteins is among the highlights. The Kitchen will also prepare items like burritos, custom sandwiches and salads, and has bumped up the quality of recipes for returning items like fried chicken.

“A big thing we’re doing is meeting a need for immediate consumption. [Supermarkets] began with raw foods — ingredients to prepare at home. Twenty years ago the industry began moving to partially prepared or assembled foods that people could take home and heat. We still have some of that heat-and-eat, but now we’re really finding immediate consumption is an expectation of supermarkets so we’re meeting that.”

The store is also addressing convenience in a revamped pharmacy offering with various medical services, and integrates the Hannaford to Go click-and-collect e-commerce option now successfully rolled out in a number of stores, Vail said.

The planning process extended to an examination of how shoppers traversed the store, known as Pathtracker, resulting in a revamped store layout that places the produce and meat departments alongside one another, among other changes inside.

“We’re leading off with produce, which is not unusual, but we’ve brought the meat department right up behind it. It’s immediately adjacent, like a first aisle, instead of running along the back of the store,” Vail explained. “People have told us: They want to get their produce, they want to get their center of the plate proteins, then they want go from there. That’s something we’ve learned from pretty deep consumer research that informed this prototype.”

The layout also opens up the produce floor. Gone from previous Hannaford models are the distinctive trees inside the produce section. "They created an ambience but made the stores a little difficult to shop," Vail noted.

In center store the chain has integrated natural and organic sets, also a change from previous Hannaford models. There’s a “beer cave” with a large selection of craft beers and a vastly expanded wine department with more than 900 SKUs.

“We’ve always done well with wine, but we really want to be in the wine business,” Vail said. “The wine department really anchors the last aisle of the store – which is usually a boring aisle to shop, but not in this store.”

A new décor package communicates a message of “sophistication and quality” but Hannaford has also made room to emphasize value, Vail said.

“We have several places though the store we can showcase truckload sale items and full pallets of product that add great values throughout the store. So it’s not only this over-the-top quality experience but we’re also letting consumers know we’re looking out for them with our prices,” he said.

That’s an important aspect of Hannaford’s positioning in Bedford — a wealthy bedroom community of Manchester that has attracted a number of new competitors, including a Whole Foods that opened less than a mile away earlier this year, and an even more recently hatched Walmart Supercenter. They joined three Market Basket stores that opened regionally over the previous three years.

Hannaford is a mainstay of the Manchester area, while this site — a former Stop & Shop left behind when that chain pulled out of the market in 2013 — replaces a smaller Hannaford store nearby.

Although the store is intended to make a statement, Vail insisted it will do so primarily by turning up the intensity — and the creativity — on attributes for which Hannaford is already known.

“I think we absolutely have the brand equity to do this. We have a very powerful brand with the No. 1 and 2 attributes being our meat quality and our produce quality. We measure that very carefully,” he said. “We expect we will continue to win in those areas, but in order to do so, the price of poker goes up all the time.”

Vail declined to comment on the cost of the store, but said Hannaford would look to “value engineer” aspects of it as parts to roll out to new and renovated locations.

“It’s safe to say that unless we’re surprised in a negative way the décor package we used here will show up in remodels,” Vail said. “Our typical prototype are 47,000 square feet and 56,000 square feet, so we wouldn’t be able to replicate this store everywhere. We will have to decide what we can replicate in our formats.”

Vail described tackling the challenge of Project 2020 as “exhilarating, but hard work.”

“You’re trying to run the business and develop something new at the same time. It takes a lot of effort, resources and cooperation to land on what the consumer is looking for and how to deliver on that,” Vail said. “But that’s the excitement of this business. We’re in this to meet consumer needs and frankly, win in the marketplace, so everyone in the organization is excited about this opening. We’re a growing company, a confident company and we’re winning. So that inspires me, and it inspires the team.”