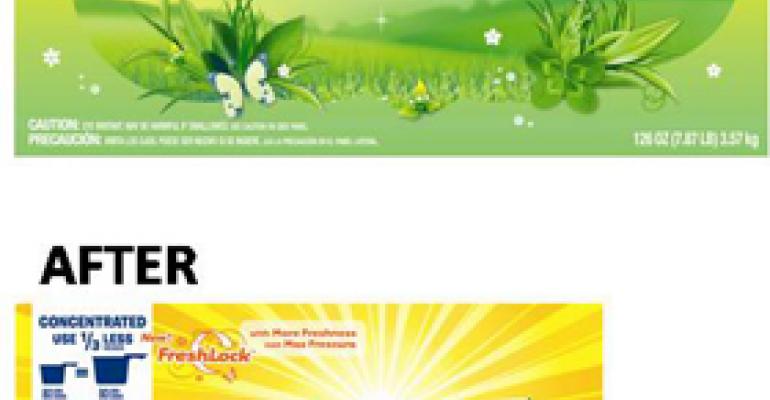 CINCINNATI &#8212; Procter & Gamble will introduce compacted versions of its Tide and Gain powder laundry detergents, resulting in cartons that are 33% smaller than those currently on store shelves.

CINCINNATI — Procter & Gamble will introduce compacted versions of its Tide and Gain powder laundry detergents, resulting in cartons that are 33% smaller than those currently on store shelves.

The new products, which will start rolling out Feb. 14, 2011, will clean the same amount of loads as current packages, thus requiring less detergent. They will replace current packages.

“If a consumer is used to buying a 40-load carton, it will still be available, only 33% smaller,” said Eric Forsyth of P&G’s customer business development team.

The smaller carton will result in a 28% reduction in corrugate, and 6% fewer trucks and 5% to 8% less fuel required to haul the products to stores.

The new items could generate $43 million to $68 million in incremental sales due to increased consumer attention and greater brand loyalty, according to P&G estimates.

P&G will not charge retailers more for the new products.

The conversion will take place in one wave across the U.S. and Canada, and will involve UPC changes. P&G started offering concentrated versions of its liquid detergents in 2007.

Formula upgrades for Tide and Gain will coincide with the new packaging. Tide will have increased stain-fighting capacity, while Gain’s formula will have perfume microcapsules for added freshness.

The powder initiative is the next stage of P&G’s Future Friendly sustainability initiative. The green consumer education platform launched in March as a way to make it easy for consumer to find and use products that help save energy and water, and reduce waste. P&G identifies such products with Future Friendly stickers on product packaging.