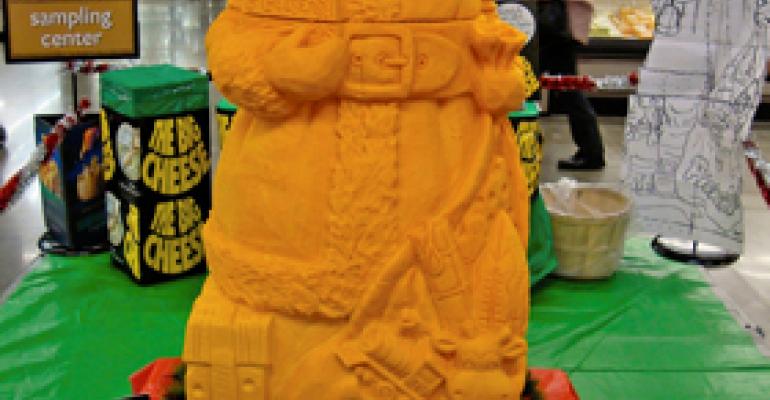 MILWAUKEE &#8212; Santa Claus emerged from huge blocks of cheddar at Roundy&#8217;s newest Pick N&#8217; Save store here last weekend. Sarah Kaufmann, known in the industry as The Cheese Lady, was commissioned by Roundy&#8217;s to sculpt Santa from three 640-pound blocks of Wisconsin mild cheddar in the store&#8217;s dairy department.

Sarah Kaufmann, known in the industry as The Cheese Lady, was commissioned by Roundy’s to sculpt Santa from three 640-pound blocks of Wisconsin mild cheddar in the store’s dairy department.

During the days-long project, customers were offered samples of Roundy’s private-label cheddar, the same variety used in the sculpture. Kaufmann arrived at the store on Thursday, and was still at work at 2 in the morning.

“It wasn’t nearly finished Friday, but crowds started gathering, and the press was there already,” Kaufmann told SN.

Local TV stations and two newspapers showed up, and then the story was picked up by CNN and network affiliates.

The sculpture’s completion on Sunday was celebrated with a ceremony attended by Roundy’s and Pick N’ Save officials.

“It certainly felt like the magic of Christmas. Carols were playing, all the decorations were up, and kids being so excited about Santa,” Kaufmann said.