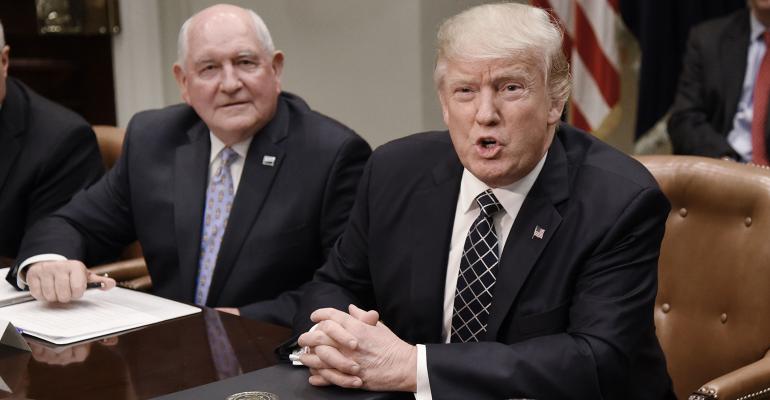 Perdue promises to support trade as he takes office at USDA

Sonny Perdue, sworn in Tuesday as the new U.S. Secretary of Agriculture, pledged to fight for farmers, consumers, food safety and the environment but takes office amid concern over trade and budget constraints that may be imposed on the agency and the interests it represents.

Food retailing groups including Food Marketing Institute, the National Grocers Association and producers like the United Fresh Produce Association have been supportive of Perdue’s appointment and said they were anxious to work with the former governor of Georgia who grew up on a rural dairy farm and whose appointment was confirmed Monday by the U.S. Senate in an 87-11 vote. Purdue succeeds Michael Young, the acting deputy secretary since January.

The secretary of agriculture oversees the USDA and its farm programs and can influence a myriad of issues important to food retailers including SNAP and WIC food assistance programs, food safety, country of origin and GMO labeling bills, and other policy.

“As secretary, I will champion the concerns of farmers, ranchers, foresters and producers, and will work tirelessly to solve the issues facing our farm families,” Perdue said in an address to USDA employees Tuesday morning. “I am proud to have been given this opportunity and look forward to rolling up my sleeves and getting to work as we continue to move the USDA and our nation forward.”

Purdue during his address in fact removed his jacket and tie and rolled up the sleeves of his dress shirt. “Y’all gotta know I was a farmer first,” he said to applause. “We’re gonna get comfortable, in our working clothes.”

Perdue didn’t mention proposed budget challenges directly, but said in support of farmers he’d fight for worldwide trade, noting the importance of exporting domestic farm products. An oversupply of domestic commodities like beef is said to be a major contributor to a current stretch of food deflation playing havoc with food retailers.

“One of the challenges I heard as I visited with over 75 senators was that we need to have a good trade policy because the producers out there have been so productive, we’ve got a lot of stuff we need to sell, and we’re going to sell it worldwide,” Purdue said. “Trade’s got to be at the top of our agenda. We’ve got to be good traders.”

That was good news to the ears of food producers concerned that President Trump’s rhetoric on trade could negatively impact exports, said Burt Rutherford, an editor at SN’s sister publications covering the livestock industry.

“All of president Trump’s rhetoric on trade has had agriculture a little concerned,” Rutherford said, saying major ag groups have largely been supportive of trade deals like NAFTA and the Trans-Pacific Partnership that have come under harsh fire from Trump. “But there’s also a feeling that the rhetoric by the president may also be just how he negotiates deals.”

In his initial proposed budget last month, Trump suggested a 21% cut to the USDA's discretionary spending programs, which could affect food safety, research grants and international food aid. The cuts would not affect mandatory programs such as SNAP, although the 2017 budget called for $6.2 billion for SNAP, a $200 million decrease from 2016. Some retailers have said reductions in SNAP benefits resulting from a rollback of temporary program expansions enacted during the recession have negatively affected their sales over the last year.

Perdue said his policies would be guided by four principles. He said he would maximize the ability of agribusiness to create jobs, produce and sell foods, and to “reap the earned reward of their labor.”

He also said he would prioritize customer service for consumers; continue to ensure food safety standards are met; and act to protect the environment.

When your new @USDA secretary from Georgia, of course you welcome him with peach cobbler. pic.twitter.com/j2T1sAdi4t

“Independent supermarket operators have seen an increase of new federal regulatory burdens in recent years that have hampered their ability to grow their businesses and create new jobs,” Greg Ferrara, NGA’s SVP of government relations, told SN in an email Tuesday. “Mr. Perdue was an advocate for grocers during his tenure as governor of Georgia and we look forward to working with him in this capacity to decrease the regulatory burdens placed on independent supermarket owners and operators, allowing our member companies the ability to continue to run their businesses with limited government interference and serve their communities.”

"We look forward to working with Secretary Perdue and the team at USDA on behalf of the food retail industry,” she said. “He made great strides in food and nutrition, particularly in the WIC program, during his governorship in Georgia, and I know he’ll work tirelessly for national improvements while at USDA.”