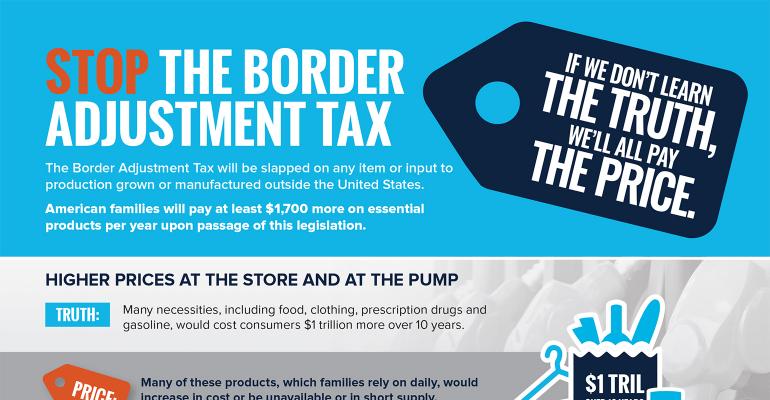 See full versions of the Americans for Affordable Products infographics below.
News>Laws & Regulations

A coalition of consumer businesses including state and national trade groups representing food retailers have banded together to oppose border taxes such as those floated by President Trump in recent weeks.

The group, which calls itself Americans for Affordable Products, said the Border Adjustment Tax would cost American families $1,700 more for the products they buy every year and up to $1 trillion for all consumers over the next 10 years.

“[T]he Border Adjustment Tax is harmful, untested, and would put American retail jobs at risk and force consumers to pay as much as 20% more for family essentials,” Retail Industry Leaders Association President Sandy Kennedy said in a statement issued by the new coalition Wednesday. “We are committed to working with Congress to ensure they understand the impact of this proposal, and to pursue tax reform that reduces rates and benefits American consumers.”

The president suggested an import tax as a means to pay for border security measures promised in his campaign. Although details have not been announced the proposed 20% tariff on importing such items would wreak havoc for food retailers. According to the USDA, the U.S. imported $21 billion in food products from Mexico in 2015.

The group, which is urging Congress to reject BAT proposal, is careful to frame its dissatisfaction in terms of concern for its ultimate impact on consumers.

“While members of AAP oppose the BAT, they recognize the hard work by members of Congress to reform the tax code and support provisions such as lowering the overall corporate tax rate and the territorial tax approach, which limits taxes on U.S. companies to income earned only in the United States,” the group said.

Separately on Wednesday, a corporate watchdog group called SumOfUs petitioned Walmart CEO Doug McMillon to denounce the president’s immigration order banning refugees. McMillon is among a panel of business leaders advising Trump. Of that group, just two CEOs, Travis Kalanick of Uber and Elon Musk of Tesla, have spoken out.

“We know that most CEOs support immigration, and almost all have employees that will be impacted by the ban — but swayed by Trump’s new position, they are afraid to speak out publicly and looking after their own interests and profits over the basic human rights of their employees, customers and vulnerable refugees,” Nicole Carty, senior campaigner for SumOfUs, said in a statement. “Making matters worse, they continue to validate Trump’s violent agenda by serving on his advisory council. This is unacceptable.”

The Americans for Affordable Products group states its case with these infographics: