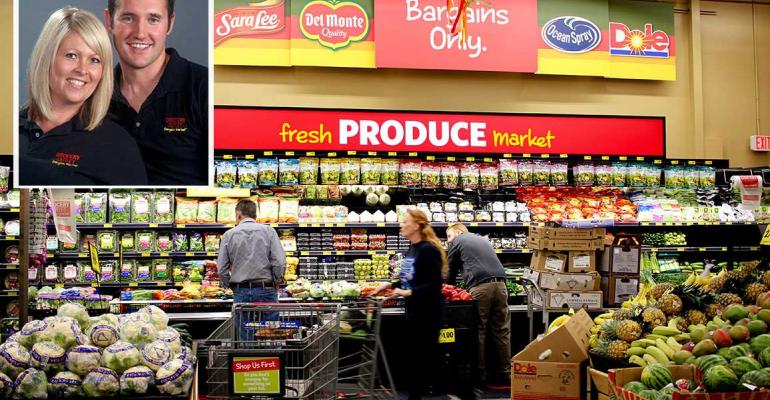 &ldquo;They provide all the infrastructure so we can concentrate on what matters, which is growing sales. They set up the store for us, and then we come in, place orders and concentrate on running the business.&quot; &mdash;Jonathan Lawton, Grocery Outlet licensee

Mom-and-pop stores ain’t what they used to be, if Grocery Outlet Bargain Market is any example.

The growing chain of extreme-value discount stores is owned and operated by individual licensees — usually a husband-and-wife team — and combines the strength of a large buying organization with the entrepreneurial spirit of local owners who merchandise directly to the communities in which they operate.

Grocery Outlet, based in Berkeley, in Northern California, is in the midst of a major move into the Los Angeles area, with 10 stores already opened since December, 10 more due before the end of 2016 and another 12 to 15 in 2017.

A typical Grocery Outlet store is the 10,000-square-foot location operated by Jonathan and Jennifer Lawton, a married couple who re-located from Northern California to open a former Fresh & Easy under the new banner in February in an affluent section of Long Beach, Calif.

The Lawtons originally worked at a Grocery Outlet in their hometown of Chehalis, Wash., before running their own stores in Northern California over the past 10 years — first in Vacaville, then Chico, then Oroville — and opting to move with their three children to Southern California.

According to Jonathan, they jumped at the chance to re-locate “because Los Angeles is one of the largest grocery markets in the U.S.”

He and his wife also had more personal reasons, he added. “When we explored the locations Grocery Outlet was offering, we chose Long Beach because it was the store closest to the beach. That’s what made it such an easy decision — with three kids, the beach is right in our backyard,” he explained.

As for moving into a market with a store whose brand was pretty much unknown, he said, “We believe nobody does discount stores like Grocery Outlet does.”

Asked why the chain prefers its stores be run by husband-and-wife teams, Jonathan replied, “Because they get two for the price of one. This job takes up so much time and energy that, when we go home, we can continue to have like-minded conversations about the business.”

According to Eric Lindberg, co-CEO of Grocery Outlet, nearly 80% of all licensee-owners are married couples. “We have a long culture of families in our company — families work well because they tend to agree on the big things, and they can work out the smaller issues.”

Jennifer Lawton said she and her husband like being hands-on owners. “Knowing the store is ours is a big deal. We look at it as part of our family, and we want to be here all the time to make sure our customers as well as our employees are being taken care of.”

Their basic operating philosophy, Jonathan said, is “to try to turn one customer into two” through exemplary service and giving consumers what they want.

The corporate parent — “our partners,” according to Jonathan — provides support in product selection and distribution, marketing, real estate, store fixtures and IT, while the owner-operators are responsible for hiring, salaries, bookkeeping, accounting, utility payments and point-of-sale equipment.

“They provide all the infrastructure so we can concentrate on what matters, which is growing sales,” he explained. “They set up the store for us, and then we come in, place orders and concentrate on running the business.”

According to Lindberg, “It’s an equitable mix of what each of us pays for. We own the inventory and they buy on consignment, and once the product is sold, they earn a commission and we get a share of the gross margin.”

Jonathan said he’s talked to a lot of former independent operators who have become Grocery Outlet licensees, “and they’ve told us they get more support here than they used to get from their wholesaler.”

The biggest lesson the Lawtons have learned since opening their first store a decade ago is how to delegate, Jonathan said.

“Initially we tried to do it all on our own, but that’s not what owners are supposed to do. Our job is to hire, train, schedule and plan. If we do those things, then we can focus on operating the store.”

All Grocery Outlet stores across the chain look alike in terms of signage and décor, he pointed out, “but the product mix is up to us. We’re able to order what we need, and we use end caps to display those items that will appeal to our specific mix of customers.

“There are more products available than can fit in the store, and we have to figure out what mix is right for us, so there’s flexibility within Grocery Outlet’s scheme. That’s why this system works so well — because we’re able to make decisions at the point of sale based on our knowledge of our customers.”

As customers enter, there’s a wall of bargains to their immediate right. “If we don’t change those items twice a week, then we know they are the wrong items,” Jonathan explained. “That’s how fast we expect items on that wall to turn.”

Since opening in early February, the Lawtons have made “huge adjustments” to the product offering, he said, including increasing space for natural, organic, specialty and healthy foods (NOSH), which account for 15% of sales — expanding product offerings beyond one side of a gondola to also encompass every end cap in the store.

“In cereal, for example, we’ve added more organic cereals and eliminated many of the high-sugar varieties,” Jennifer explained. “And when it comes to snacks, we have a lot of moms shopping with us for their kids, so the healthier NOSH-style snack items sell well.”

With produce, located at the back of the store and accounting for 20% of sales, the Lawtons have allocated additional space for small dump bins as sales or seasons warrant.

The produce sections of the Grocery Outlet stores in Los Angeles have been offering some bulk items by the pound in addition to packaged merchandise, following tests last year in the San Diego marketplace.

“That’s the way customers are used to buying produce, which enables them to judge prices against the competition,” Lindberg explained.

According to Jonathan, “We’ve been testing produce by the pound on items like potatoes, Roma tomatoes and peppers, and though the test is open-ended, we expect to continue to sell more produce items in bulk because it’s working out so well.”

However, Lindberg said there are no plans to take the program chainwide.

Because Grocery Outlet buys opportunistically to get the best deals, the brands available week to week may be inconsistent, Jennifer pointed out, “and we strive to educate customers to make sure they understand that, which requires a lot of communication.

“So we train our crew to educate customers about the mix and what they can expect on each visit. Once customers understand that, it’s not a problem.”

Education often starts with employees identifying new customers, she pointed out. “Very often, first-time customers are people who have their arms filled with groceries because they came in to look without intending to buy anything — or else we may get the opportunity to educate a customer when she asks why she can’t find a brand she bought on a previous trip.”

According to Jonathan, “The employees are trained to converse with customers and explain how our system works — that 70% of what we sell is bought opportunistically so part of the mix is always changing.

“What doesn’t change is the other 30%— milk, eggs, bread, produce and fresh meat. But the items in grocery, delicatessen, frozen foods, beer and wine may change, and we tell them that’s where they can find the best values.

“When we spend just one minute with a customer, they often forget that we didn’t have a particular brand.”

Grocery Outlet prices are clearly visible in black ink on yellow shelf tags, with an “elsewhere price” at the bottom — a comparison determined by Grocery Outlet’s buying team at the corporate office, Lindberg told SN, using a combination of specific conventional operators on a regional basis.

While most price comparisons are general, with no specific competitors named, some at the Lawtons’ store are occasionally directed at the Stater Bros. Market directly across the street, Jonathan noted, with those items usually featured on an end display or the store’s wall of bargains.

The company runs a single weekly flyer for all stores in the area, with items selected centrally. It also uses emails to issue “wow” alerts about special deals; the emails may also offer random deals — special discounts on certain items or dollars-off coupons — on a store-by-store basis, as determined at corporate, Jennifer noted.

Grocery Outlet likes its owners to be part of their communities. According to Jennifer, “We put our kids in the local little league, and we got involved in non-profit groups, like the chamber of commerce.”

“But a lot of what happens happens within the store,” Jonathan added. “We engage one-on-one with customers, and that’s how we make the majority of community contacts, which leads to positive word-of-mouth.”

Signs from the company displayed across the front of the store support the personal efforts the owners are making.

“A local family owns and operates this store,” says one. “We do the right things for this neighborhood.”

According to another, “Our shelves are reserved for bargains. If it’s not a good deal, you won’t find it here.”

The Lawtons became interested in Grocery Outlet when Jonathan got out of the Navy in 2005. Already married, they opted to go to work for her uncle, who owned a Grocery Outlet in their hometown of Chehalis, Wash.

Within a year, the couple was invited by Grocery Outlet to enter its Aspiring Operators and Training program, and in 2006 they opened their first store in Vacaville, Calif., a bedroom community about 50 miles east of San Francisco.

The store was 9,500 square feet and had not done well under its previous owner, Jonathan noted. “We cleaned it up,” he recalled, both literally and figuratively, by improving customer service and tending to other basics.

The Lawtons were able to build sales off the customer base that had remained with the store, relying on word-of-mouth to let the rest of the community know the store had changed for the better, he pointed out. “We followed our basic philosophy, which is to try to turn one customer into two through better service,” he explained.

Volume rose 20% within a year, and the company offered the couple the chance to operate a 20,000-square-foot Grocery Outlet in Chico, 170 miles north of San Francisco. Relying again on basics, Jonathan said they boosted volume 30% over the next two years.

In addition to improving service, they invested a lot of money into low prices, he recalled. “Chico is one of the lowest-income areas in California, so we merchandised the store based on what our customers wanted and shrunk margin on key items to meet their needs.”

The offer to move to Southern California followed, he said.