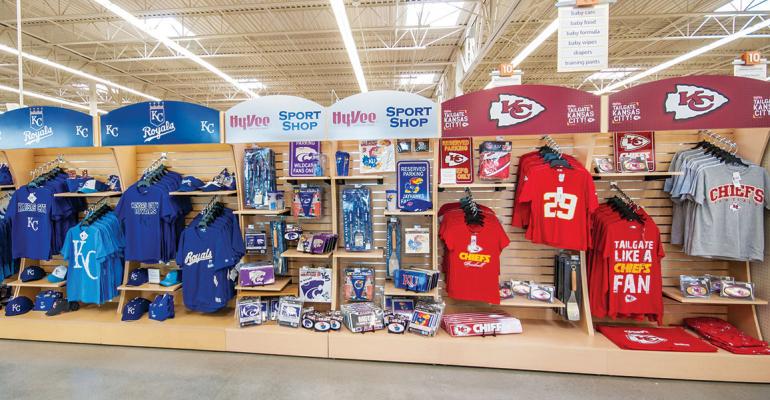 <p>In the eight states where it operates, sports marketing has allowed Hy-Vee to get behind the community.</p>
News>Marketing

Sports-related tie-ins have long been an important component of Hy-Vee’s marketing strategy, and lately they’ve taken on an even bigger role.

“Sports marketing is important to us,” said Donna Tweeten, SVP and chief marketing officer at Hy-Vee. “In the states we operate in, there is a strong community connection to these teams. These tie-ins allow us to really get behind the community, and support them as they support their teams.”

In the Twin Cities area, she said, the Vikings have a very strong following, especially in terms of TV viewership.

“In Minneapolis, the stores opened up with huge volumes, and the majority of that was because people knew and had heard of Hy-Vee long before the brick and mortar came into the town,” said Jon Wendel, EVP and chief merchandising officer. “I think that’s going to carry Hy-Vee for years and years to come.”

He noted that sports marketing can be an especially effective form of TV advertising because so many fans tend to watch the games live, rather than record them and fast-forward through the commercials as they might do with other TV programming.

In addition, the exposure of in-stadium sponsorships during sports broadcasts can often extend well beyond the local market. In the 2015 World Series, for example, Hy-Vee’s name was seen across the country — and around the world, for that matter — over and over during broadcasts from the Kauffman Stadium, home field of the Kansas City Royals.

Expanding into Minneapolis took more than just sports marketing, however.

“We knew that we had to be ready from day one,” said Wendy Hiatt, VP of brand and image marketing. “We had a lot of information out there — we were involved in a wine and food fair several months out, and our store director got involved in local causes, so people were getting to know us.”

She said customers really don’t fully understand Hy-Vee’s friendly customer-service proposition until they visit the stores in person, however.

“We can tell people we are helpful, and they can hear about it from former customers who are living up in the Minneapolis market, but they really have to experience it for themselves,” she said. “That involves operations, getting the right managers up there to train the new employees, and making sure that customers have the right experience from the minute those doors open.”

She noted that the successful opening of the first two stores — with customers coming from farther away than expected — has led to requests from people in nearby areas to open more stores in their communities.