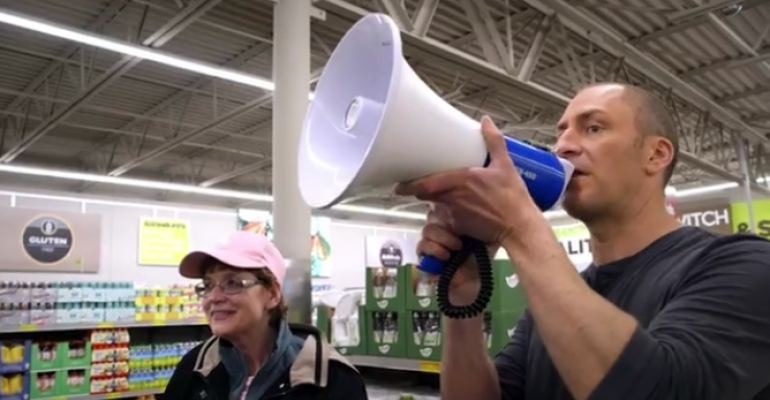 Aldi USA has launched a new ad campaign and web series featuring comedian and television host Ben Bailey, who plays up the brand’s “unique and quirky” attributes as a means of introducing it to new shoppers.

Bailey, best known as host of the television series “Cash Cab,” surprised hundreds of shoppers at an Aldi store in Chicagoland in late April. He posed as an Aldi employee throughout the day, casually handing out wine and cheese samples, replenishing the produce aisle and doing price checks, while quizzing shoppers on their “Cart Smarts.” These candid moments are captured in a new online video series that launched Tuesday at lovealdi.com.

Aldi said the campaign would help introduce the brand to new customers across the U.S. and in Southern California specifically, where Aldi plans to open 45 new stores next year.

"I had a blast interacting with customers at ALDI and was amazed by how passionate they are about the savings, quality and selection of their groceries. People were quick to call out their favorite products and how much money they save each month," Bailey said in a release. "While Aldi does things a bit differently, you grow to appreciate the quirks as you get to know the Aldi way, especially when you realize how those quirks save you money. Once you're in, you're instantly hooked."

Aldi hopes to capitalize on rising demand for lower prices and quality. According to a new study commissioned by the retailer, 61% of U.S. adults said it was too difficult to eat healthy and organic on a budget, and nearly eight out of ten respondents said they would buy fresh, high quality and organic products if they weren't so expensive. Aldi boasts of prices for high quality fresh and organic items up to 50% less expensive than traditional grocers.

"With nearly 40 years in the U.S. market, we are excited to celebrate the Aldi story and highlight our smarter shoppers by putting a fun, humorous spin on it," Liz Ruggles, Aldi’s director of public relations, said in a statement. "Our vision for these videos is to drive awareness and education among new customers in a memorable way. Ben Bailey was the perfect choice to help us share that story with the California market. We're hoping these videos give people a laugh and inspire them to shop at Aldi."