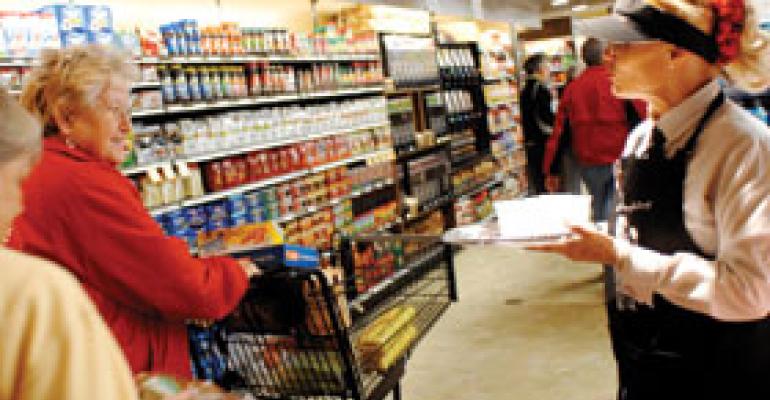 In-store sampling events for better-for-you foods and beverages are taking hold as retailers look to supplement storewide health and wellness initiatives. Themed under such topics as organic, women's health and diabetes awareness, such programs enable stores to tie in food with pharmacy and other store services, thereby positioning their stores as a source of wellness information and products. Winn-Dixie

Themed under such topics as organic, women's health and diabetes awareness, such programs enable stores to tie in food with pharmacy and other store services, thereby positioning their stores as a source of wellness information and products.

“There tends to be confusion between the two terms, especially because Certified Organic products are more expensive than natural,” Silverman told SN.

In clarifying the difference, Winn-Dixie hopes to position its stores as a destination not only for wellness products, but also information.

Using demonstrators educated about natural vs. organic was critical to the success of the demo, Silverman said. Including multiple brands created more atmosphere and in-store excitement.

“By creating a ‘tasting fair’ environment, our customers were able to sample a variety of products,” he said.

The multi-brand format also allowed the retailer to include some of its smaller-scale suppliers that have limited budgets for sampling events.

“The consumer trends are motivating retailers and CPG companies to expand the trial of their improved or new healthier products,” said Nakken. Along with positioning their stores as a destination for wellness information and products, better-for-you product demonstrations send a message to consumers that retailers, and the brands they sell, care about them, she added.

Indeed, sampling of wellness products — whether organic or low-fat — helps consumers understand why certain items like organic may be more expensive than mainstream counterparts.

On a scale of 1 to 10 (10 being the most important), health and wellness consumers give sampling a 9.1, according to Mass Connections research. Sampling was also given high scores by parents (8.3) and junior-seniors (7.8).

“An eye-popping 75% of consumers are more likely to walk through the doors of a store they know frequently offers free samples to shoppers,” said Nakken.

Save-A-Lot addressed the disease because its shoppers have a much higher average percentage of diabetics in their families than the national average of 8% — more than 30%.

“Unfortunately, many disease states tend to skew toward lower-income Americans due to a lack of access to quality health care and fresh food,” said Mark Kotcher, Save-A-Lot's national marketing manager. “What's unique about Save-A-Lot is that we build stores in neighborhoods that other traditional grocery stores have pulled out of and fill a key unmet need in the community.”

The American Diabetes Association provided the expertise Save-A-Lot needed to best engage its shoppers. Samples of diabetic-friendly recipes were distributed to educate shoppers about the many healthy alternatives Save-A-Lot offers shoppers.

A shrimp recipe was chosen because of its low fat and high protein content. Participating Center Store products were seasonings like pepper, garlic and flour.

Tying sampling to key health initiatives like diabetes awareness offers Save-A-Lot the opportunity to merge experience with education and provide better long-term results that truly change behavior, said Kotcher. “It isn't enough to simply hand a shopper a pamphlet, we want to educate and inform, and form a two-way dialogue with our shoppers,” he said.

The entire store at each of PCC's nine locations — including deli, produce and Center Store — participated, according to Roxanne Winship, PCC's demo coordinator.

PCC typically plans themed healthy events a year ahead so that it can get sufficient manufacturer participation. One such event is its “Rewards of Fair Trade” sampling events, held every October for the past four years to celebrate Fair Trade Month.

Shoppers could sample varieties of chocolate, coffee, tea and other fairly traded products, and get information on why sustainable products are important.

PCC relies so heavily on product sampling because it believes if shoppers try it, they'll buy it. “It's important to make trial of a product easy for customers and to help them get the most enjoyment and value out of purchasing it,” Winship said.

When PCC holds vendor demos, it encourages participation from as many different manufacturers as possible to give shoppers as many product experiences as possible. It also gives manufacturers valuable feedback on everything from taste to packaging.

“Honest Tea educated the consumers on the benefits of organic and Fair Trade tea, while hydrating them with a delicious alternative to highly sweetened non-organic beverages,” an Honest Tea spokeswoman told SN.

The healthy sampling trend gains momentum during the New Year, when retailers use such events to accommodate those who made New Year's resolutions to live healthier lifestyles.

On Jan. 17, for instance, a Wegmans “Get Back on Track” event included samples of healthy and affordable meal ideas.

“'Twas the season of parties, dinners and gourmet gift baskets, and now it's back to reality — watching what you eat and what you spend,” Wegmans wrote in recent promotional materials. “We'd like to help you to get back on track in healthy, easy and affordable ways.”

The free, chainwide event featured sampling stations in each department of the store. In the grocery department, samples of whole grain cereals were distributed.

Marketing services company PromoWorks in Schaumburg, Ill., has been organizing more diabetes, heart-health and health-oriented events at the behest of retailers, according to CEO Mike Kent.

“Many retailers are collaborating with manufacturers to create a themed event that appeals to a wide demographic,” he said.

The advantage of health-oriented events is that retailers can tie in the pharmacy and other parts of the store. This helps them in their efforts to position themselves as a destination.

Diabetes is one such theme. When PromoWorks organizes such events, they typically include the presence of a health care professional who checks glucose levels, plus product samplers who hand out trial sizes of products like Glucerna diabetes-friendly snack bars.

“Retailers are looking to become a greater destination for consumers so people don't have to go to five different stores to get the products they want,” he said.