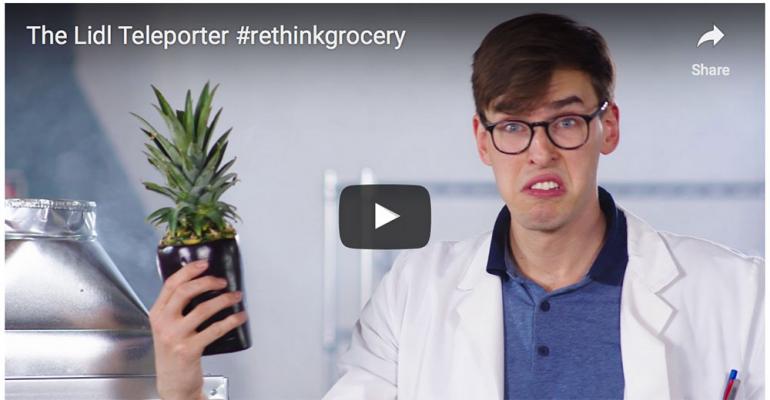 How Lidl sells efficiency as a virtue

A man wearing a lab coat with a pocket protector and a catcher’s mask stands before a blackboard with a schematic drawing of a “produce cannon” intended to blast an orange into a plastic bag.

The predictable failure of this and similar “experiments” provide the basis for a series of web ads promoting Lidl, the hard discount store that recently began a U.S. rollout.

The series provides Lidl with an opportunity to showcase its points of difference — namely more efficient operating processes enabling lower prices. After the orange bypasses its intended target and splatters on a wall, the scientist/spokesman explains, “Instead of stacking our produce in pyramids, we get them from the truck to the shelf as quickly as possible. That’s efficiency.”

Other ads in the series use the same “lab” setting and inventions — a rocket shopping cart, a fresh food teleporter and a robot baker — to highlight efficiency as a virtue, covering processes like frequent deliveries, employee training and limited selection.

The ads were created by the social media team at Lidl US for use in that medium, a company spokesman said.