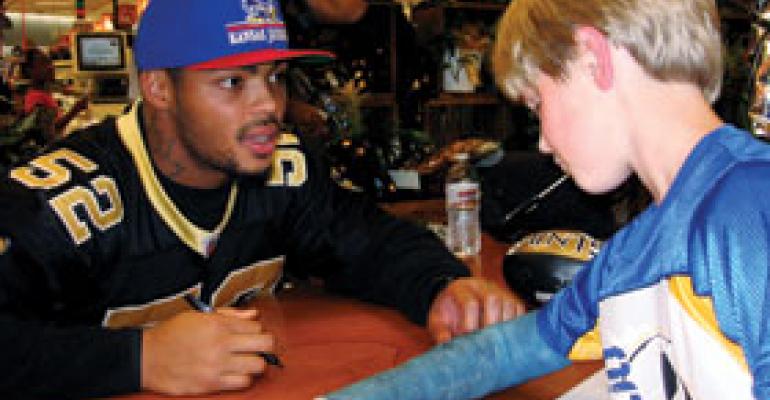 Football season is here, and retailers are offering a flurry of promotions to satiate hungry fans.

As an official sponsor of the Jacksonville Jaguars and the New Orleans Saints, Winn-Dixie Stores, Jacksonville, Fla., makes sure to prominently feature its tailgating area.

“All of our stores have extensive signage … the tailgate items are close to the front of the store in displays. We try to make it as easy as possible for our guests to come in whether it's the chips, the salsas, the beverages,” Hunter Robinson, communications specialist for Winn-Dixie, told SN.

Platters are always popular for game-day parties, and Winn-Dixie adapts its platters in the bakery and deli departments depending on local customer preference.

“Each store is different. We try to tailor our stores to the neighborhoods so we may have some different offerings in New Orleans than we do in Jacksonville or Miami,” Robinson said.

With Winn-Dixie's Neighborhood Butcher Program, the butchers walking the store can let shoppers know that they offer meat cut-to-order for tailgating and home entertaining. The tailgate area has a cooler with a prepared meat or vegetable where the butcher's services are advertised.

In certain stores, the deli offers a GoMoJo signature sub. Named after Jaguars running back Maurice Jones-Drew, the Italian sub is made with extra olives, just the way Jones-Drew likes it, according to Krista Beres, public relations account manager for Winn-Dixie.

Throughout the season, Winn-Dixie customers have opportunities to win tickets and interact with their favorite players. Shoppers can enter to win free tickets and a private tailgate party by buying certain tailgate items listed in the front of the store.

Since Winn-Dixie receives tickets as part of its sponsorship, it came up with the program to use the tickets to show its support for the community, Beres said. Winn-Dixie also hosts food drives that feature both a cookout and NFL players in attendance.

To showcase its selection, on weekends this month Giant Eagle is offering in-store samples of traditional tailgating foods, such as skinless hot dogs, and sausage and hamburgers made fresh in the meat department. Giant Eagle calls attention to in-store specials in a tailgating section of its website.

For people looking to expand their menu for entertaining and game home viewing, this portion of the website has an instructional video showing how to make a homemade buffalo chicken dip using a rotisserie chicken, cream cheese, hot sauce and blue cheese dressing. There are also recipes available for dishes such as Italian Parmesan Wings and Layered Fiesta Dip.

Rouses is doing its part to help customers host impressive game day parties with the chef-hosted event “Tantalizing Tailgating,” which is being offered through the month of September in several store locations, according to the retailer's website.

At Winn-Dixie, Robinson said the shoppers tend to be preparing for both tailgating and entertaining at home. In addition to NFL fans, many enthusiastic tailgaters focus on college football. “We're in a lot of the college towns [where] they're very excited about their college football. They pack their coolers and do everything on site,” Robinson said.