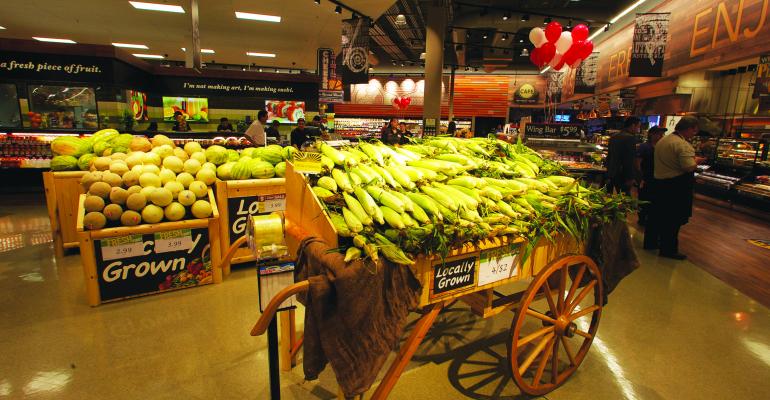 When it comes to doing local, size matters. So too does speed.

Those are two lessons Strack & Van Til has learned after testing new local produce offerings at select stores over the summer. Size matters because buying from small suppliers only allows the retailer to cover a limited number of stores, explained Dave Negron, VP of perishables and fresh at the 38-store operator. Speed, he said, is required to take advantage of buying opportunities when they arise.

“For us it’s about being more nimble than the others,” Negron said. “We need to get the information as to what’s out on the market, what’s getting picked in the fields and the amount of product available so that we can decide which of our stores can take advantage of the opportunity.”

Negron joined the Highland, Ill.-based retailer a year ago after 30 years at neighboring Jewel-Osco. He said the opportunity to do direct buys from small suppliers for a few stores at a time is one advantage independents can have over their larger competitors.

Negron and his team launched a local produce initiative last summer buying cauliflower, peppers, corn, cabbage and other items grown on small farms from a small supplier in Michigan. Many of the items debuted in the company’s ambitious new 89,000-square-foot replacement store in Schererville, Ind., that opened last August.

The store prominently displayed the local produce with signage calling out their origin, and customers responded “extremely well,” Negron said — pleased not only with local positioning, but also the quality.

“Turning products straight from the fields to the stores, from a quality perspective is completely different,” he added. “You’re moving product much quicker than normal.

“The challenge is logistics,” he added, “and being able to source enough product for a company our size. If you have 38 stores oftentimes you won’t get enough product for all of them. So for us it becomes a targeted approach. We’ll look to support six, eight or 10 stores, possibly only four. And we’ll target the ones that will best support the locally grown product.”

Negron is quick to add that in-season local produce buying is only part of the local game plan at Strack & Van Til. “We’re very sensitive to all suppliers that are local,” mentioning Indiana-based businesses like Albanese Candy — a leading supplier of gummies — and bakery suppliers United Pies and Café Valley.

As far as produce, work is underway at the company to extend its buying efforts directly from farmers in the coming months. Included in the discussion is offering “field trips” for customers to visit farms, and having suppliers appear at events including outdoor “farmers' market-style events."

“I think local has become very important for our customers, especially in Northwest Indiana. They appreciate products that come from their own region,” Negron said. “They appreciate supporting local growers and local businesses. There’s a hometown feel here, even more so than in Chicago.”