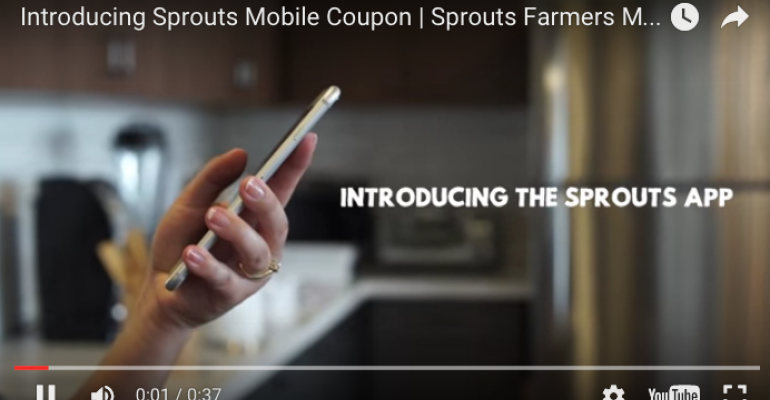 Sprouts Farmers Market is looking to a newly launched mobile application to provide "one-on-one" insight into its shoppers.

Speaking at the BMO Capital Markets Farm to Market Conference Thursday in New York, Sprouts CFO Brad Lukow said the app — which the Phoenix-based retailer "soft launched" this spring — allows users to customize preferences based on dietary needs and foods they like, and allows Sprouts in turn to push out relevant coupons, offers and new product announcements based on that customer's purchase history.

"I think we're in a good space in terms of building out something that's particularly relevant, that's going to add value to the consumer, that's going to build loyalty,"  Lukow said. We can push out more information, whether it be vitamins or different types of dietary needs for the specific consumer."

Lukow said the app has already collected 400,000 unique users, adding to some 2.5 million weekly social-media interactions. "So, the big opportunity for us is to get the one-to-one communication through this mobile app."

Jim Nielsen, Sprouts' president and COO, added that the company has so far done little promotion for the app beyond signage in stores. The company will begin a three-month formal rollout in June.

"We wanted to make sure that we've ironed out some things on the app, and that we had enough coupons to make it robust. We still feel like there's a lot of room there for us to enhance the app, and we'll continue to do that," he said. "But we'll roll it out in a methodical way. We're going to do more of a grassroots in our store locations so that we can actually connect to the consumer and describe more what they're going to get, maybe provide a little bit incentive. But we'll do it market by market."