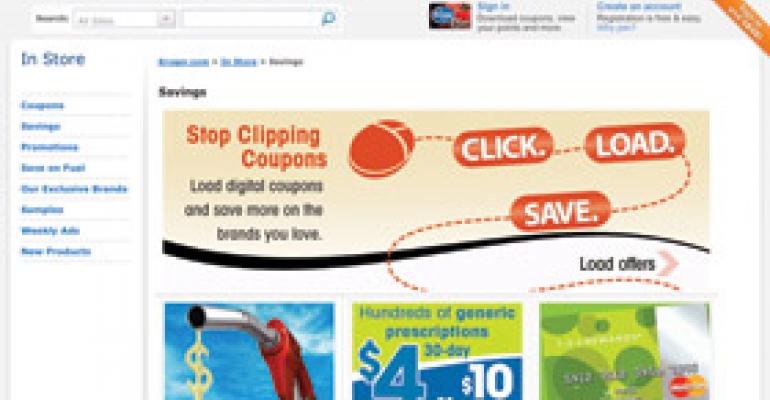 This time, it's personal. Food shopping, that is.

Safeway early this year launched its Just For U program, a website that generates custom offers — and custom prices — for shoppers based on their purchase history. Ahold this summer sent personalized offers to 2.5 million shoppers of its Stop & Shop banner, while testing an evolution of its Scan It! program delivering customer offers in-store through a dedicated mobile phone application. Other companies including Target said they would look into more custom offers.

These new efforts in the personalization game follow earlier adapters like Kroger Co. and Harris Teeter — not coincidentally, two companies whose respective sales performances have inspired envy among competitors — in focusing promotions with more precision and relevance than ever before.

For shoppers, the ability to find deals on the items they shop for most can be a powerful attraction, and retailers who execute it right can realize gains in loyalty, trips and sales, sources said.

“There's no question,” said Ken Wyker, president of Circular Logic, a Charlotte-based company specializing in personalized weekly sales fliers for retailers. “This is where everybody is going.”

While grocery companies have been fostering efforts to strengthen their relationship with their shoppers for years, one difference today is that retailers — and shoppers — have grown more comfortable with electronic media, allowing for more powerful and sophisticated personalization.

“Retailers are recognizing the power and profitability of electronic alternatives to traditional print methods and direct mail that is harder to personalize,” Wyker contended. “The [electronic] medium is capable of incredible personalization, and that's the way you can leverage your personalization efforts. Technology growth and adoption has been huge in helping this grow, and it will only grow stronger.”

Yet despite a seemingly limitless future — some feel personalized offers will one day distinguish grocery as a channel of trade — questions remain about how well retailers can execute on the promise, and how receptive consumers will be. The effort in many cases will require retailers to re-think their strategies around marketing and promotions and will change the nature of their relationships with shoppers and suppliers.

“Personalization is kind of a magic word today. Everybody knows they need to do more of it but there are questions below that,” said consultant Bill Bishop, chief architect at research firm Brick Meets Click, which studies technology-driven retail communications. “‘How do we do it?’ And even more nagging, ‘How well are we doing it?’”

Bishop in an interview with SN acknowledged that growth in technology has allowed for personalization to take new forms and gain greater trial by retailers and shoppers, but said the supermarket industry is still short of gaining what he called “critical mass” around the concept.

“I would argue that we're currently in a situation where it's hard to see a retailer that has done a good job getting all the way to critical mass on personalization. And by critical mass, I mean the ability to move the needle from where you'd otherwise be on sales,” Bishop said. “That's not to say they're not benefiting from it, or that what they're doing isn't working, but there is still opportunity to bring it together.”

It's difficult these days to find a chain retailer that is not involved in some form of communicating “personal deals” to shoppers, using data from loyalty cards to drive loyalty, frequency and sales. Greg Steinhafel, chief executive officer of Target Corp., Minneapolis, said that company would look to purchase data from its Redcard credit and debit holders to craft more custom offers in the future.

“We're going to mine data to the extent we can,” Steinhafel said late last month at an investor conference. “We clearly recognize that mobile, customized, personalized offers are really, really important in the future. And we'll continue to aggressively pursue that.”

In introducing its Just For U program earlier this year, Steve Burd, chairman, president and CEO of Safeway, Pleasanton, Calif., described a “dialogue” between Safeway and its best shoppers over “personalized pricing.” He said the concept was “revolutionary” in its ability to price items at the point where each individual shopper will buy.

These increasingly sophisticated efforts can be traced back through the evolution of loyalty cards and the web — all the way to the birth of supermarkets themselves. Stuart Aitken, CEO of Dunnhumby USA, the Cincinnati firm that provides shopper data analysis that Kroger, invoked that chain's founder in an article about Dunnhumby's efforts facilitating personalized offers to Kroger's best customers published in a company newsletter.

“In 1883,” Aitken wrote, “Barney Kroger invested his life savings of $372 to open a grocery store in downtown Cincinnati. There's no doubt he knew the names and product preferences of each and every one of his regular customers — his very livelihood depending on treating them well.”

A similar attitude guides Kroger's Loyal Customer Mailer (LCM), a quarterly offering sent to around 7 million of the chain's best shoppers — no two alike. Launched by Dunnhumby in 2005, the LCM has evolved from a segmented marketing of Kroger-branded products to reward offers from brand manufacturers. By late 2009, more than 50% of the households that were sent offers redeemed at least one coupon. Targeted shoppers delivered more than $5.4 billion in incremental sales between 2005 and 2009, Aitken said.

“Our efforts at personalization are a real differentiator for us, especially in regard to building customer loyalty over time,” Kroger spokesman Keith Dailey told SN. “Our mailings are very personalized, relevant coupon offerings that are targeted to your household and personal preferences. You're not going to receive an offer for something you don't need or don't like.”

John Caron, senior vice president of Quincy, Mass.-based Modiv Media, said the evolution of consumer technologies — namely, the smartphone — is providing for the next step in the evolution of personalization. His company provides the Scan It! application now testing in three Boston-area Stop & Shop stores, and is also providing a mobile app for an unnamed food retailer set to launch in the fourth quarter this year.

The Scan It! mobile app builds off the Scan It! system devices already in Stop & Shop and Giant stores. It allows shoppers to scan, bag (and coming soon, pay for) their own purchases while in the store. The system is capable of delivering custom offers using loyalty card data, items in the cart and even a shopper's location in the store using wi-fi triangulation.

“We give the retailer the ability to drive a very engaged conversation with their shopper while they are in the store, that is personalized to that trip,” Caron told SN. “Mobile has extraordinary potential with regard to what we can do around personalization and influencing shopper behavior while they are in the stores and their wallets are open.”

Overall, personalization strategies tend to vary by retailer, with some more advanced than others, said Wyker of Circular Logic. Sophisticated transaction analyses have evolved leading strategies beyond earlier efforts of clustering shoppers by demographics, he said.

“All retailers have programs where they sign people up and will communicate with them on a somewhat personalized manner,” he said. “The difference is in the sophistication of the personalization. A lot of folks think personalization is segmenting as in ‘you're an upscale empty-nester’ or ‘you're a college student.’ True personalization is ‘you buy X, you like X, here's your message.’ And it resonates with you because it's truly personalized. That takes a level of data analysis that many retailers can't do.”

Circular Logic's efforts involve delivering personalized weekly ads for retailers (Charlotte-based Harris Teeter is identified as one on its website). Wyker noted that the effort is data-driven and focused on building sales behind pricing efforts, and so by definition is not based on a relationship or a lifestyle.

“We're not personalizing so as to say, ‘We know you, here's what's going on in town.’ It's not a social networking feel,” he said. “We do it to give you a reason to go to the store. That's by design, but is also a shift in perspective from, ‘I'm personalizing this because I want to know my customer and relate to them.’ That's part of it, but fundamentally, we're trying to help the customer save money at the store.”

Down to the SKU Level

Some evidence is emerging that a truly personalized shopping offer works on multiple levels. A recent consumer interview by Bishop's Brick Meets Click group revealed that personalization “is a multi-dimensional experience rather than a discrete, singular component of shopping.”

“It touches the shopping experience before and during the trip — and it adds the greatest value to the shopper's experience when all dimensions are working in a coordinated fashion.”

The shopper interview illustrated some perceived highlights and shortcomings from a regular Safeway shopper using the retailer's Just for U program. For example, the shopper praised the program for providing an effective means to “shop the store” when planning her trip, but noted some offers didn't ring as truly personal (offering a 2-liter Coke to a shopper who buys 7-Up in six-packs).

Retailers ought to be particularly concerned with the latter phenomenon, as a false offer can erode confidence in the retailer, Bishop told SN.

“Personalization goes right down to the SKU level,” Bishop said. “Package size and brand size makes a difference. And if personalization doesn't go all the way to that level, it's a little wanting.

“When somebody says it's a personal offer, and it's so flagrantly not, it shakes your confidence in the whole thing,” he added. “Shoppers are very interested in having a retailer make and deliver on the promise of personalization. And they feel a little offended, even violated, when they don't.”

Bishop said his study of personalized offers also indicates that retailers should be cautious around how they deliver the personalization. Offers transmitted through a smartphone, for example, may indicate to consumers that it's the device and not the retailer making the offer. “Surrounding the question of personalization is, ‘Who is personalizing this for you?’” he said. “I can feel that retailers are a little unsure on how to proceed at that point.”

Turning mountains of shopper data into relevant offers often takes a leap of faith, sources said. Andrew Wolf, a financial analyst at BB&T Capital Markets, Richmond, Va., said Kroger's first recommendations from Dunnhumby resulted in a set of promotions “that went against what all [Kroger's] grocery smarts and intuition told them.” Officials were convinced only after committing to trust the data. “It was like the end of ‘Casablanca.’ It was the start of a beautiful friendship,” he said.

“A lot of times it may appear counter-intuitive but you can't refute what the numbers are telling you,” Wolf added. “And it's not just a software fix, it's changing the whole merchandising culture.”

For that reason, Wolf said Safeway's adoption of Just for U was “a huge deal.”

“It puts them in the game of being a more efficient promoter,” he said. “Efficient promoting — taking the money you use to promote and being really precise as to where you put it — makes sense for everybody. And I think it's well worth the risk and the best way to go to market as a grocery chain.”

Hy-Vee antes up more perks with Plus premium membership
Dec 01, 2020

Walmart to light up the holidays with live drone shows
Nov 24, 2020