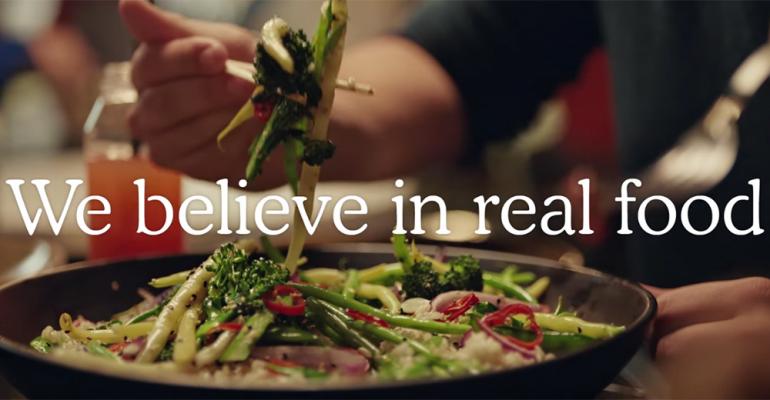 Whole Foods Market is sending the first messages from what appears to be a new national advertising campaign officials say will be “always on” in 2017.

A television ad debuting the “We Believe in Real Food” tagline has premiered on the retailer’s website and Youtube channel this week. The campaign highlights why Whole Foods’ offerings — described as “food that’s naturally beautiful, nourishing and delicious” — are different than that of competitors, and easy to shop for at Whole Foods.

CEO John Mackey late last year said Whole Foods would boost its marketing spend in 2017 with an eye on abandoning the “on-again, off-again” flirtation with a national ad presence the company has taken until now. Whole Foods last ran national advertising with its “Values Matter” campaign in 2014 but ran no national advertising last year, when Mackey said the company made a ”conscious decision” that its funds were better spent elsewhere.

Whole Foods in September named Sonya Gafsi Oblisk as its new global VP of marketing. Oblisk spent more than eight years at Wal-Mart Stores including the last three as VP of its Sam’s Club division.

Bill Kirk, an analyst for RBC Capital Markets, said the launch of a new ad campaign speaks to the company’s confidence in its progress to stabilize sales and set the foundation for growth.

He also noted the “Values Matter” launch coincided with an acceleration in sequential and stacked same-store sales figures in 2014, though current forecasts, he cautioned, call for no such boost.

“While a television ad, by no means, assures acceleration, we consider it more likely to improve trends than cause them to slow,” Kirk said.  “We believe this is a positive development that suggests Whole Foods' 2016 pursued strategies have reached a point where it's time to communicate the company's progress.”