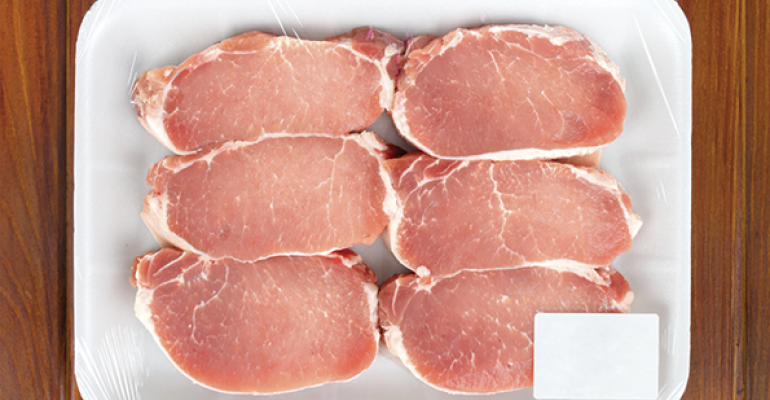 Retailers look to capitalize on improving pork prices and supply

Meat departments and the pork industry had it tough last year. Average prices soared to record highs as production dipped and farmers struggled with supply. The culprit: Porcine epidemic diarrhea virus, or PEDv as it’s known, which has killed more than 8 million piglets since it was first discovered in April 2013.

Despite this challenging climate, meat managers say they’ve avoided a major downturn in pork sales by continuously promoting the category and driving traffic to the meat case. This year, they’re banking on a return to prosperity.

At Skogen’s Festival Foods, Onalaska, Wis., meat and seafood director Mike Zimmerman has increased the number of pork products featured in the stores’ weekly ad circular. He’s also taken small steps to reduce prices, like selling pork cuts in the retail-ready bags they come in rather than removing and traying them. To attract shoppers to the meat department, Zimmerman said he’s honed in on cuts that offer high value at a reasonable price.

“Probably the best category right now is the boneless loin category,” Zimmerman said. “The quality is right for us, it allows us to make a margin, and it allows us to advertise and market a product with a high perceived value at a good retail.”

“We offered a major discount on those tenderloins recently,” he said. “It was a price that I don’t think had been seen in this area.”

Promotions like these come as a vote of confidence for an embattled category. For the 52 weeks ending Nov. 29, 2014, fresh pork prices at retail were up 12%, according to data from Nielsen Perishables Group. Last summer, in particular, saw average prices rise and rise, eventually hitting an all-time high of $4.20 per pound in August.

Despite these increases, pork is still seen as a better alternative by many consumers. Beef prices have risen by double digits over the past few years, following a widespread drought in 2012 that reduced herd populations.

“While pork prices have increased, the overall consumer price sensitivity has not increased in pork as much as in beef,” said Sherry Frey, VP of Nielsen Perishables Group, Chicago.

Indeed, retailers said they’ve seen shoppers in their stores trading down from beef to pork.

“When you look at everything, pork is quite the value,” said Jack Gridley, meat and seafood director at Dorothy Lane Market, Dayton, Ohio, who noted that bone-in chops and loins are top performers in his department.

Pork prices are expected to ease this year as supply increases. Patrick Fleming, director of retail marketing with the National Pork Board, said herd sizes are growing again as the industry has gotten a handle on PEDv. The number of reported cases has declined since last winter, when the virus was at its peak. The USDA expects pork production to increase by 4.6% this year over last year.

“We think we’ll pick up what we lost last year plus some more,” Fleming said. “I think we’re getting back to a more traditional pricing level.”

Nevertheless, the long slog of price increases in pork and beef has tested consumers’ patience. According to Frey, the pork category, along with the entire meat department, is seeing fewer customers and fewer trips per customer. Shoppers, she noted, are shifting purchases amongst proteins and increasingly venturing outside the meat case for prepared meals and other convenience purchases.

• Despite recent price increases, pork still remains a  value for many consumers. Don’t shy away from promoting the category and offering discounts through ad circulars, in-store signage and other avenues.

• Get creative with value-added pork offerings like  bacon-wrapped tenderloins and stuffed pork chops. Geissler’s Supermarkets has a “Chef Prepared” meat line that lets customers cook up flavorful dishes like Gouda- and bacon-topped pork chops without the hassle of a complicated recipe.

• Shoppers frequently shift their purchases amongst  proteins. To capture sales across categories, Sherry Frey, VP of Nielsen Perishables Group, recommends tying pork in with beef and chicken offerings, either through coupons or bundled together under a single price point.

That fact alone might not concern retailers, who are happy to keep shoppers buying under the same roof. But Frey explained that meat purchases are often the building blocks for shoppers’ baskets.

“We often say ‘as goes meat, so goes the basket’ and it’s very true,” she said. “The declines that we’re seeing in pork and beef should be raising an alarm for the entire store as consumers often choose their protein first, then build the meal around it.”

The responsibility falls on meat managers, then, to make the case for pork. Jaime Arredondo, director of meat operations at Nugget Markets, Woodland, Calif., said he considers his staff an important tool in building relationships with shoppers.

“The information you give your guest is crucial in building their trust with your store and with your associates,” he said. “So our butchers are very knowledgeable and very well trained on how to prepare pork items.”

Nilsson agreed, and conceded that his own department isn’t doing enough to engage with shoppers. Consumers still have misperceptions about how to select and prepare fresh pork, he said, noting that many still don’t know about the industry’s updated guidelines that recommend cooking pork to 145 degrees rather than 160.

“People still think they have to cook pork like their mother did,” he said.

On the product side, Nilsson said his stores recently launched a “Chef Prepared” line of value-added, ready-to-cook meat offerings using recipes developed by their in-house chef. These include a barbecue pork tenderloin and pork chops topped with bacon and Gouda cheese. Nilsson features three items every week in Geissler’s ad circular, accompanied by the line’s logo, which features a chef’s toque and the tagline: “Restaurant quality … right out of your own oven!”

“The bacon category has just been huge,” said Gridley. “We’ve been doing the line for a couple years, and it’s just now starting to gain traction.”

To capitalize on shoppers’ tendency to shift their purchases amongst proteins, Frey recommends offering promotions that tie together categories. This could include coupons offering savings on pork tenderloin, for instance, if a customer buys chicken breasts. It could also include bundling multiple meats under a single price point.

“We try to sell everything in a ready state, so all customers have to do is go home and pop it in the oven,” said Zimmerman. “But for the people that do want to have a hand in how it’s prepared, we have the seasonings and the tools available.”

The fun really begins with spring grilling season. This year, the National Pork Board will expand its promotional efforts, offering point-of-sale materials and encouraging retailers to expand their promotions linking pork and grilling. According to Fleming, the board recently conducted research that found more grilling-related pork offers would increase sales without cannibalizing from other  departments.

If all goes according to plan, sales will sizzle as the weather heats up, and stay hot throughout the year.

“We’re looking at this really to be a good year,” said  Fleming.

Sidebar: Getting a handle on PEDv

Nearly two years after the deadly porcine epidemic diarrhea virus (PEDv) was first reported in the U.S., the pork industry is showing signs of recovery.

Breeding herds are expanding along with litter rates and the inventory of market animals. According to data published by the USDA, the number of market hogs this winter increased 2% from the previous year — the first year-over-year increase since March 2013.

Overall, the USDA estimates that pork production this year will increase by 4.6% over last year and 2.8% over 2012, the last year in which the market wasn’t impacted by PEDv.

Patrick Fleming, director of retail marketing with the National Pork Board, credits the virus’s slowdown to enhanced biosecurity and containment measures undertaken by the USDA as well as the pork industry. Following the rampant spread of PEDv last winter, the USDA in June issued a federal order requiring producers to report all cases to federal or state officials.

The USDA also announced $26 million in funding to combat the virus, including $4 million toward the development of vaccines. Suppliers, including large-scale companies like Cargill, have credited the vaccines in helping to stem the spread of the virus.

In all, PEDv has infected more than 8 million piglets. And while more than half of states have reported cases of the virus since June, the overall number of cases has declined. So while PEDv hasn’t been eradicated, pork industry officials are confident they have enough of a handle on it to get back to business as usual.

“It looks like we have the disease managed at this point,” said Fleming. “This is the year for pork.”