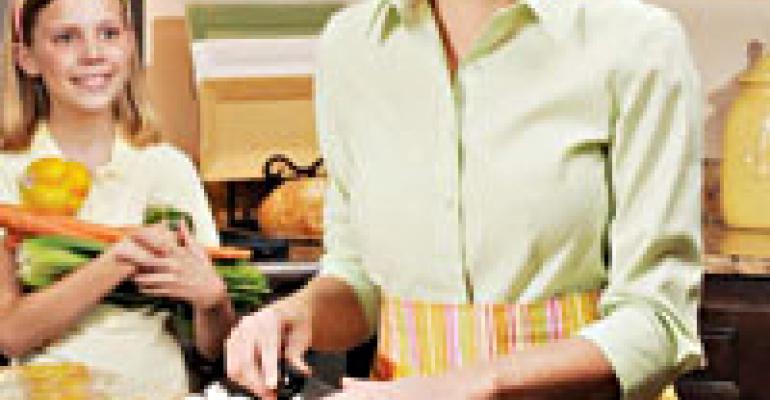 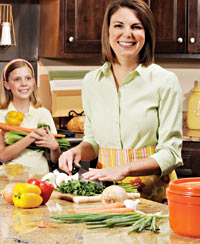 The Cooking Mom has been working with Festival Foods for the past year.

“My mission is to try and get people back to the dinner table and to get families eating together and not hitting fast-food restaurants,” said Hanten.

Hanten — who has also published the cookbook "The Cooking Mom" and maintains her own recipe blog at www.thecookingmom.com — targets her advice at busy parents who are not interested in making culinary masterpieces or spending hours in the kitchen.

“I'm not an Emeril. I'm not a Martha. I'm just trying to help people put really good food on the table quickly using some of the things that they have at the grocery store.”

Hanten's recipes use a quick set of ingredients and often promote Festival's fresh products as an easy shortcut for customers with hectic schedules.

“So I'm just a big believer in make one thing and then let the grocery store help you with a lot of the different sides.”

In one to four minutes the cooking videos offer viewers easy solutions for meal applications.

For instance, in one video Hanten gives a recipe for a glaze made with ketchup, brown sugar, Worcestershire sauce and mustard to bake on top of Festival's Mom's Meatloaf. For sides, she suggested green beans, and a cheesy hashbrown casserole available in the Festival deli made with Wisconsin cheese.

In a recipe with a few more steps, Hanten shows viewers how to use Festival's plain or pre-marinated Dad's Chicken Breasts to prepare chicken parmesan.

In addition to sending viewers to the meat, bakery and deli departments, Hanten told SN that she also promotes the salad bar as a place for shoppers to buy already-prepared recipe ingredients.

“If you just need a few mushrooms for a recipe or a little bit of blue cheese crumbled up, get it right from the salad bar.”

Hanten also encourages shoppers to think ahead with their meal preparations. She advocates cooking in bulk one day a week and using a slow cooker.

Since Hanten is a working mom living in Wisconsin, she's able to adjust recipes and make them appropriate to Festival's specific customer demographic.

“And even beyond Wisconsin, we wanted somebody that was ultra local that was right here that shopped our stores that knew our stores and would be able to very easily relate to people,” Director of Public Relations Nick Arlt said.

Arlt noted Festival was looking for someone who would understand “the Packer fandom” and “just what it's like to live in northeast Wisconsin” — the habits and the preferences, with the idea the understanding would carry then throughout the state where Festival has stores.

Hanten's focus on helping shoppers envision how different products and ingredients can come together as meals has also permeated the radio and television ads she does for Festival. The company does a lot of live radio advertising, and Hanten typically does a weekly segment for each station they're on, Arlt said.

“So she'll be having a conversation with the host of that show typically in the morning and just talk about, ‘Hey, you know, this is on sale this week. Here's a great idea that you can just quickly throw together. Do ‘this,’ ‘this’ and ‘this,’ and go to festfoods.com to get that recipe.’”

Hanten said she might give a slow cooker recipe for an on-sale pork roast instead of mentioning the price per pound. “So more quick, recipe-driven content … hopefully we get the people who're listening to the radio, get them hungry and get them into the store that way,” she said.

This partnership reinforces Festival's long-term focus on encouraging its customers to enjoy meals at home with their families. For the past seven years, Festival has been doing a push for shoppers to celebrate Family Day in September by eating together. The retailer uses the day to bring attention to the benefits of regular family dinners for children, such as the statistically decreased likelihood they will use drugs and alcohol. Last month, participating Family Day shoppers were eligible to win Festival gift certificates.

Arlt said Festival may expand the Cooking Mom partnership in the future. One idea is to produce videos focused on items that customers don't know how to prepare, such as seafood.