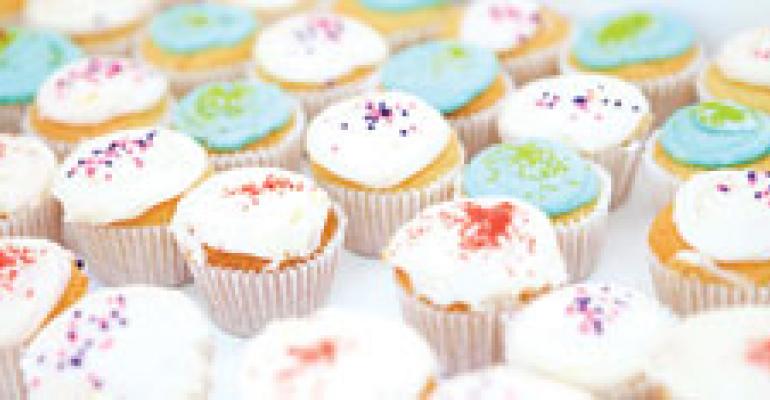 Cake sales have been mixed this past year, but some retailers are finding ways to put the category back on the rise despite a challenging environmen

It's tough to overestimate the importance of the cake category for in-store bakery departments. Not only do they account for almost 30% of most supermarket bakeries' sales, cakes are also a destination item that help draw traffic into the department when shoppers are celebrating birthdays, holidays and special events. They offer a canvas for department staff to showcase creative new ideas, and they offer a real opportunity for a bakery to set itself apart from local competitors.

The category held its own during a difficult year, with sales growing slightly, up to $2,795 per store, per week in the U.S. during the 52 weeks ending Sept. 25, according to Perishables Group FreshFacts data, powered by Nielsen. During the same period a year earlier, sales averaged $2,757 per store, per week. The Central, West and Southern regions of the U.S. all enjoyed slight gains, with sales in those areas averaging $2,917, $2,804 and $2,589, respectively, while dollar sales fell slightly in the East, from $3,201 to $3,173.

But, there's little doubt that maintaining sales or posting small gains has been a challenge during the past couple of years.

“We have a pretty good cake business,” said John Chickery, bakery director for Riesbeck's Markets, St. Clairsville, Ohio. “However, probably like a lot of retailers, cake sales have dropped off a little bit for us. Tonnage is about the same, but dollar sales are down because we've probably run a little bit hotter on pricing.”

Cakes are a key category for Riesbeck's, so Chickery worked to maintain market share during the recession partly by running aggressive specials. Cakes are regularly featured in store circulars, and as he noted, prices have been running hot.

Sales of smaller cakes and cupcakes have also been growing — a trend that seems to have taken hold at many retail bakeries during the past couple of years. Chickery said that quarter-sheet birthday cakes have continued to perform well, and full-sheet cakes are still doing well around holidays and events such as graduation day. But, some customers seem to be trading down to eighth-sheet cakes as well. Offering a variety of sizes in response to these trends has helped his bakeries maintain its business in the category during a challenging time.

“People are looking for smaller portions. Rather than buy the whole cake or a half cake, we seem to be doing a much better job with single servings or two servings in a container. Cupcake sales also seem to be up again, and that's going back to portion control.”

In the Eastern region, total cake category sales are down 0.8%, according to the Perishables Group, but like Riesbeck's, many bakeries are having more luck with cupcakes, which are up 6.2%, and individual desserts, which are up 10.1%.

Chickery has also continued to run promotions that draw the local community into his departments. For example, this past Halloween was the 13th year that the bakeries have run a special cake promotion featuring jack-o-lantern face cakes. The cakes are on sale for the last two weeks of October, and on weekends, children are invited to come decorate their own in a Riesbeck's store.

Sales have gone up steadily every year since the promotion began, Chickery said. In 2009, the company's 10 stores sold 2,088 of the cakes during the two-week event. This year, they sold 2,523. And, there's the added value of connecting with parents and kids by giving them an activity to do in the store together, he added.

“We've got tables set up; we've got people available to help these children decorate their own cakes. In 2009, for a two-hour window on a Saturday, we had 353 children come in. This year we had 433 children come in and decorate their own cake. … Anytime you can get the general public involved, it creates a little bit of excitement, a bit of a show. That's a good promotion for us. Each year it's gotten bigger and better, and people kind of get excited about it.”

Decorated cakes account for an average of one-third of category sales, according to the Perishables Group, and it's a good sign that every region was able to post small gains in this key subcategory. It grew 3.4% in the West, 3.5% in the East, 4.3% in the South and a whopping 32.4% in the Central states.

While Chickery's experience at Riesbeck's probably mirrors the experience that many high-volume in-store bakeries have had with the category this year, the story is much different at Kings Super Markets in Parsippany, N.J. Illustrating how much shopping habits can vary by market, sales of cupcakes and individual portions at Kings have been flat, while high-end cakes and cheesecakes have been growing rapidly.

“Our patisserie case cake sales are up 15.4% year to date,” Kenneth Downey Sr., the 24-unit chain's director of bakery sales and merchandising, told SN. “I think it's because the economy is lightening up a little bit, and people aren't so afraid to spend their money. I'm happy. The high-end cake sales are coming back.”

Two years ago, Downey said, Kings cake sales were wobbly, but he changed the variety and sizes and began to offer some upscale 3-inch cakes, which did well. Right now, however, those and individual portions are off slightly, he said, even as fancy, whole cakes are keeping the rings up.

In fact, just in the last couple of months, Downey brought in Balducci's branded cheesecakes, which have boosted the cheesecake category's sales by a full 50%.

In the cupcake category, which has remained flat, the best seller by far is a package of high-quality, red velvet miniature cupcakes. Just two bites per cupcake. Their cute size, their quality, and the fact that they're red velvet, which is red hot right now, puts them at the top of the cupcake best-seller list, Downey said.

Another positive sign for supermarket bakeries could be their growth in the wedding cake business in some regions. Wedding cakes represent a tiny 0.3% of total cake category sales in the supermarket channel, according to the Perishables Group. So, any sort of fluctuation in the category is coming from a very small sales base and should be taken with a grain of salt. But, supermarkets in the East enjoyed a 42.4% increase in wedding cake sales during the latest 52 weeks, while in-store bakeries in the West saw a 114.8% jump. This could mean that supermarkets in these regions have been expanding their catering programs, or possibly that in-store bakeries have had the opportunity to hire more experienced decorators during the recession.

Pudding and crème cakes also appear to be a solid growth trend. These cakes account for a more substantial 8.5% of the total category, and they enjoyed a great year everywhere but the East, according to Perishables Group data. In the South, the subcategory grew 25.2%; in the West, it was up 24.5%; and in-store bakeries in Central U.S. states enjoyed a 16.3% gain. By contrast, sales of pudding and crème cakes fell 18.8% in the East.
— Additional reporting by Roseanne Harper

The Fresh Market serves up fine dining for dinner
Aug 21, 2020