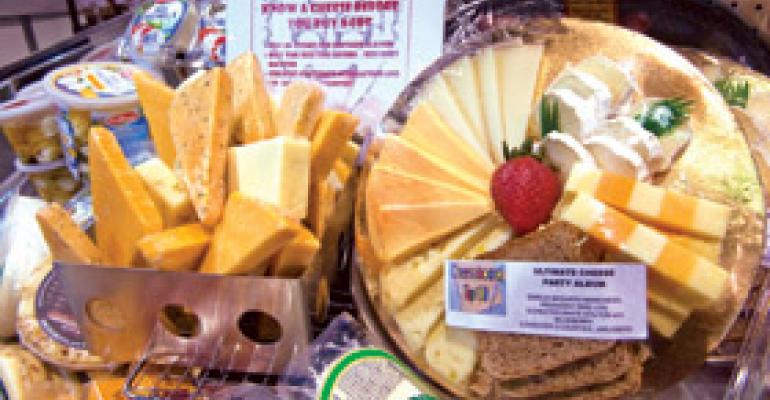 Elvis? Lady Gaga? They're only warm-up acts to the headline stars at this year's IDDBA Show & Sell Center

Mac 'n cheese heaped in spinning bowls fashioned from old records, pretzels performing The Twist with sweet and savory add-ons and a giant guitar cake enrobed in colorful fondant headlined the main act at this year's Show & Sell Center during the International Dairy-Deli-Bakery Association's annual seminar and expo, where the theme was “Rock Star Food.”

The retailers and manufacturers who worked for months to stage this annual extravaganza of creative merchandising did not disappoint their legions of fans.

This year, the various stations played off the music theme with names like Griller, a nod to pop icon Michael Jackson's legendary “Thriller” album, and Buy Buy This American Pie, a retail interpretation of the 1971 Don McLean classic.

But behind the wit lies a serious goal: To provide retailers with merchandising inspiration and ideas that can be implemented in some form or fashion back at their own stores.

“Last year I took pictures and I also brought back the [IDDBA] photo disk to our merchandisers,” Gyerman said, referring to the photo-filled CD the trade group provides attendees. “That was a great tool for everyone to get ideas from.”

The departmental mock-ups covered all aspects of the dairy-deli-bakery experience, including meals, cheese, cakes, sandwiches and single-serve items. One thought-provoking walk-around case called Rock the Block featured a dozen cold containers filled with a variety of pre-cut fresh vegetables. The idea, organizers said, was to provide shoppers with a medley of snow pea pods, broccoli, tri-color peppers, and white and orange cauliflower florets to cook at home.

“This gives the consumer a buy-in to convenience,” said Chris Koch, the executive director of Cooking or Whatever, a Langhorne, Pa.-based culinary teaching and consulting firm. “They can be sold by the each, at whatever amount the shopper wants. It's minimal labor that brings in a big return to the retailer.”

The mix-and-match veggies were part of a larger display designed for convenient fresh meals. Other sections of the walk-around included various-sized proteins like whole and part rotisserie chickens in to-go bags, chicken nuggets in clam shells and individual servings of tiramisu.

One of the signature deli/meals cases belonged to Elvis under a sign proclaiming Golden Oldies. Surrounding a swivel-hipped action figure of the King were classics like pot pie and related comfort foods. There were twists on the theme as well, with sliders made of chicken, boneless ribs, meatloaf and even sausage and egg.

A line-up of nine “towers” — clear food-grade plastic tubes filled with the likes of grilled vegetables and grains, or a spiral ham dinner — caught the attention of many visitors. Like the other towers, the one made of chicken parmesan could easily serve as a one-dish meal, in this case composed of two stacked, breaded chicken patties supporting a portion of spaghetti, and all topped with red sauce.

Some retailers looked beyond the food to the various ways each item was presented. Allyson Tressel, store supplies procurement manager at Nash Finch Co., Minneapolis, said updated, creative and functional packaging is always a priority for the grocery wholesaler.

“We've been looking more at what to put the food in, and how customers might be able to take these products home,” she said as she and a colleague toured the displays.

Some foods needed only themselves to stand out, and that is what retailers found in the Center Stage case, where various baked potatoes and mac 'n cheese skillets used the names of bands to describe their components. Of the 18 stuffed, baked potatoes, favorites included the Grateful Shred, where the twice-baked toppings were dyed in psychedelic colors and piped back into the potato skin. The Heavy Metal potato was topped, literally, with nuts and bolts.

The mac 'n cheese creations creatively matched bands named after cities to a particular cheese. For example, the Kansas skillet was made with Sonoma Jack Habanero cheese, while the Alabama used Purple Moon Cabernet-Soaked Cheddar.

Nearby, a large case filed with meal components was in tune with the times under the banner of Pick Me. The display was divided between main course items, sides and desserts, each of which was assigned a numbered, guitar pick-shaped tag. Consumers would use the colored icon and number system to “pick” an entree, a side and a dessert.

“The idea was to give people a quick and easy way to assemble a meal for themselves or a family — an entree, a side and a dessert that could be put in one bag for one price,” said Isabel Fischer, bakery-deli manager for Coburn's, St. Cloud, Minn.

Those who examined the case liked the use of numbers to promote convenience. The pick icons easily divided the entrees (sub sandwiches and wraps), the sides (green salads and soups) and desserts (cupcakes, brie with fruit).

Many also thought that setting everything in a service case would be ideal for promoting customization and portion control.

“You can find a lot of new ways to merchandise products, and you see how something as simple as a garnish can make the foods look more appealing,” said Fischer of the overall display.

Dairy got its turn in the spotlight at the Cheeseboard 100 station. Here, creative touches were found in medallions of goat cheese overwrapped on a gold tray; a bucket filled with trial-size wedges of various cheeses, topped with a sign reading Tastes; and the Potato Chart Topper, a multi-well party tray filled with all sorts of fixings for baked potatoes.

“This just caught my eye,” said Heinen's Gyerman of the sour cream-shredded cheese-butter-bacon crumble-chive combo. “We don't have anything like it. It could be a holiday item when you're moving a lot of party tray-type things.”

Likewise, bakery was a hot topic with several large displays devoted to the latest trends in the ISB. Standouts in the Buy Buy This American Pie case included miniature pies baked right into mason jars for customers to take home, and natural-cut pie “fries.” Next to that, the Sweet Dreams Are Made of This case featured always-popular moon pies, with four sizes ready to satisfy a single person or a family.

All the ISB products at this year's event — from the moon pies to the trays of over-the-top decorated doughnuts — were designed to be simple, yet appealing, retailers said.

“You could use any existing frozen products. Fill them, dip them, decorate them — and done,” said Jennifer Dahm, a bakery manager at Dorothy Lane Market, Dayton, Ohio.

“And the doughnuts?” she continued, pointing to a self-serve case behind her. “How great are those? Froot Loops on a doughnut. It's a simple value-add, and you make the bakery and grocery buyers happy.”

“Shoppers buy with their eyes,” said Lane, a finalist in IDDBA's 2007 Cake Decorating Contest. “That's what I tell decorators. If it doesn't look good, they're not going to touch it.”

Sure enough, a walk-around service island of four cases dazzled the eyes. It was at the Cakes in Concert case that visitors found the classic fondant-covered guitar cake, as well as Sunny & Share, a sun-shaped cake and Hip 2 Be Square, where all the items shared the same square shape, including skewered brownie cubes and single-serve parfaits of cake, fruit and cream.

Like any other year, the Show & Sell Center is full of creative ideas, but how many actually get taken back to stores and are implemented in one form or another?

“In my opinion? This year?” asked Dahm, looking around at the various stations. “They're all very doable. We focused on that a lot.”

One idea from a show several years ago is still used at Coburn's today.

“We've implemented some of the sandwich programs we've seen here, including the wedge,” said Fischer, referring to an oversize round sandwich that is cut into pie-shaped sandwiches prior being merchandised in the deli case.