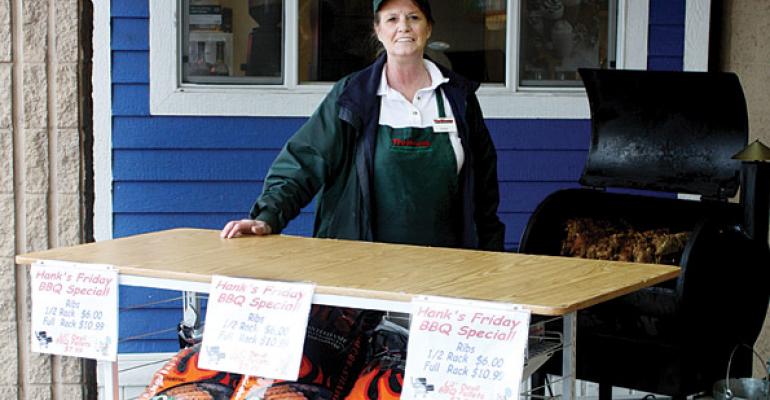 HILLSBORO, Ore. — Hank’s Thriftway has emerged from the recession with perishables sales that are climbing — slowly, but climbing.

Armed with confidence and ideas that work, Hank’s owners pitted the store’s perishables and customer service against intense competition and a dark economy, and won.

“All our perishables departments’ sales are up or equal to last year’s,” Tom Evans, president and co-owner of Hank’s, told SN. 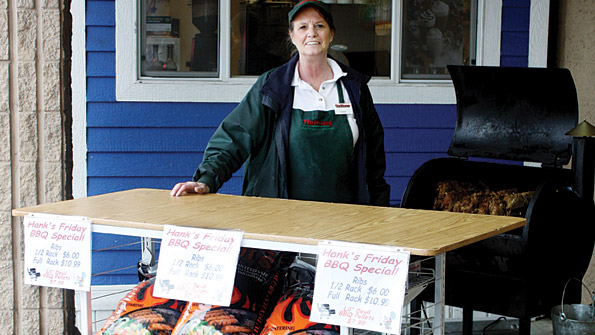 Hank’s has held steady even with giants in its backyard. Two 80,000-square-foot WinCos, a Wal-Mart supercenter, three Fred Meyers, two Albertsons, a Safeway, the world’s largest Costco store, and a Target that has just added grocery, are all situated within a five-mile radius of Hank’s. Add to that specialty stores and a New Seasons store that has just opened.

Evans is quick to attribute his store’s staying power to a combo of top-quality perishables and excellent customer service.

As luck would have it, Evans and co-owner Larry Hering renovated the store just shortly before the economy’s plunge.

“In 2006, we doubled the size of our produce department by taking out one and a half grocery aisles, and we doubled seating in our deli from about 15 seats to 30,” Evans said. “Right away our deli lunch sales went up 25% to 30%. We bought all new tables and chairs. In all, we spent about half a million dollars on the renovation, taking down the grocery aisles and prettying up the deli and meat departments.”

But location does count. Hank’s is situated directly across the street from a large hospital and just blocks from county offices. Hank’s draws many of its lunch customers from those places.

Then, last spring, urged by their wholesaler, Unified Grocers, Hank’s owners added a grilled ribs program that has been a hot item even though the winter. Right now, in January, on Friday nights, the assistant deli manager and part of the deli crew grill racks of ribs in front of the store.

“Those sales stay amazing. We’ve doubled our Friday night deli business with that program,” Evans said. “Just a couple of weeks ago when the temperature was at 18 degrees, we had the best sales we’ve had since October. It almost equaled a summer evening.”

Evans explained that while the grilling is done outdoors, the ribs are brought into the store and piled in the hot case. There, customers see close by a huge array of salads, more than half of which are store-made.

Evans sees Friday night ribs as a huge convenience for customers, who can count on them every week.

“They’re good, and they’re inexpensive, too. We get $10.99 for a rack and $6 for a half rack,” Evans said. “It’s an easy program. We get them from Unified already cooked [frozen in vac packs]. So we just slack them out, throw them on the grill, with a good barbecue sauce, and that’s it. We’ve added no labor and have gained $2,000.”

The grill will also be fired up for ribs on Super Bowl Sunday this year.

Another deli program that customers count on is one that involves store-cooked chicken. Every Wednesday, they know they can get an eight-piece box of fried or baked chicken for $5.99.

“We started that out matching Safeway’s price for eight pieces at $5, but last year we raised it to $5.99 and we saw no effect on sales,” Evans said. “Right now, we’re looking to add a 10-piece box of dark meat pieces. We’ll keep the same retail on that, $5.99, and we’ll make more money than on the eight pieces.”

Next up in deli will be a program that’ll feature a store-cooked meal for grab and go. The key will be the menu. Customers will know what the entree and sides are on Monday, for instance, and on every other day of the week.

The deli’s lunch and breakfast menu items, by contrast, are informal.

“We do a nice breakfast business every day of the week, but it’s simple. A sandwich similar to a McMuffin and breakfast burritos are popular.”

Then, for lunch it’s mostly hot sandwiches and salads.

When Evans is ready to put in a special section for the grab-and-go dinner menu items, he’ll make room by rearranging beverage coolers, he said.

That program’s launch is set for the first week in March.

While Hank’s does do some catering, it’s not a big deal, except for when someone wants something special done. Like at Christmastime when the county had a dinner and asked Hank’s to roast turkeys for it. “We prepared 12 or 14 big turkeys for them. We had to roast them in the bakery oven because it was the only one big enough,” Evans said.

Certainly, being attentive to what deli customers want to eat — and how and when they want it — has served Hank’s Thriftway well. Top-quality produce has been a draw as well but recently the meat department gets kudos for drawing customers in.

“We changed over to USDA Choice last summer, and I’m telling you that beef is just great. Customers love it,” Evans said.

“Our tonnage is still down somewhat, but our dollar sales in meat went up right away by 5% to 6%.” Weekly ads call out USDA Choice selections and banners and shelf-talkers tout USDA Choice.

“Prime ribs were big for Christmas. We sold them sometimes at $100 a pop. Because of the way Christmas fell, we ran a special for two weeks from Dec. 14th through the 27th, at $7.99 a pound.”

Evans cited Hank’s bakery, too, as a factor that has helped Hank’s thrive.

“We’re the only scratch bakery in town and we do a good business with that. There’s a particular German pastry that I’d say is our signature product and we make our own doughnuts, too, from scratch. They may be the best sellers.”

The company takes pride in its wedding cakes as well. “We just came back from a bridal show in Portland.  We have a booth there and we always pick up orders for 60 to 80 wedding cakes right there.” Hank’s employs four full-time bakers and the bakery opens at 6 in the morning, an hour before the store opens. Hank’s Perfection Bakery, as it’s called, has a separate entrance and does a big business in doughnut and maple bars early in the morning.

But what kept Hank’s standing during the recession when nobody was spending as much money and even Hank’s sales were trending down?

“We’re a union store, too, so we’re not on a level playing field with Wal-Mart and some other competition around us, but we found ways to cut expenses, especially in the inventory we kept,” Evans said.

“We took a hard look at supplies. For example, we found that the meat department was keeping three cases of meat trays in the back all the time, even though they only went through one a week,” he added.

“We started telling the department how much they could spend on supplies and that would have to do. In that way, we quickly brought the backroom inventory down from $10,000 to $4,000. That’s just one quick example, but it shows you how we saved $6,000 in a short time.”

In addition to the quality of its perishables and its innovative programs, a high level of customer service has been a valuable differentiator for Hank’s.

“I can’t leave out the fact that I think we have the best checkers in the world,” Evans said.

“We have no conveyor belts. When a customer comes up to the register, the checkers unload his cart and begin to ring up the items. Some of those clerks have been with us 15-plus years.”

Turnover is not big at Hank’s. Many associates have been with the company for years. Bakery manager Patty Smith, for example, is entering her 20th year at Hank’s. And Evans attributes that to the fact that he and Hering treat their associates well.

“Our employees like it here. I have never had a union problem. That’s because of the way we treat our people.”