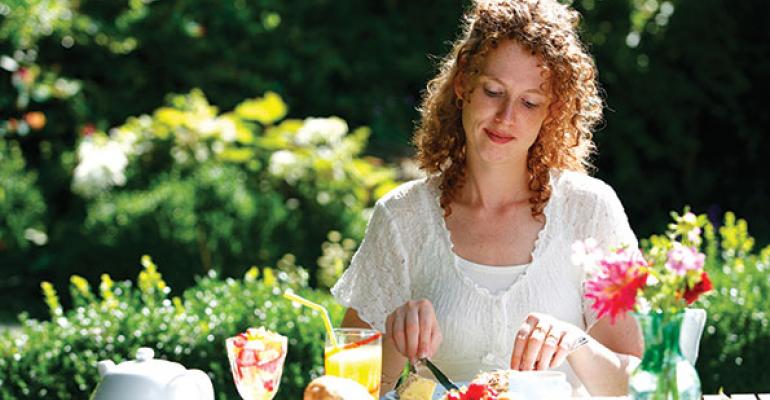 The New Consumer: Are eating trends age-based or generationally influenced?

This is part of a&nbsp;series of IdeaXchanges and other SN articles describing the Millennial Revolution&#39;s impact on the food distribution industry.&nbsp; SN&#39;s&nbsp;The New Consumer conference in September will focus on attracting and retaining Milliennial shoppers

Sophisticated meal solutions with fresh, pre-measured ingredients and recipe cards that are conveniently merchandised and sold at a desirable price point are among the ways that retailers can win with Millennials, says Diane Tielbur, president of The NPD Group’s research food and beverage consumption practice.

The recommendation is based on the Port Washington, N.Y.-based consumer researcher’s Generational Study: The Evolution of Eating, which forecasts how generationally influenced eating preferences can inform Millennial-targeted merchandising strategies over the next five years. As part of its study, NPD set out to determine whether certain habits are age-based, and therefore subject to change, or generationally influenced, and thus longer lasting.

The NPD Group is uniquely qualified to perform such an analysis, since according to Tielbur, for the past 30 years it’s collected age-related data, including what a participant ate and drank during a seven-day period. Participants also provide information about who they ate with, what their children ate and whether they deemed the occasion a meal or snack, Tielbur explained.

For its latest study, researchers first determined which foods all generations are consuming more of, and of which foods they are eating less.

NPD detected a divergence in the way that Millennials are consuming fresh foods vs. how Baby Boomers are approaching them, and determined that these behaviors are generationally based, Tielbur said.

“This is important because Boomers had always been the ones that had the highest consumption of fresh foods, but they’re decreasing, and actually look to restaurants and more convenient foods than people their age and generation had [in the past],” Tielbur said. “So we’re confirming a reality and quantifying that reality but we’re also breaking a myth because the Boomers aren’t going in that same direction [as Millennials]; they’re going in a different direction.” 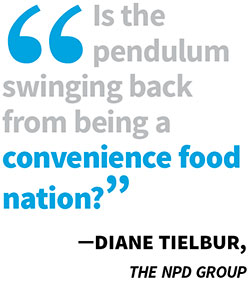 The trend is also borne out in the attitudes expressed by members of both ends of the age spectrum, with younger generations most likely to associate “clean eating” with an improved quality of life. More than half of 18-24-year-olds (55%) reported that clean eating improves the overall quality of life “very much,” compared with 42% of 25-34-year-olds, 36% of 35-53-year-olds, and 26% of Americans 55 and older.

Meal preparation is another area of distinction for Millennials, NPD Group finds.

“And that’s not just at dinner, that’s carrying through to breakfast and lunch,” said Tielbur. “Even though they’re busy and they’re working and have kids and very frenetic lives, they have actually decided to have more involvement and interaction in [preparing] their meals.”

The trend is driven, in part, by Hispanic Millennials since Hispanics in general tend to do more stovetop cooking, and 65% of Hispanics are under age 35. 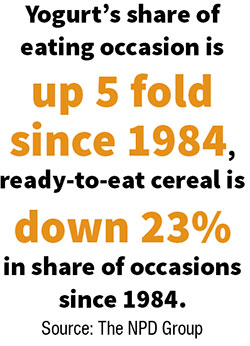 Millennial eating behaviors have also been adopted by members of Gen Z (born in 1997 or later), who according to the NPD Group, are eating 50% more fresh fruit and drinking 50% fewer carbonated soft drinks than Americans who were the same age in 1984.

Traditional kid-friendly fare such as hot dogs and macaroni and cheese are still found in Millennial-led households with children; however, consumption of these foods is on the decline, according to Susan Schwallie, executive director of The NPD Group’s client development team.

“There are some things that when you have kids you kind of want around, and are feeding to them but you’re not seeing them around to the same degree as you did with prior generations,” she told SN. Instead, children are eating more vegetables, fruits and yogurts, than did members of previous generations when they were their age.

Some families are also forgoing shelf stable options such as fruit drinks, and juicing fresh fruits and vegetables themselves. Fruit drink consumption has been on the decline over the past 10 years, according to NPD Group, while sales of juicers have doubled in the past 5 years. Trends like these should inform future merchandising strategies, according to Tielbur.

“The involved food preparation is across breakfast, lunch and dinner, which lends credibility to the importance of this behavior to Millennials,” she said. “It will be interesting to see how this plays out going forward. Is the pendulum swinging back from being a convenience food nation?”