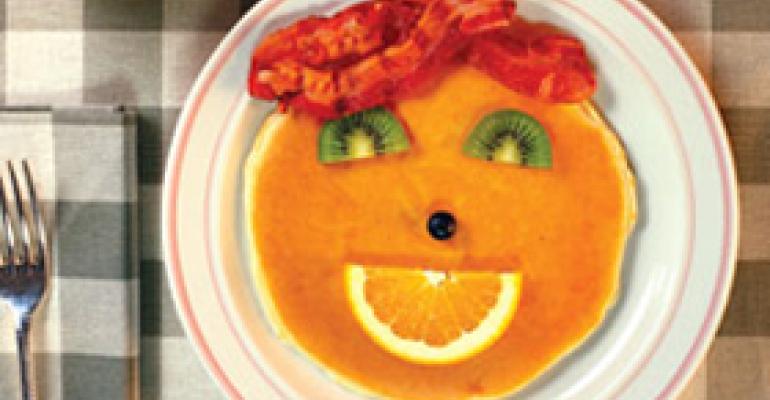 Prepared food departments puzzling over ways to build their breakfast business might take comfort in the fact that they are not alone. Restaurant owners face a similar set of challenges during the morning daypart. Basically, diners want different types of experiences during different times of the week. During the week, consumers are looking for convenience, price and speed of service, said Darren

Prepared food departments puzzling over ways to build their breakfast business might take comfort in the fact that they are not alone. Restaurant owners face a similar set of challenges during the morning daypart. Basically, diners want different types of experiences during different times of the week.

“During the week, consumers are looking for convenience, price and speed of service,” said Darren Tristano, executive vice president for Technomic, a Chicago-based foodservice consultancy. “During the weekend, they're really looking more for the occasion where they can sit down and relax. They're willing to spend more, and they're looking for better quality, better taste and a more full-service experience.”

Also, when they're in a hurry during the workweek, many consumers either skip breakfast or eat it at home, Tristano added, noting that drawing more breakfast traffic has proven a challenge even for many prominent QSR chains, including Wendy's and Taco Bell.

“With regard to who has been very successful lately, McDonald's has done a terrific job of raising their volume with growth during the breakfast daypart,” he said.

“However, it's a very low-margin part of the day. The price points are $3 to $4. Most operators are not going to make a lot of money, so they've got to be careful in terms of what they're offering.”

Yet, according to recent data, there may be some limited opportunities for supermarkets to build their breakfast business.

Dinner meals posted 5% growth during the year ending in August 2008, and now account for 17% of retail prepared food's $13 billion in annual sales, according to the NPD Group's “Retail Meal Solutions” report. Lunch remained the segment's strongest traditional daypart, with 27% of sales — unchanged during the study's time frame. Breakfast represented 21% of sales, up 1% from the prior year. The remaining 35% of prepared food sales occur during a daypart that NPD defines as the “PM Snack” period.

Lacking the convenience of a drive-through, supermarket prepared food departments interested in boosting breakfast sales will need to find other ways to make their program a morning destination. Retailers might consider focusing on a niche or a specialty that sets their program apart from their customers' other morning meal options.

The hot breakfast bars at PCC Natural Markets, for example, feature fresh prepared foods made from ingredients that comply with the natural food retailer's local and organic sourcing standards.

“Our produce is almost exclusively organic, and our eggs are all local and free-range,” noted Leon Bloom, prepared food specialist for the Seattle-based chain of co-ops.

“I think a lot of places do lip service to organics and sustainable agriculture, but when it comes to buying decisions, a lot of times [prepared food departments] will choose to save money by going with non-organic produce.”

He continued: “Because we value sustainability and sustainable agriculture, we're committed to supporting it, and our members can trust that we'll be using the best and the cleanest product that we can possibly get, even if there's a lower-cost alternative available. And, we don't raise our [retail] prices because of that.”

Prepared foods have quickly become a top-performing category for the chain, ever since the hot food bars were first tested in a single PCC location in 2007, Bloom told SN. Lunch and dinner business is still stronger than breakfast, but a.m. selections — including a variety of frittatas, breakfast sausages, cheesy grits, corn pudding, bread pudding, scrambled tofu, and scrambled eggs with cheese and veggies — provide a steady draw during the morning daypart.

“Someone can drive up to a store, get a hot breakfast and spend less money and even less time here than they would getting fast food. And, they'd be getting foods that were organic and free of chemical additives,” Bloom said.

The restaurants, which also serve sandwiches and entrees for lunch and dinner, have a very loyal customer base, with many diners eating there up to three times per week, according to Gary Stadden, director of foodservice operations for the Wooster, Ohio-based retailer.

“We feel like it's a relationship where we both benefit,” Stadden told SN. “The restaurants benefit from the store traffic, but when we've done surveys, asking customers leaving the restaurant whether they plan to do any shopping, it's about 50-50.”

But, for most prepared food departments, the dual challenges of a good breakfast program are daunting — they need a concept that will draw customers into a parking lot and out of their cars on weekday mornings, and/or encourage them to linger over a newspaper or a quiet conversation on weekends.

“You're going to streamline your costs,” he said. “Obviously, the rents are going to be low, because they're not taking up a lot of space, there's not a lot of build-out, and there really isn't a lot to put in for a concept like [a coffee kiosk or smoothie stand]. If that's the case, you've got relatively low costs, and you don't need to generate a lot of sales to be successful.”

Although Tristano noted that Starbucks had recently begun dissolving arrangements with some of its supermarket partners, he said that coffee remains one of the single biggest draws for shoppers during the morning. Shoppers will seek out their preferred coffee in the morning, and will often buy something to eat with it.

As for encouraging diners to consider their local supermarket as a possible place to relax for brunch, Tristano said the focus should be on comfort and atmosphere.

“You have to have a seating area if you're serious about selling restaurant-quality food within a supermarket. But, it has to be attractive and inviting. It can't just be cheap formica tables and a couple of chairs. Something that's much more comfortable and inviting to their shoppers, where they can say to themselves, ‘Wow, I'd prefer to sit here and have a meal, instead of trying to go eat this in my car.’”