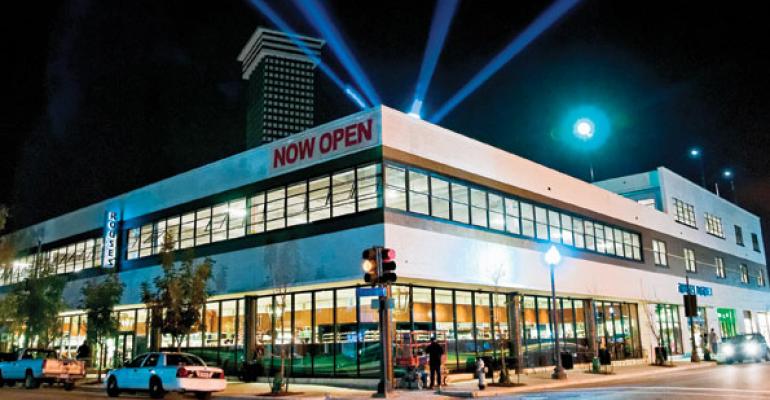 Rouses&rsquo; arrival in New Orleans&rsquo; central business district has helped tune up and cheer up an area that needed it

Chef-jacketed associates at this store often actually escort customers to what they want, which is usually ready-to-eat or ready-to-heat, store-made food.

Probably because Rouses Markets is the first full-service grocery store that New Orleans’ central business district has had in nearly 50 years, customers keep telling store-level employees they’re grateful, even excited, that Rouses’ newest store was opened right in their midst.

The food, the look, the convenience, the friendly ambiance combined have given this, the 38-unit chain’s latest venture, a jump start. Opened just before the winter holidays, the store has seen a constant increase in traffic, officials said.

“We’re definitely in a growth mode,” Louis “Jack” Treuting, Rouses’ executive director of culinary operations, told SN. “I’ve just ordered eight more wood stone ovens. Prepared food sales are even better than we had expected they would be by this time.” 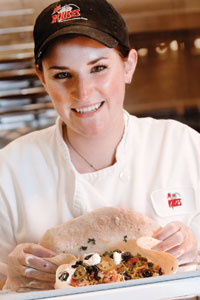 Such sales success has spurred the addition of new concepts. A taco bar (left) was added just last month, and more concepts are being researched.

“We were having such success with our fresh burritos, we decided to do tacos. All the ingredients are provided on the bar. You build your own. We even have paper bags there [for the customers’ convenience],” Treuting said. Two large tacos for $4.99 make for an inexpensive and easy lunch.

The huge selection of freshly prepared foods — including several ethnic stations as well as traditional Louisiana cooking — serves this particular area well. The district, only relatively recently showing significant signs of renewal in the aftermath of Hurricane Katrina, is heavy on office buildings and apartment buildings. That means a busy lunchtime and also a more-than-usual request by customers for single servings or small portions.

An upscale, touch-of-class store like this one, with so much tempting food wafting its aromas into the air, is like a light in the dark, local residents say. Both residents and people working in the area have reacted with enthusiasm, and sometimes with barely checked emotion.

Chaya Conrad, Rouses’ in-store bakery director, told SN one of her friends was stopped in her tracks when she visited the store for the first time.

“She said it brought tears to her eyes to see such a beautiful store because it meant New Orleans was coming back,” Conrad said.

'I Love This Store'

And blogger reviewers are saying such things as “Finally!” and “I love this store, everything about it.”

This particular area of downtown had been devastated for a long time after Katrina swept through. Now, people in the neighborhood are happy to shop here, or just stop by and even stay for a while. There’s always something going on, officials told SN. Activity at the store begins early in the morning.

“People line up by 7 o’clock for doughnuts and pastries and coffee,” Conrad said about morning commuters.

“We went back to frying our own doughnuts at this store, but these are really high-end doughnuts. Creme brulee, pecan with bacon and cane syrup. People love those,” Conrad said. 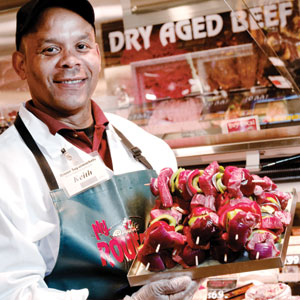 While traffic starts at about 7 a.m., the baking and doughnut-frying crews come in hours earlier to have things ready for the first customers.

“We try to use local ingredients as much as we can. For instance, local pecans, and we use our local muscadine grape jelly in our jelly doughnuts,” Conrad said.

The bakery does good business with its store-made gourmet cupcakes, and custom-made cakes, too, but some items are sourced from outside.

Not just any items. They’re from locally revered, upscale bakeries. French macaroons, for instance, and hand-made marshmallows, and some Vietnamese specialties such as milk breads and cookies.

“Believe it or not, we bring in 12-ounce fruit cakes that sell year-round,” Conrad said. King cake is another year-round seller.

“We sell more of them [king cakes] than all the other bakeries put together in Louisiana,” Conrad said.

Since so much of the customer base at this downtown store is comprised of singles or couples, the bakery is big on single-serve packaging.

“We even sell single slices of cake from the showcase.” Indeed, associates will slice a cake or cut a pie that’s in the display case and sell one slice if that’s what the customer wants.

By lunchtime, the store is crowded, certainly in the fresh departments, and that’s a large part of the store. Treuting estimates that perishables make up 50% of the selling space at this store.

“We have a large presence with fresh seafood, specialty cheese, meat and specialty meat. We make our own sausage. And we’ll be smoking whole pigs and Boston butts.”

This store is perfect for lunch, but building dinnertime traffic is in the plans.

“We have a good flow of traffic throughout the day, but lunchtime is busiest right now,” Treuting said.

He considers seating very important. Here, there is seating for 40 inside and for about 50 outside.

“Whenever you have store-prepared food on the scale we have, adequate seating is a necessity, especially in an area like this.”

Treuting referred to workers taking a lunch break or snack break. Workers may want to get away from the office for a while, at least long enough to eat. Or maybe they don’t have the opportunity to eat in their office.

“Where we don’t have seating in a store, we’re adding it, and where we do have it, we’re doubling it in most cases,” he said.

Treuting offered a rundown on what’s most popular at lunchtime. Pizza is big and so are panini, but ethnic bars are becoming more and more popular.

“We have a Vietnamese pho noodle station, and great pulled pork with an Acadian twist — with Cajun seasonings. And we have a huge hot bar that has a lot of Indian food.”

Sampling and demos have been ramped up at this location.

“Often we bring the back of the store to the front. For example, we might bring out a huge block of pecorino or cheddar and cut it up front,” Treuting said.

Such attention-getting demos are scheduled at least every two weeks, but five chef’s stations on the floor feature chefs or culinary-trained associates cooking every day.

“In addition to that, we’ve asked each department to do something, sample or demo something, every shift, every day,” Treuting said.

“We’re trying to raise the bar. We want activity going on all the time, and associates out on the floor to help people. From 11 to 2 p.m., we have a chef available, walking the floor, talking to people. In fact, at lunchtime, we have several culinary-trained people in chef’s jackets on the floor, ready to help. We conducted intensive training in customer service.”

There’s a lot of experimenting going on with ethnic food. Thai is in grab-and-go case right now, but could become a hot item.

Always during the season, Rouses here, as well as at its other stores, boils shrimp and crawfish, and shucks oysters. “I boil more crawfish than anyone around,” Treuting said.

It’s Treuting’s opinion that the Food Channel Network has done wonders for the sale of prepared foods, especially new things a customer may not have tried before.

“Customers are going to grocery stores more than they are to restaurants and they’re willing to try just about anything.” That’s why demos and sampling are so important, he said, pointing out that people are getting more adventurous.

“And we want to create that opportunity for them.”

Treuting, a graduate of Johnson Wales, knows a lot of chefs, he said, and that has helped him recruit some of them for Rouses.

The chain has been having New Orleans’ renowned chefs shopping its stores for ingredient for years. So it was not a big task to recruit chefs and sous chefs for the store here, Treuting said.

Until this store opened last fall, the Thibadoux, La.-based, family-owned chain’s presence in New Orleans was epitomized by a small store in the French Quarter that Rouses bought when A&P was selling stores in its southern division in 2007.

But this store, which is called one of a kind, on Baronne Street, just six blocks from the convention center, is the store to see, Treuting said.

“This is without a doubt our flagship store, at least until we do a really major remodel on one of our other stores.”

Schnuck Markets rolls out shelf-scanning robots to over half of store base
Sep 30, 2020