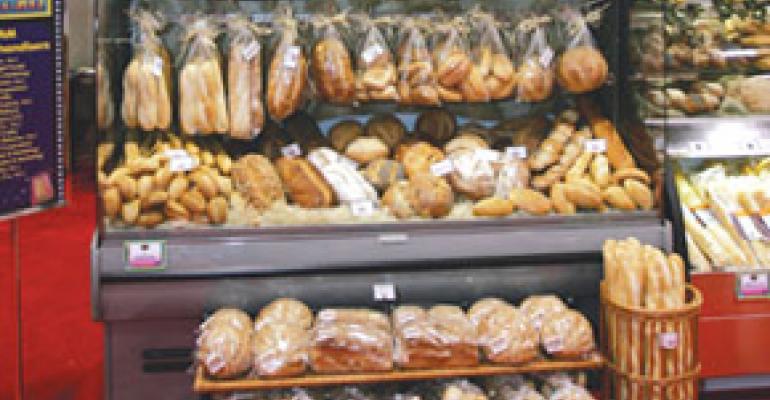 Reduce. Reuse. Recycle. Savvy supermarkets are doing all three by finding resourceful ways to keep stores filled with functional fixtures and refrigerated cases without going over budget. Strategies run the gamut from replacing older models with new energy-saving units to reusing nonworking cases for other purposes, such as displaying artisan bread. Many retailers rely on vendors to foot the bill

Strategies run the gamut from replacing older models with new energy-saving units to reusing nonworking cases for other purposes, such as displaying artisan bread.

Many retailers rely on vendors to foot the bill for new equipment. And some are opting to recycle — a less expensive, more environmentally friendly way to dispose of broken-down or out-of-date equipment.

Orchard Market, a two-store independent based in Spring Lake, Mich., frequently reuses shelving fixtures and cases that have been supplied by manufacturers.

“Tombstone recently gave us a freezer case with their pizza logo all over it and asked that we use it to stock their pizza for a while, in exchange for keeping the case,” Grant Berry, meat manager, told SN. “After carrying their products for the allotted time, we attached white paper to the outside to cover the logos and used it for other frozens. Later this month we'll be repurposing a 7-Up display as a bread stand.”

The 7-Up display currently consists of multiple levels of oval-shaped shelves, a topper with plug-in Christmas lights and an array of 7-Up logos on each side. Orchard Market agreed to sell the company's soda from the display during the holiday season. But soon, the logos will be removed and the topper taken off, rendering the unit ready to bear baked goods.

According to Berry, the retailer has reused a number of fixtures this way.

“We have a unit in the back room right now with M&M's and Snickers icons all over it that we use for ice cream bars during the summer,” he said. “We wouldn't reuse that for anything else, though, because it is designed to hold small products. And it just wouldn't look right to our shoppers. In this business, eye appeal is so important.”

Orchard Market frequently reuses non-refrigerated shelves and table displays for things like buns, pitas and bread. In the meat department, such fixtures are fitting for condiments, spices and cooking utensils. Old shipping crates are often stacked atop one another in produce and filled with fruits and veggies. The inexpensive option is easy to come by, and the crates give the department a rustic, farmer's market feel, said Berry.

“There's always been a dance between the supplier and retailer,” he said. “The retailer wants any branding on a fixture to be detachable, but the supplier is paying for it, so they want their logos to remain there.”

Ultimately, it's up to the retailer to find ways to reuse equipment if they want something for free, he added.

Hertel has seen supermarkets stocking cases with the “donor” manufacturer's products as well as those made by competitors — of course, only after any contractual agreements have lapsed. Most shoppers won't notice that Ball Park franks are now sharing space in a coffin covered with Oscar Mayer decals, or that a case with a big Tyson logo on it wasn't meant for store-packaged poultry. Private-label products would also be perfect for positioning against the vendor's products in their fixtures, he noted.

“Amid current economic conditions, retailers are clearly cutting back on capital expenditures, but they need to be very careful about ‘recycling’ cases in ways that the shopper can see,” Taft told SN. “The shopper doesn't like food or the displays containing food to be anything less than pristine.”

Hertel believes that few supermarkets will be buying new fixtures in 2009. Most are holding off on capital expenditures — even when it comes to refrigerated departments, which are typically the most productive in the store.

“These perimeter departments tend to be space-constrained, but products that stay in distribution have high turns — roughly 80% of dairy items make money, compared to about 50% of grocery items,” he said.

“Packaged meats are lucrative, too. As a result, what's most likely to happen with old fixtures is that they will be pressed into service for yet another year, as opposed to being repurposed. Budget is the bottom line for now.”

Hertel noted that while the economy is struggling, it has not hit rock bottom. So, most retailers will likely make do with what they have until the economy rebounds.

“We have maintenance guys on hand to fix anything that isn't working properly,” he said. “It costs a lot less to repair fixtures than to buy more, especially refrigerated cases, which are very expensive to buy brand new.”

Another driving factor at Highland Park is space limitations. Refrigerated units used in the deli, bakery and meat departments are so large that there is hardly enough room for them as is. Placing them elsewhere in the store just isn't an option, said Cummiskey.

Highland Park does reuse some fixtures throughout its stores — mainly smaller, more mobile tables and shelves.

“Oftentimes, for store remodels, mechanically sound equipment has been given a cosmetic face-lift either through new panels, shelves or exterior repainting,” he explained. “This is most typical when the equipment remains in place.”

Nonworking equipment, however, is rarely repurposed, he added. This is because exposing customers to nonworking refrigeration equipment can make a strongly negative statement about freshness. The use of secondhand fixtures often promises something much less than a first-rate shopping experience.

“For the vast majority of customers, their very first concern as it applies to refrigeration equipment and the products it contains is the level of freshness and food safety that they can expect for their family,” he said.

“Supermarkets reusing refrigerated cases will want to use caution to ensure that refrigerants are being safely handled,” said Latisha Petteway, EPA spokeswoman.

As long as a retailer is acting within the EPA guidelines, recycling and reusing materials can be a great way to save money and help the environment at the same time, said Petteway.

Materials reuse also helps to conserve resources and reduce pollution. This is because less energy is needed to reuse materials than to use virgin materials for a similar purpose, added Petteway.

For those who need to purchase new refrigerated cases, there are energy-saving models on the market that not only save the retailer on utility bills, but also help reduce energy waste. Petteway recommends any unit with an Energy Star label.

According to the EnergyStar.gov website, Energy Star-labeled commercial solid-door refrigerators and freezers are designed with components such as ECM evaporator and condenser fan motors, hot-gas anti-sweat heaters or high-efficiency compressors. Compared to standard models, these can save as much as 35% and provide a 1.3-year payback. By buying commercial solid-door refrigerators and freezers, purchasers can expect to save $170 annually per refrigerator and $120 per freezer.

Supermarkets should promote their use of such “green” equipment, said Wisner.

“Though more often environmental and energy-utilization initiatives apply to lighting, there have been some instances where new and more efficient forms of refrigeration have been publicized as an environmental commitment,” he said. “Another socially responsible option is to donate functional equipment to food banks or to companies that specialize in reselling secondhand refrigeration equipment.”

If someone is sitting on a few fixtures that never get used, giving them to a charity is always a good option, he added.