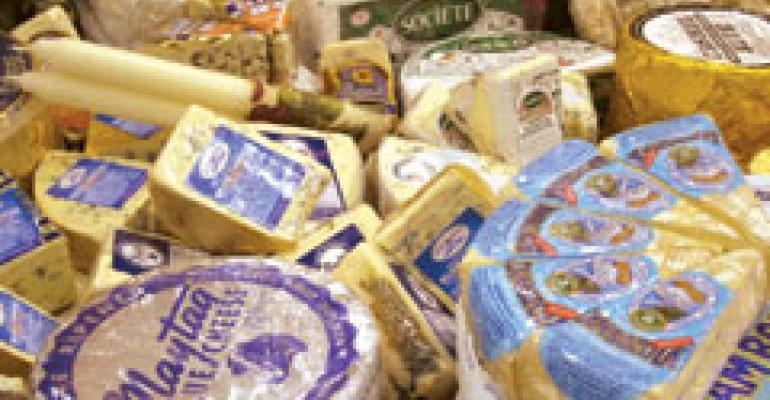 The specialty cheese category continued to grow through the recession, and should be headed for a good holiday season at supermarkets that have the right mix

This past year left little doubt that artisan and specialty cheese has established a firm foothold in mainstream supermarkets. During a challenging year, specialty cheese demonstrated surprising resilience for a premium category, with dollar sales per store, per week up to $1,597 in calendar 2009, compared with $1,573 in 2008, according to data from the Perishables Group, West Dundee, Ill.

Twenty-four dollars per week may not look like much, but to put those figures in perspective, supermarket deli and cheese departments were selling $1,347 of specialty cheese per store, per week in 2005. The category grew almost 17% during the next three years, and it didn't give up any of those gains during the recession.

Continued growth, of course, will depend on encouraging more shoppers to try specialty cheese, and to continue attracting the category's biggest fans with new and exciting products.

One good way to do that is to keep track of the latest trends, and keep your ear to the ground to find exciting new imports or small-batch domestic gems, one retailer noted.

“Defining the mix is an ongoing process,” said Allan Bandy, deli-foodservice field support and resident cheese expert for United Supermarkets, Lubbock, Texas. “You try to stay new with the market. A lot of what we've done through the years is go with what's popular, but also talk to [customers] who have traveled overseas, or who are from overseas, and are looking for something that reminds them of home. Or, it could be something that they tried while traveling that was just phenomenal that they want to get when they come back to the States.”

United's three different banners offer customers three distinct experiences. Its upscale Market Street locations offer between 300 and 400 different imported and domestic cheeses year round, with the mix changing regularly based on availability, seasonality and other factors.

“We really represent standard families and categories that you would see at almost any cheese shop or cheese supplier,” at Market Street, Bandy explained.

“Our cheese list that we have approved for our Market Street stores is 18 pages, and it's four pages for the core [United] stores. In that, there's probably a total of 100 or so cheeses, and a lot of other things — pâtés, specialty crackers, charcuterie items. Everything is scaled down for the core stores … we cover the same categories, we just don't offer as many varieties.”

And, finally, the company's Amigos locations, which cater to the market's large Hispanic demographic, offer a similar, pared-down selection of specialty cheeses, along with a full line of Hispanic cheeses.

“I don't know that there's a secret formula that we use, it's really just making sure that the staples are covered and making sure we listen to our guests,” he said.

In terms of topline trends, total U.S. specialty cheese sales averaged $2,633 per store, per week throughout the country, according to Perishables Group data. Sales were much stronger than that in the Eastern region, at more than $4,900 per store, per week, and much weaker in the South, at about $1,800 per store, per week. The Central and West regions were both closer to the U.S. average.

And, shoppers appear to be experimenting with bolder flavors. For example, during the 52-week period ending Aug. 28, feta cheese increased to 7% of the specialty cheese category, representing a 4.7% increase in category share growth from the same period a year earlier. Specialty Parmesans and cheddars also posted category share growth, and now represent 9% of the category each. But, the fastest-growing subcategory was “other flavored” cheeses, which are seasoned with rubs or infused with peppers and other ingredients. Those cheeses increased their category share by more than 8%, and now account for 14% of total category sales.

Marilyn Wilkinson, director of national product communications for the Wisconsin Milk Marketing Board, noted that this has been a trend with producers in Wisconsin lately, with some making cheeses rubbed with spices like paprika or cocoa, or washed in balsamic vinegar, for example. Smoked cheeses are also making a comeback, she said, and “there's no end” to the peppers and chilies that producers are putting into cheeses.

It's important to stay aware of these general trends, Wilkinson said, but retailers also have access to plenty of scan data that should help deli departments and in-store decipher what type of shoppers are visiting their departments, and help department managers develop an assortment tailored to those shoppers.

And, while a department's most loyal customers may not need much encouragement to spend $10 or more to try something new, customers who are just getting started with the specialty cheese category will likely show some trepidation when they're looking to expand their horizons.

“People absolutely want to try new cheeses, but there's two things that set them off about it,” said Wilkinson. “One is that they don't know how it will taste, so that makes a very strong argument for sampling. The other is that they don't know how to use [a new cheese]. So it might be that the deli or the cheese area should have some cards or something available to the shopper that says, ‘This cheese melts well,’ or, ‘It's similar to a gouda,’ or another type of more familiar cheese. That way they can at least know the family that it's from. It's an indicator of whether it's a really strong-tasting or a milder-tasting cheese. They really need to have that type of information.”

The price of many specialty cheeses isn't necessarily a deal breaker for shoppers who are beginning to explore the category, but cost does amplify their concerns about making a purchase they may not be happy with. This is one of the key reasons why sampling is so critical with this category. WMMB consumer research also revealed that many shoppers say they would be more likely to try new cheeses if smaller portions were available for purchase.

“That was another thing people mentioned, was that they would really try things if they weren't pre-wrapped in half-pound or larger sizes,” she said, noting that suppliers such as Roth Kase have recently started offering sampler packs featuring small portions of several different cheeses.

And, Wilkinson added that cheese is still more widely used as an ingredient than it is eaten out of hand. So, recipe cards or pairing ideas can also help seal the deal when introducing a shopper to a new item.

“The more the shopper knows about it, the better the chance that they will buy it,” she said.

Communicating information about a cheese is a critical aspect of selling the specialty category, Bandy said, and there are lots of ways to get shoppers excited.

“There's just so many ways you can describe a cheese, beyond what it tastes like.” Many artisan cheeses have very involved stories, he explained. They may be produced only during a specific time of the year by a specific breed of cow that eats grass grown from the mountain snowmelt in a specific region of the world, for example. These types of origin stories emphasize the uniqueness of these products and help shoppers appreciate the category.

“The best way to learn about the product is to appeal to all of your senses,” Bandy said. “And, the best way to make it stick is to have people touch it, taste it, smell it and appreciate it.”

Half of shoppers expect life to return to ‘normal’ in less than six months, study says
May 28, 2020

There’s still a place for organic and free-from varieties in the meat case
May 27, 2020