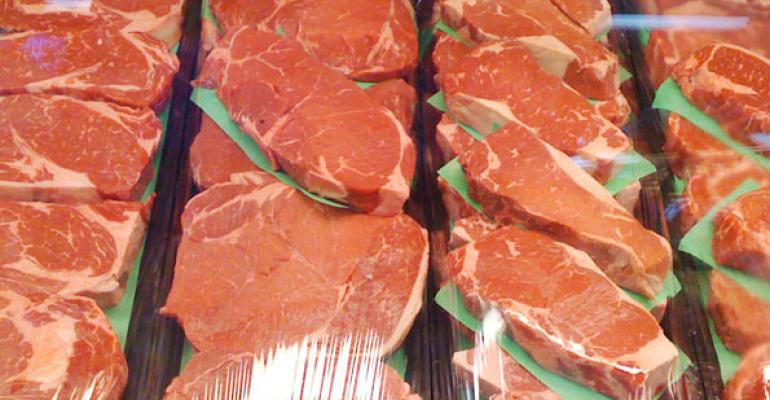 UTICA, N.Y. — Chanatry’s Hometown Market has just celebrated 100 years in business, and its owner gives much credit for such longevity to the company’s service meat department.

The family-owned company started out here with a small shop featuring local produce and, later, service meat. After relocating and expanding a few times, the company has tripled the size of its meat department since 1987. Now, it features a 60-foot run of service case, staffed from 7 in the morning until closing time at 11 p.m.

In addition, one of Chanatry’s six meat cutters stays on duty until 8 in the evening. Next to the service case is another 60-foot run of multi-deck self-service case. Then, another 60 feet of coffin case displays cured meats, including store-made kielbasa and other items.

“Our meat department is our gemstone,” owner Bill Chanatry told SN. “Most stores shy away from service meat because it’s so labor-intensive but that’s one of the things that makes us stand out.”

In a sea of competition from big chains in this upstate community, the single-unit market’s service has proved to be effective.

“With someone behind the counter, we’re in face-to-face contact with the customer, and that’s valuable,” Chanatry said.

It must work because this supermarket, with just about 40,000 square feet of retail space, easily sells 30,000 pounds of red meat a week as well as lots of chicken. In fact, meat department sales make up 25% to 30% of total store sales, Chanatry said.

“It’s service, but quality, too, is important. We’ve never scrimped on that.

In this highly competitive area, setting oneself apart is a feat.

“They’re all within three to five miles. A Price Chopper is no more than a mile away.”

Hagg is set up now for grilling season when custom-cutting steaks is a big plus.

“Especially up north here, people get cabin fever, and they get out with the grill as soon as they can. May and June are two of my best sales months. Mostly steaks and chicken.”

When he had boneless chicken breasts on sale for $1.69 a pound a couple of weeks ago, Hagg sold through 400 cases that week, he said.

“People grill a lot of chicken as well as steaks. I try to keep prices low all the time. Taking less margin, we have the lowest prices in town — for top-quality product. Our boneless chicken is always $1.99 or less, and 80% lean hamburger is under three bucks.”

But Hagg sells a lot of Chanatry’s store-made, all-sirloin, gourmet burger patties for more than that. His menu of gourmet burgers includes bacon cheddar, spinach feta, bleu cheese with sweet onion, portabella with Monterey Jack, and a buffalo burger containing bleu cheese and hot sauce. Weighing in at 8 to 10 ounces, those retail for $4.99 a pound.

Hagg displays the gourmet burgers — 8 feet of them — in stacks right in the middle of the service case.

“They’re an impulse buy,” he said.

Hagg and Chanatry stressed that perishables have always been the core of the Chanatry family business, a business that has survived the Great Depression and several recessions. Keeping its customers loyal over time has enabled the company to expand its offerings. For instance, a deli and an in-store bakery were added. The deli now — in addition to offering Boar’s Head meats and cheeses — features ready-to-eat hot food, and includes a carving station with roast beef, ham or turkey — sometimes all of those. Then there’s tomato pie, a regional favorite that sports a heavily spiced, thick tomato sauce.

“Along the way, we also added an in-store bakery, and tip-toed into it with bake-off products,” Chanatry said. “But now we’re mostly scratch. People come here for our from-scratch, hard-crust breads. We make good cakes, too.”

On May 9, the day of the store’s centennial celebration, bakery manager Brenda Choquette, baked and decorated a 4-foot cake in the shape of the storefront.

“Nobody wanted to cut it. It looked too nice,” Chanatry said.