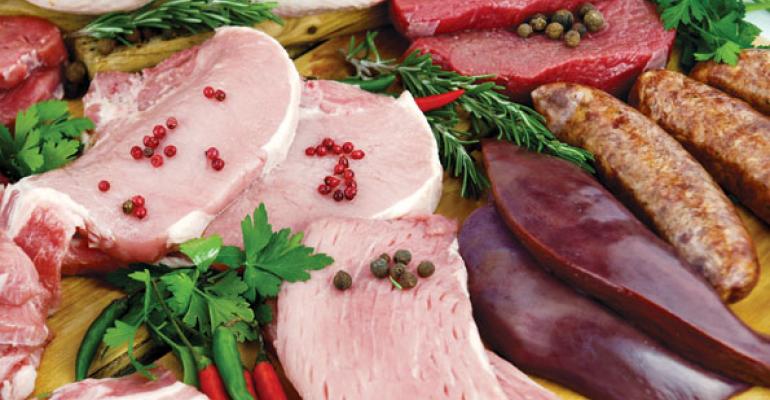 Culture Shop: The Meat of the Matter

To appeal to a multicultural shopper base, meat departments are offering more product information and meat cuts typically used in ethnic recipes

Chicken feet and fish heads. Oxtail and tripe Sophisticated retailers are meeting the meat demands of specific ethnic groups by merchandising and marketing a wider variety of beef, chicken and pork cuts that cater to their shoppers’ cultural culinary needs.

A select few retailers stock whole slabs in walk-in coolers (see photo, below left), cutting each item to specification. Many meat departments precut slabs into pieces for use in common ethnic fare. Some even showcase signs, on-pack messages and recipes written in multiple languages to communicate the product and use clearly to all customers.

At Publix Sabor stores, there is a high density of Hispanic and Caribbean shoppers in search of meat products used in traditional recipes from their homelands. Pigs’ feet, tripe, goat and oxtail are among the top sellers there.

The types and cuts of meat customers request vary from one ethnic group to another, according to Maria Brous, spokesperson for the Lakeland, Fla.-based chain. 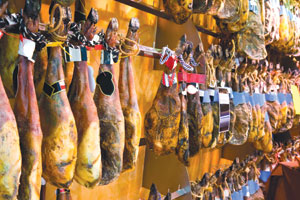 “We carry large slabs of beef for customers who want them cut to specification. Some just ask for steaks, but others want meat cubes for stew or ground beef for things like tacos and Cuban picadillo,” said Brous. “People from Caribbean islands often buy whole fish for grilling or baking and fish heads for soups.”

Trends at Publix Sabor are similar to those in other supermarkets throughout the country. During the period from May 2011 to April 2012, tail, tripe and tongue were top sellers in U.S. supermarkets, according to data from FreshLook Marketing Group, Hoffman Estates, Ill.

Peak beef sales occurred during June, September and various cultural holidays. Pork products that sold well during the same period include tail, tongue and tripe, with peak sales of these items occurring during the fourth quarter — October through December.

Brous stated that each Publix Sabor store carries a different assortment of meat and seafood items to meet the demands of its unique blend of shoppers. The chain’s staff frequently honors requests for even more meats not typically stocked there as well.

“Offering the products our customers want is important, but so is training employees to tend to all customers’ needs, going the extra mile to ensure that they have access to any type of meat they might want,” she said. “We also educate our meat department employees so they can share their expertise with customers. As a retailer, we’ll sell more meat if we can help people understand what it is and how to cook it.”

Educating employees is indeed crucial, said Danette Amstein, principal, Midan Marketing, Chicago. Amstein believes that department managers in particular must have a firm grasp on the precise demographic of consumers shopping their stores.

It is not enough to simply know the nationality of local shoppers, she said. Retailers should consider whether customers are first-, second- or third-generation immigrants. Amstein also suggests that employees learn about their customers’ traditions, including which holidays their shoppers honor and when they are celebrated.

“Most first-generation Hispanics, for instance, are more comfortable shopping at a bodega or carniceria because they are merchandised like meat stores in their homelands,” she said. “Supermarkets in areas with a lot of first-generation immigrants could benefit from creating a meat department that mimics the meat markets common to their customers’ cultures.”

Second- and third-generation Hispanic immigrants are more accustomed to shopping in American stores, and therefore, don’t require such extensive setups, she added.

Store owner Steve Hanna aims to offer familiar foods that can be tough to find in most supermarkets. He has taken extensive steps to make the shopping experience in his meat department comfortable for those with varying heritages.

“One of the first things we did when we opened this store was put in a walk-in meat cooler. It’s big enough for customers to walk through with their grocery carts and choose packaged meat from a whole, long line of racks, or they can go right to our butcher at the end of the room for service,” said Hanna. “Pigs’ feet and ears and cows’ feet are very popular for making soup. Oxtails and tripe are big sellers too.”

There is a big market for goat in Perth Amboy, where it’s popular with Dominican shoppers. The store also stocks whole pigs and whole cows in the cooler. The cooler, said Hanna, is what differentiates the supermarket from the competition.

Traci Rodemeyer, director of pork information for the National Pork Board, said that savvy retailers are using everything from brochures, meat case cards and posters, to on-pack stickers, in-store fliers and window signs to communicate with shoppers about products.

Most Hispanic shoppers surveyed during the study said they actively seek information about the meats they buy, and look for it at the point of sale.

“They are looking for signs, on-pack messages, recipe cards and other mediums that explain what the meats are, what recipes they can be used to make and details related to health,” said Rodemeyer. “While different shoppers have different levels of acculturation, it’s always a good idea to offer bilingual messages to eliminate the possibility of missing those who only speak their native languages.”

When it comes to marketing meats en masse, Williamsville, N.Y.-based Tops Friendly Markets takes a multi-tiered approach. “We carry everything from chicken feet to salmon heads and lots of smoked offals, but we don’t put these items in our regular circular. We use those to appeal to the masses, not specific ethnic groups,” said Lane. “We do include these types of meats in in-store fliers and window signs, though, because that’s where those shoppers have come to expect information about what we carry.”

Like Fine Fare/Dolcy Foods in Perth Amboy, Tops has a wide mix of ethnic groups to market to at its many locations. Around 30% of the chain’s stores have some Hispanic influence. Another 25% of Tops’ shoppers are what Lane considers “urban-influenced.”

“We also have Jewish or kosher shoppers who shop at about 25% of our stores,” he said. “In order to address the needs of all of these groups, we carry over 50 different specialty meat SKUs in pork, beef, smoked meats, chicken, turkey and seafood.”

The case sets differ from store to store at Tops. Each one is first packed with standard types and cuts of meat that are commonly purchased by mainstream customers. Then, variety meats are added in based on the demographics of the local market, said Lane.

“Any meat can be labeled to help shoppers better understand what they are looking at,” said Amstein.

“In markets where shoppers hail from places like Argentina, Brazil, Chile, Colombia, Mexico or Venezuela, thinly sliced packages of beef could have signage nearby or stickers on the packs that say, ‘Use to make Milanesa,’” she said.

By simply communicating what the meats are and what recipes they are commonly used in, supermarkets can help eliminate a major barrier for people purchasing products in the meat department.

As convenience becomes increasingly important to all shoppers, retailers should pay even more attention to packaged meats, said Rodemeyer, who noted it is important to provide detailed product information in both full-service and self-serve display cases.

Taste remains the biggest influencer of meat purchases across all ethnic groups, according to the National Pork Board’s studies. But convenience has and will continue to impact purchase patterns as well, she added.

The Other Cuts: Ethnic Meat Cuts Could Appear in Mainstream Meals
Oct 24, 2011
Authenticity Matters Most to Ethnic Food Fans
Feb 29, 2012