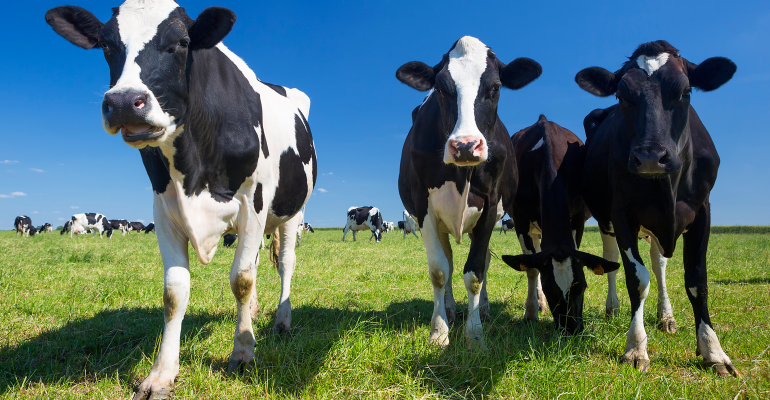 Enlightening news from the cows It began with an assignment to unpack what it meant now that there is a new U.S. Secretary of Agriculture taking office, and turned into a little more.

As I listened to Sonny Purdue tick off that what was important to him in an address after he took office this week, it became clear very early on this was not necessarily a man after Donald Trump’s rhetorical heart: International trade? He’s all for it.

So in an attempt to get a little more perspective I called Denver-based colleague Burt Rutherford, a journalist covering beef suppliers for publications under our common corporate parent. That turned into an enlightening conversation for both of us. After getting his take on Perdue – in short, agriculture is strongly behind the appointment and is hopeful that the president’s seeming hostility to trade is just a lot of bluster because they feel Perdue is genuine in his support – our talk turned to the beef industry supply itself, which for the past year has been at the heart of stubborn retail deflation that’s done a number on supermarkets.

Rutherford told me the price decreases in beef likely have less to do with a strong U.S. dollar pressuring exports than it does with an industry overcorrection from what he termed historic shortages of supply that drove higher prices and profits for everyone earlier this decade.

Basically, there are more cows going to market today than there were a few years ago, and as Rutherford explained, “in a commodity market it’s just not reasonable to expect you’ll be profitable every year.” Good ranchers, like good retailers, have learned to invest the profits from the good years into their businesses to ride out the tougher ones, and the price of burger meat in your stores – and if you’re good, how much more you’re selling today – is evidence of that.

The production cycle, by the way, tends to adjust gradually, he added. The good news is there’s evidence of such today in increasing numbers of heifers being held back to breeding herds rather than going to market.

You can take in Burt’s version of our talk here.

A peek into the distant future

The company is called “code eight,” and you’ll just have to wait and see what it does.

That’s the word from Wal-Mart Stores’ new retail tech incubator, which this week announced it was establishing its first portfolio company to be headed by Jenny Fleiss, a co-founder of the groundbreaking Rent the Runway business.

Walmart e-commerce CEO Marc Lore earlier this year announced the formation of the incubator – called “Store No. 8” after a Walmart location in Arkansas where founder Sam Walton was known to experiment. Spokesman Ravi Jariwala explained to me that Store No. 8 and its portfolio companies are concerned with nascent technologies and capabilities that won’t be ready for five or seven years at least. That’s important, though, because it allows the bulk of the organization to maintain distraction-free focus on what it does every day.

“One of the things Walmart does really well is execute at scale every day, and in order to do that at our size, it takes a lot of focus,” Jariwala explained. “It is therefore difficult to maintain focus on that everyday execution and at the same time have dedicated focus and attention on all the innovations that are not yet right for today. What are the things coming over the horizon?”

As for code eight, Jariwala would only share that it will focus on “highly personalized, one-to-one shopping experiences.”

Whole Foods may remain single, too

Reaction to Whole Foods Markets’ fate in the aftermath of the Jana Partners investment continues to pour in faster than I can include it in stories.

To the extent a consensus point of view is developing, I’d say very little has changed with regard to an understanding of the company’s challenges; where things are all over the place is in imagining the ways in which Whole Foods could address them, with some observers arguing for the potential of hooking up with a parent (Kroger, Albertsons and Amazon have been mentioned recently but does anyone remember chasing down the Publix rumors a couple years ago?). Others, like Jay Jacobowitz, a natural industry consultant with Retail Insights, argued eloquently this week that Whole Foods would be best off working out its troubles alone.

“The goal of 1,200 stores, always puffery, has been set aside, and new store development now has necessarily slowed. With as long as it took Whole Foods’s management to acknowledge and act on this reality, you can see why Jana entered the picture,” Jacobowitz told me this week. “But I don’t see a Kroger, say, being able to fix Whole Foods’ strategic problem: how to retain its premium market position while taking costs out of the system. You can streamline, centralize, reduce labor in store, but not without threatening Whole Foods’ fundamental point of differentiation: an uplifting, inspiring, flattering, informative and delicious shopping experience.

“But, if I’m Whole Foods’ management, I have to try,” Jacobowitz added.