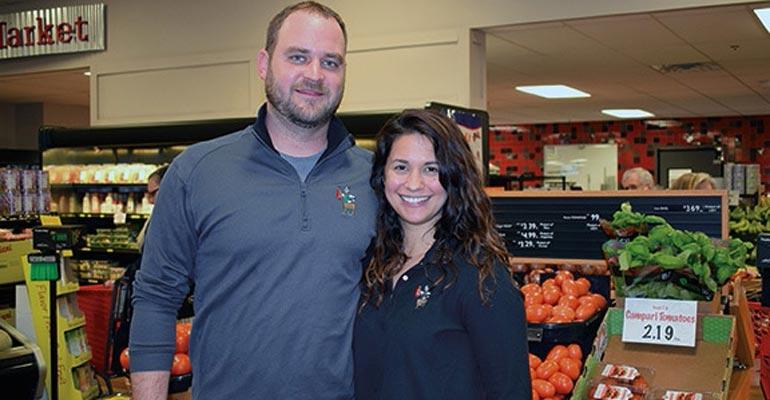 Family-owned store expands into the community

This Chambersburg, Pa., family business has gone from butcher to café and, most recently, to commercial kitchen and event space

A longtime community favorite in the Chambersburg, Pa., area—and a growing destination favorite thanks to its convenient access to busy Route 81—The Butcher Shoppe doesn’t rest on the laurels of its excellent reputation and long history.

Third-generation owners Leo and Anne Schoenhofen (Anne’s parents and grandparents were previous owners) are continuing to bring new ideas for growth and improvement to this onetime traditional butcher’s market-turned-full-service café, bakery, deli, grocery, and the launching pad for an upcoming brand-new business, a commercial kitchen with a modern event space.

Going back in time

But before looking ahead, let’s take a look behind at the history of The Butcher Shoppe. The business was founded as Kennie’s Market back in 1957 at a different location in Chambersburg. The company was purchased by C. Glenn Koons and his wife, Lorraine, in 1964, starting the tradition of family ownership that endures today. It was in 1977 that The Butcher Shoppe opened at its current location on Stouffer Avenue, and 40 years of expansion and greater success followed. The site continued to grow, with added deli, bakery, produce and grocery sections. Freshness and local sourcing where possible are watchwords of The Butcher Shoppe.

But the biggest innovation under the Koons’ ownership would be the addition of the Big Oak Café in 2005. That changed the trajectory of The Butcher Shoppe to a new direction that has helped redefine the business.

In 2006, Mary Sue Keath, the Koons’ daughter, and her husband, Frank, assumed ownership of The Butcher Shoppe, which they held until 2016 when their daughter Anne took over the family business with her husband, Leo. He serves as president and CEO, while Anne is the vice president of marketing.

The Butcher Shoppe is not a traditional supermarket, but rather, as its name implies, its reputation and focus are based in its butcher’s market beginnings, which created an emphasis on freshness that stands today. And all of the changes and enhancements have been made with freshness and high quality top of mind.

“We first added a kitchen back in the 1970s to complement the success of the butcher shop,” said Anne Schoenhofen. “That success was followed by a bakery in 1986, and the addition of fresh seafood and cheese in our deli, along with a grocery selection.” Fresh meat was one of the founding principles of The Butcher Shoppe, and remains so today.

The Butcher Shoppe offers a different experience than a traditional supermarket, said Schoenhofen. Service cases are installed throughout the store and shoppers receive personalized attention from the associates who have strong product knowledge. High-quality meats, poultry and seafood fill the cases. Butchers are available to make fresh cuts and answer questions. And they source as many items locally as possible.

And then there’s The Big Oak Café, which opened in 2005 and offers customers a place to enjoy coffee, espresso and other drinks, and breakfast and lunch items, such as salads, sandwiches, soup and desserts. The café provides seating for 60 and there is more on the outdoor patio. “The Big Oak Café is very much its own destination now, separate from the store,” said Schoenhofen.

Between The Butcher Shoppe and the Big Oak Café, the company now has more than 200 employees.

The full takeout or eat-in fresh menu, coupled with the freshness and quality at the butcher, deli, seafood and produce areas have combined to make The Butcher Shoppe/Big Oak Café the success it is, and the impetus for the Schoenhofens’ other plans.

One of those plans involved partnering up with Chambersburg’s best-known business, Martin’s Famous Pastry Shoppe (purveyors of the delicious potato rolls and bread). “We have a long history with Martin’s,” said Schoenhofen. “In fact, The Butcher Shoppe sold the first Martin’s roll!” The addition of the Big Oak Café to The Butcher Shoppe opened up a whole new business for the company.

Three years ago, Martin’s approached The Butcher Shoppe with the idea of bringing its café concept and menu items to the bakery company’s plant in a small-scale kiosk format. “And that’s how we developed our first micromarket, which serves as a lunch and snack stop for Martin’s employees,” Schoenhofen said. The success of that program has led to the development of another micromarket, this time at the Coyle Free Library in downtown Chambersburg.

Even more ambitious and inventive is Anne and Leo Schoenhofen’s next plan for expansion. The couple recently purchased a 7,200-square-foot, two-story brick warehouse in Chambersburg’s downtown neighborhood. They’re converting the space into a commercial kitchen on the first floor (to accommodate their growing kitchen needs at the Butcher Shoppe location), an event center on the second level and a rooftop deck. The Grant Street Loft, as the space is being called, will accommodate up to 200 people at special, private events such as weddings, business affairs, family celebrations, etc.

It’s part of a renewed growth in the downtown area, said Anne Schoenhofen, noting the recent addition of a microbrewery and winery to the area. “And we’re going with a very unique, industrial look,” she said, which fits in with the emerging downtown vibe.

The Schoenhofens expect the new kitchen to open in June, the loft to follow in October. But until then—and beyond then—the customers packing The Butcher Shoppe and Big Oak Café are keeping the couple plenty busy.