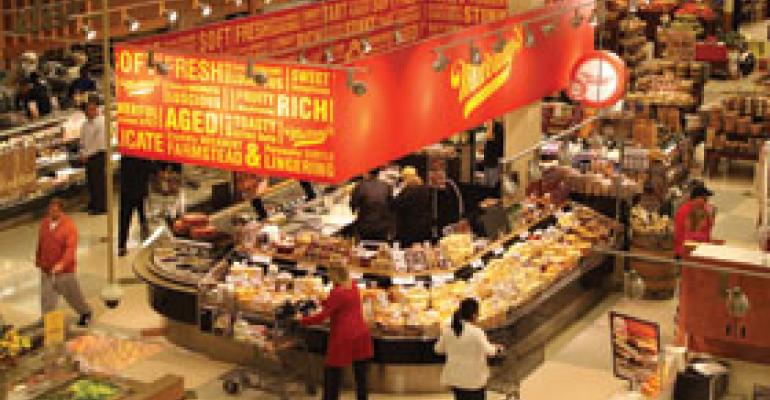 CINCINNATI The Kroger Co. and Murray's Cheese are ahead of schedule with their rollout of Murray's store-within-a-store concepts at selected Kroger locations. Just a year ago, Kroger announced an expansion of its partnership with Murray's, the New York-based cheese importer and retailer, by contracting to open 50 Murray's Cheese shops inside its supermarkets over the next three years. By the end of

CINCINNATI — The Kroger Co. and Murray's Cheese are ahead of schedule with their rollout of Murray's store-within-a-store concepts at selected Kroger locations.

Just a year ago, Kroger announced an expansion of its partnership with Murray's, the New York-based cheese importer and retailer, by contracting to open 50 Murray's Cheese shops inside its supermarkets over the next three years.

By the end of this year, the Murray's Cheese shops will already be in 22 Kroger banner stores, spanning three of the retail chain's divisions.

“We've completed the first round. Our contract called for opening at least 50 in three years, and, at this point, we're a step ahead,” Robert Kaufelt, Murray's president, told SN.

The most recent Murray's store-within-a-store was to debut on Dec. 4 at a Houston Kroger. It was the second Houston store to get a Murray's.

Not only is the project ahead of schedule, but overall sales are exceeding expectations, Kaufelt said.

And expectations were high. Indeed, the agreement to roll out Murray's stores to at least 50 Kroger locations in three years came about because three test stores opened in Cincinnati more than two years ago showed terrific sales results.

“After the Murray's stores went in, [specialty cheese] sales went up significantly, as much as 50% to 100%,” Kaufelt said at the time the expansion deal was closed.

The Cincinnati division now has Murray's stores in 13 locations, the Atlanta division in seven and the Southwest division, which includes Houston, in two.

“The latest opening in Houston will feature holiday-related items such as cheese platters, hot bries and some other things made at store level,” Liz Thorpe, Murray's vice president, told SN. “We'll also be featuring fresh mozzarella made at a farmstead operation in Waterloo, Wis.

“We love romancing a product, telling the story behind some of the cheeses.”

In Atlanta, Murray's brought in cheesemakers from different parts of the United States and overseas to tell their own stories.

In January, Murray's will whip up excitement with a 1,000-pound wheel of cheddar in a Kroger store in each division.

Special events mark the opening of each Murray's in a Kroger store. Thanks to the enthusiasm of Kroger associates in Atlanta, Murray's had a booth at the annual Taste of Atlanta event, in which restaurants and specialty stores participate. Consumers buy tickets and spend them to taste whatever they want to taste at the event.

“We ourselves didn't have the people to staff the booth, but the Kroger ‘cheese masters’ recruited for our in-store Murray's took it upon themselves to staff the booth,” Thorpe said. “Kroger associates handed out 1,400 Murray's cheese plates that day.”

Part of what makes the store-within-a-store locations a success is the excitement generated by the cheese master in charge of the Murray's store.

“It all depends on having the right person there,” Thorpe said. “We don't interview them, but the whole thing is such a collaborative effort, that Kroger knows exactly the type of person that will make it work.”

She added that in Atlanta, one of the Kroger store's co-managers interviewed 50 applicants for the cheese master's job, and out of those 50, she considered only two.

“That shows the level of commitment on Kroger's end,” Thorpe said.

Murray's does the initial training in product knowledge and care of product, but it takes a particular type of person to get excited about the product, communicate that excitement and turn it into sales, she said.

“When we're about to install a Murray's in a Kroger store, we bring the Kroger store managers and co-managers up to our stores in New York so they can see how we sell cheese, and that Atlanta co-manager told me that after seeing our operation, she knew exactly the type of person she had to have to run her Murray's store.”

The relationship between Murray's and Kroger is not an unusual set-up.

“It's a traditional licensing agreement we have with Kroger. In effect, we're paid a commission,” Kaufelt said.

But Murray's keeps close tabs on the operations.

Kaufelt stressed that he works very closely with distributors and that the buying power he has now — purchasing cheese for 22 stores plus his two New York stores — has brought costs down and thus lowered retail prices.

“Even in our stores in New York,” he said.

The partnership with Murray's gives Kroger stores an edge in competitive markets, heightens its image and gives its customers a larger selection of artisan cheeses.

For Kaufelt, the partnership is not only profitable, but helps him achieve a long-held dream “to bring great cheese to more people,” he said.

Kaufelt told SN he's been impressed by the efficiency of Kroger's operation, which has helped keep the rollout on course.

“The planning and leading up to a decision is a process of a certain sort, but when the decision is made, it's ‘lights, camera, action.’ No hesitation.”

Kaufelt and Thorpe were in Cincinnati last week, meeting with Kroger officials to plan which division and which stores will get the next Murray's.

“We, and Kroger, had just completed an analysis [of the project] and they seemed as pleased as we are with the results so far,” Kaufelt said.

That characteristic of cheese is highlighted when Murray's reps are training Kroger cheese masters.

A retail consultant emphasized, too, that educating customers about specialty cheese is a reliable sales booster.

“Retailers can certainly develop the [cheese] expertise on their own and chains like Wegmans, Central Market and Whole Foods have done a terrific job. The Kroger partnership with Murray's, too, is brilliant and is extremely well done. Great signing, service, assortment and education in a very compelling visual environment.”