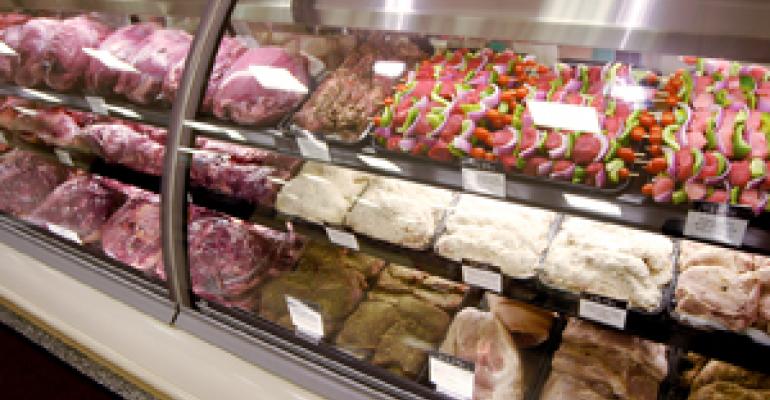 Pressed for time and rusty on cooking skills, shoppers are looking for simple ways to cook fresh foods at home. Supermarket meat departments have been looking for ways to help, expanding their offerings of preseasoned, preassembled or precooked poultry, beef and pork products. Meanwhile, premium cuts of beef are growing in popularity at many chains. Sales of both types of product, retailers say, point

Pressed for time and rusty on cooking skills, shoppers are looking for simple ways to cook fresh foods at home. Supermarket meat departments have been looking for ways to help, expanding their offerings of preseasoned, preassembled or precooked poultry, beef and pork products.

Meanwhile, premium cuts of beef are growing in popularity at many chains. Sales of both types of product, retailers say, point toward shoppers' desire to prepare restaurant-quality fare in their own kitchens or on backyard grills.

“People are trending toward gourmet-ish foods they can cook quickly but don't have to put together themselves,” said Mike Hoffman, meat director for Dahl's Food Markets, the 12-store chain in Des Moines, Iowa. “They want more exotic flavors like those they would find in restaurants, but they want to take them home and throw them right onto the grill or into an oven.”

Marinated chicken breasts and marinated turkey tenderloins sell well at Dahl's. So do the 10 varieties of stuffed chicken breast the chain carries, including pineapple and ham, and a mushroom- and hot-pepper-cheese-stuffed breast. The retailer also sells London broils wrapped in bacon, as well as savory spinach and bleu cheese rib-eye broils, seasoned beef kebabs, breaded turkey, chicken Cordon Bleu and a variety of other seasoned and prepared meats.

According to Hoffman, the chain used to make most of its value-added meat products in-house, but strict regulations and an ever-expanding line of offerings made it difficult to keep pace.

“We used to make everything ourselves, but now all products in the self-service case are required to have ingredient labels, which is too difficult to manage,” he said. “Plus, it would take too much time to prepare all the different products we now offer. So we order almost everything we sell.”

“Consumers love having the convenience of not having to slice and season their foods, and as they continue to develop an interest in recreational cooking, they're looking for better cuts and more upscale value-added meats,” said Wisner. “Retailers love value-added meats and premium cuts because they command higher margins, and there's even some store branding that goes on when their meat departments make something different than other chains are offering.”

The more oven-ready items a retailer has to offer, the better that retailer can compete with other channels as well, said Ted Taft, managing director, Meridian Consulting Group, Westport, Conn.

“Value-added gives the supermarket a weapon against takeout restaurants, which are also going after consumers who want to grab something for dinner but don't want to spend time preparing a meal,” he said.

“We also have premade ground beef patties for people who want to grill out,” Berry told SN. “For indoor cooking, we sell precut chicken and beef chunks for making stews, strips for stir-fry and pork cubes for making chop suey.”

“Shoppers are willing to try these marinated meats because they're flavorful and convenient and only a little pricier than the plain cuts,” he said. “The premarinated pork loins are priced at $4.49 per pound, and marinated pork sirloin runs $3.49 per pound, which is only 50 cents to $1 more than the same cuts of plain pork.”

Higher-quality premarinated meats like turkey breast and pork tenderloin are more expensive, at $6.99 per pound, he added.

At Orchard Market, precooked proteins, including sliced turkey or chicken, pot roast with gravy, meat loaf and beef tips made by manufacturers like Hormel and Bob Evans have also been gaining in popularity in recent years.

“These prepared meats are only $5.99 to $6.99 for a 17-ounce entree, and we stock them in our self-service meat case next to premade mashed potatoes, scalloped potatoes and other sides made by Country Crock and Bob Evans, creating meal solutions,” said Berry. “These side dishes are actually driving meat sales, so I've been putting pot roasts and other meats in our self-service case next to them.”

Orchard Market's Spring Lake location caters to a wealthier customer base, and therefore stocks thicker, more premium cuts in its self-service case. Its Fruitport store offers mostly midrange meats. Both stores put out a wider selection of premium, larger cuts of meat on Fridays, Saturdays and Sundays, when shoppers are most likely to purchase higher-priced items, he said.

One of the specialty items at Highland Park Markets, Glastonbury, Conn., is a beef pinwheel stuffed with blends of spinach and feta or asparagus and cheese, among others, said Brian DeVoe, director of perishables for the three-store, upscale supermarket.

“We also sell seasoned beef roasts, around eight varieties of stuffed chicken breast, marinated baby back ribs and a whole range of oven-ready gourmet items,” said DeVoe. “This is such a big category for us that we're considering hiring chefs to work at our full-service meat counters to create new value-added items and to give shoppers tips on how to cook them.”

“Buying marinated and seasoned meats enables consumers to try their favorite cut with a different taste, and a big source of new flavors is ethnic cuisine,” he said.

“Marinated and rubbed meats are planned for inclusion, and Thai and Latin-flavored cuisines may lead the way,” said Kurkiewicz.

Hot and spicy is indeed a favorite. Chipotle chili pepper is one of McCormick & Co.'s most popular flavor blends, due in part to its smoky taste and spicy kick, according to Laurie Harr-sen, spokeswoman for the Sparks, Md.-based company.

“People don't just like these spices for their heat's sake, though. They like them because the blends have a more sophisticated flavor that is often tempered with citrus, a touch of sweetness or tomatoes,” she said.

Top-selling infusions at Bi-Lo, Mauldin, S.C., include barbecue, lemon pepper, and garlic, said Bill Head, vice president of meat and seafood marketing for the chain. The retailer's meat departments add these three flavors to pork, beef and poultry throughout the year, and during the summer, halved barbecue chicken is a customer favorite, Head told SN.

The chain also has 18 varieties of poultry, including chicken Cordon Bleu and portobello mushroom chicken grillers wrapped in bacon.

“We also carry five gourmet burgers, including black-and-bleu cheeseburgers and bacon-and-cheddar burgers,” said Head. “And we offer a variety of precut meats for stir-fry, kebabs and Italian-style pinwheel steaks with spinach and provolone cheese, as well as meatballs, meatloaf and stuffed pork chops.”

“If someone is going to buy a ready-to-eat chicken, they want to bring it home and throw it right into the oven. They don't want to go searching for the right size pan that they'll have to wash later,” she said. “Having value-added meat that comes in oven-ready packaging will offer that much more convenience to the customer and result in a higher price margin for the retailer.”