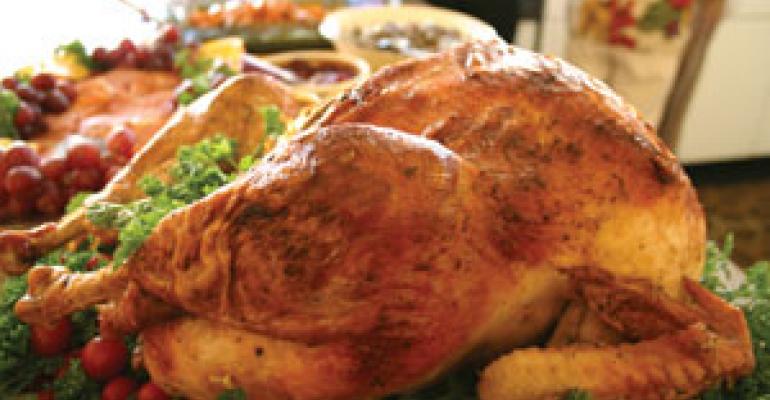 Today&#39;s holiday dinners may not be prepared exactly the way Norman Rockwell envisioned, but with consumers more pressed for time and less confident in the kitchen a growing number of shoppers are searching for easier ways to impress friends and family when they play host on Thanksgiving or Christmas. The holidays are a time to gather with family and friends and eat well and enjoy the finer things,

Today's holiday dinners may not be prepared exactly the way Norman Rockwell envisioned, but with consumers more pressed for time — and less confident in the kitchen — a growing number of shoppers are searching for easier ways to impress friends and family when they play host on Thanksgiving or Christmas.

“The holidays are a time to gather with family and friends and eat well and enjoy the finer things, yet so many of today's consumers are hesitant about their ability to pull all of that together,” said Roger Fickenscher, manager of food development for Snohomish, Wash.-based Dream Dinners. “That's what we're trying to offer — to say, ‘We understand that you may feel a little overwhelmed with this, because you're putting in 46 hours at the office, the kids have soccer practice and piano lessons, and those things are colliding with a holiday schedule.’”

The sentiments are similar at Charleston, S.C.-based Piggly Wiggly Carolina Co., which opened a Dream Dinners franchise at one of its Columbia, S.C., locations this spring. Housed inside the supermarket, the meal assembly area features a kitchen with fully equipped meal assembly stations, where shoppers pay a fixed price for all of the ingredients and instruction needed to quickly put together dozens of meal servings for their families. The meals are then taken home and frozen, ready to be cooked at any time.

Although enrollments at the meal assembly center slowed down a bit during the summer, business picked up significantly when the school year began, and the popularity of the program has grown even more as the holidays approach, noted Rita Postell, manager of employee and community relations for the supermarket chain.

“A lot of people have a special, traditional dish that they want to prepare [for holiday meals], but they don't necessarily want to reinvent the wheel and do everything,” she said. “This gives them that option, because everyone gets a little stressed during that time of the year, and they certainly want to be able to enjoy the holidays without feeling like they're chained in the kitchen the whole time.”

In an effort to accommodate shoppers who want turkey and all the trimmings ready to go on the big day, as well as other shoppers who may just want to simplify side dish preparation, for example, the Dream Dinners program is divided into two segments.

Customers can purchase a holiday meal solution that includes a boneless turkey breast from Jenny-O, as well as a selection of hors d'oeuvres and a New York-style cheesecake with pumpkin and apricot sauce. All of these products are frozen passthrough, and don't require any assembly, Fickenscher said.

Separately, Dream Dinners locations are offering a “side station” workshop this year, featuring casseroles and other side dishes that Fickenscher described as “traditional with a slant.” Developed by the company's chefs with the editors of Southern Living magazine, the dishes include a three-cheese mashed potato casserole, a green bean and mushroom casserole, sausage stuffing mix, turkey gravy and fresh cranberry relish.

“It's another enhancement to the experience of grocery shopping,” said Postell. “The community has really appreciated this convenience.”

Noting that the Columbia, S.C., Piggly Wiggly location was currently the only store in its market area with an integrated meal assembly center, Postell added “you're in a grocery store setting, too, so if there are other things you need to pick up, it's a one-stop shopping.”

That exclusivity may not last for long. Asheville, N.C.-based Earthfare also launched a proprietary meal assembly program this spring, and Lakeland, Fla.-based Publix has been experimenting with a similar concept at its stores with Apron's Cooking School locations.

But while many harried holiday shoppers are eager to embrace convenient new solutions, they still want their Thanksgiving feasts to be special and unique. Ever since shoppers began requesting the service in the early 1990s, Wilsonville, Ore.-based Lamb's Thriftway has had its catering staff put together full holiday dinners for the company's customers. Partner Tanney Staffenson noted that the ongoing evolution of the program — spurred, as always, by customer input — and the extensive opportunities that shoppers have to customize their meals have kept the program growing year after year.

“The needs vary from one customer to the next, so where you can, you don't want to do a cookie-cutter program,” he explained.

THE PRICE IS RIGHT

During the past few years, other convenient holiday options, such as meal assembly franchises, have begun to emerge as competition to catering and prepared-food programs like Lamb's offers. But Staffenson said that those new competitors hadn't had much of an impact on the chain's holiday meals business, other than pushing the program toward a multi-tiered model featuring various different pricing options.

“What we've tried to do is just follow the customers' needs and make sure we have enough offerings for them — a couple of different levels of meals,” he said. Selections range from what type of turkey to order — from a simple frozen turkey to a fresh, all-natural brand or a bird smoked in-house at Lamb's — to what types of side dishes to choose. Green beans, for example, can be ordered plain, or prepared as part of a casserole with bacon and onions, and shoppers have plenty of options for dessert. Finally, shoppers can either pick up the meals or have them delivered to their homes. In some cases, Lamb's will even provide catering services for the big day.

“For most families, this is the biggest sit-down meal of the year. And it's a huge issue to people — they want it to be right. They want their family to be pleased with what they're getting, and we take that very seriously. We just try to give them more options, because most people want [a meal] that's got a little more going for it on that particular day.”

As a result, Staffenson said, the holiday — and the available meals service — presents a great opportunity to urge shoppers to go a little upscale. He noted that the chain has been seeing a lot of growth in natural, organic and specialty meats during the holidays.

But overall, Staffenson said, simply offering shoppers an anxiety-reducing alternative to slaving away in the kitchen will be rewarded with loyalty.

“For some people, they have family coming in from out of town; they're people they haven't seen sometimes in years,” he said. “They want to spend as much time with them as they can. There's also a lot of people that don't know a lot about cooking nowadays. Think of the wife or mother who has never cooked a turkey, and the whole family is coming over. She's worried about whether it's going to turn out OK — and we become an option for that customer.”

At Meat Conference, retailers and suppliers look back on a year of COVID
Mar 24, 2021