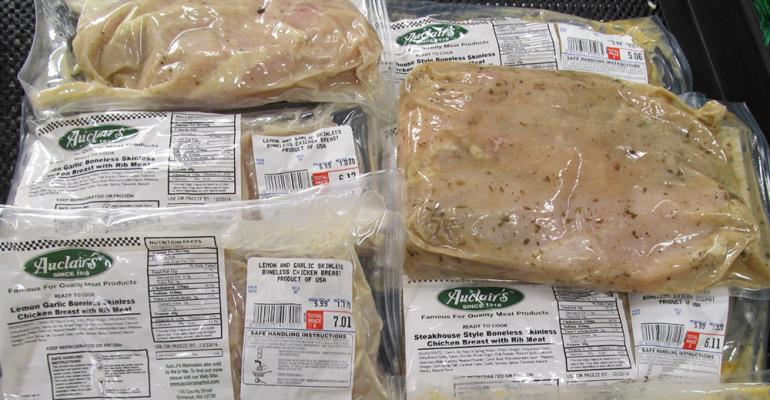 So tightly woven into the DNA of the meat department and the store perimeter is fresh chicken that it’s easy to take the humble protein for granted. Retailers that do so, however, risk missing out on opportunities to not just grow sales within the category but throughout the store as well.

By incorporating his homemade marinades, which the store began manufacturing in the mid-’80s and which it sells by the bottle in the grocery and meat departments, Auclair said he’s able to spice up an often uninspiring protein.

“Anybody can sell chicken, but you have to be progressive about how you’re presenting it to the customer,” Auclair said. “That’s always been a key to growth for us.” Convenience and flavor innovations are also part of the fresh chicken playbook at nearby Roche Bros. in Wellesley Hills, Mass. In November, the 18-store retailer began selling heat-and-eat meals that combine a fresh protein from the meat department, vegetables from the produce department, and oftentimes a starch or a grain. Called Ready. Chef. Go! — after the manufacturer of the microwaveable, oven-safe bags that each meal comes in — the line features dishes developed by Roche Bros.’ chefs, like marinated chicken strips with peppers, onions, mushrooms and water chestnuts, and breaded chicken cutlets with potatoes and asparagus.

Currently, the meals appear in a four-foot case inside store meat departments.

“We were looking for a time-saving meal solution for our customers that was fresher and better for them than a frozen meal,” said Arthur Ackles, Roche Bros.' meat and seafood director. “We put together a bunch of recipes, and naturally a lot of them feature chicken.”

Sales data supports this focus on unique products and flavor profiles. Indeed, while conventional packaged chicken sold out of the self-service case makes up the bulk of category purchases, sales have been flat or declining for several years. During the first half of 2016, according to IRI, conventional chicken sales declined nearly 3%, while natural chicken grew by 31.5% and organic by 31%. Value-added chicken sales increased by 2.5%.

Anne-Marie Roerink, principal at 210 Analytics and author of the Food Marketing Institute’s annual Power of Meat report, said value-added chicken in particular offers a great way to reach fresh-focused shoppers, including the coveted Millennial demographic. She cited recipe-ready meal kits, which grocers like Giant Food and Hy-Vee have begun dabbling in, as appealing to these shoppers’ desire for flavor, convenience and wholesome ingredients. Stuffed chicken breasts are one way Auclair’s adds value for its customers and to its bottom line.

At the same time, Roerink noted, retailers who invest in value-added chicken need to make sure their selection doesn’t stagnate.

“More Millennials buy more value-added chicken, but their spend per buyer is lower, indicating constant flavor and trend innovation is needed,” Roerink said. “It is important that the price differential is commensurate with the perceived convenience benefits of value-added.”

When it comes to fresh, packaged chicken, sources said growth could be found in special attributes like all-natural, air-chilled and antibiotic-free. Packaging innovations like easy-to-open, microwave-safe and leak-proof, noted Roerink, are also catching shoppers’ eyes.

Numerous retailers have begun incorporating health and efficacy claims into their store brand meats. Aldi recently debuted its line of Never Any! chicken raised without the use of hormones, antibiotics or animal byproducts, while Sprouts carries an all-natural chicken produced without “enhancers, solutions, chemicals or artificial ingredients,” according to the company website. Dorothy Lane Market in Dayton, Ohio, offers a store brand of “free-roaming” chickens raised with access to pastures.

Ackles, who said consumers generally see chicken as a clean, healthy food, has seen surging interest in antibiotic-free over the past few years. The claim has been so popular with Roche Bros.' packaged store brand chicken that he and his team recently introduced an antibiotic-free deli chicken, available for sandwiches and by the pound.

Focusing on fresh chicken offers benefits for stores beyond the meat case. Chicken recipes draw in all sorts of produce and grocery items, while prepared foods feature chicken in myriad ways. During grilling season, marinated chicken can be a way to spur interest in grills, kitchen utensils and other nonfood items. Chicken breast alone, Nielsen data shows, connects to 133 different categories, burnishing the lean protein’s reputation as a true basket builder.

“Given the popularity of chicken, the competition across channels is strong and differentiation in the chicken segment is important to drive traffic, department and total store sales,” said Roerink.