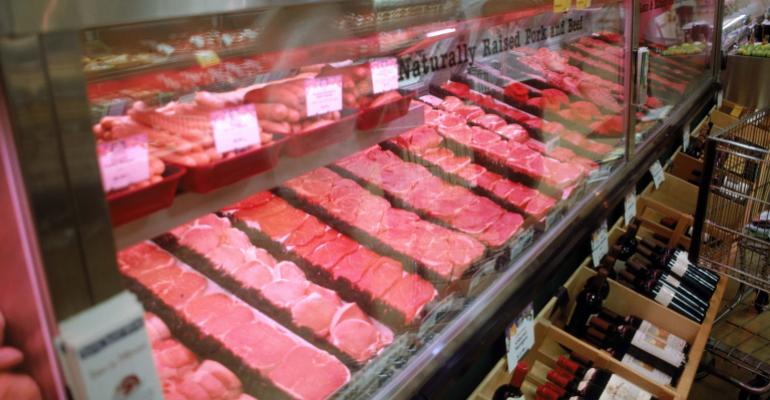 Beef demand in the retail case has increased about 6.5% since the fall of 2012, a spokeswoman for the National Cattleman’s Beef Association said. Premium cuts, in particular the loin, have been the driver behind beef’s bump. And consumers have paid for it: Prices for these high-end cuts were 21% more than they would be if demand had remained steady.

So what’s behind the rise in premium cuts of beef? Low unemployment rates and rises to median wages.

“Consumers have remained willing to spend on beef, and retail prices have remained firm,” the spokeswoman said, adding that even an increase in supply has not bogged down demand.

On the other side of the meat case, pork rode modest cold storage supply to strong pricing benchmarks this summer.  But even as the market begins to level out, pork is still a butcher counter driver, according to Patrick Flemming, director of market intelligence for the National Pork Board.

As is the case with beef, higher value is catching the consumers’ eyes. Flemming labeled value-added pork as one of the sector’s “fastest growing categories.”

Flemming noted that value-added options such as preseasoning cuts of meat reduce guesswork for consumers, particularly those that may be inexperienced in the kitchen.

“Making it easier drives category growth,” Flemming said. He recommended that retailers do what they can to take the shopper “one step closer to dinner” when they pick up their meat products.

“Ground turkey now comes in all forms from chorizo and Italian-seasoned to patties, sausages, meatballs and more,” National Turkey Federation chairman Carl Wittenburg said in an interview earlier this year.

He also mentioned that turkey had experienced recent, long-term growth across a variety of parts, including wings, necks drumsticks and cutlets.

A communications specialist for Minnesota-based Coborn’s Inc. agrees that efficiency and upgraded options are key to shoppers seeking protein selections.

The retailer cuts steak, chops and poultry selections to single-serving portion sizes and also offers a variety of selections pre-coated with seasonings. Coborn’s also encrusts products in toppings such as pecans and coconuts, breading or flavored marinades.

The spokesperson said that these upgraded selections and combinations allow shoppers to place the nutrition of a well-balanced meal on their dinner table via minimal prep time.