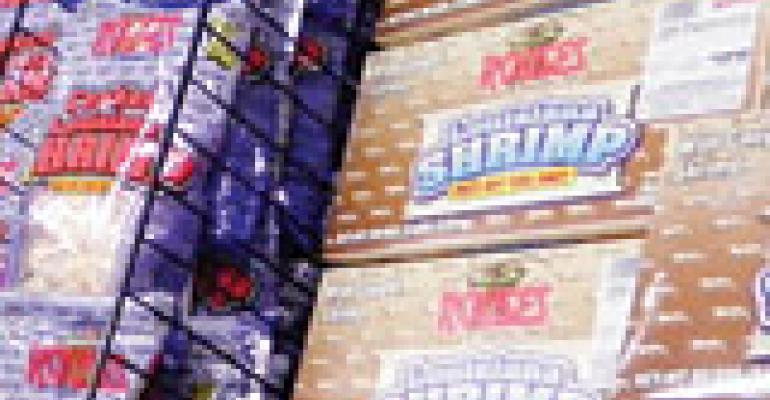 BETWEEN THE RECESSION AND THE LINGERING EFFECTS of this summer's Gulf oil spill, supermarkets are navigating some choppy waters around the seafood department.

That's a tough proposition, especially after many of them have invested heavily in transitioning to a more sustainable line of offerings — oftentimes working with suppliers to retool their operations and ensure the future health of underwater habitats.

And yet, creative merchandising has prevailed as supermarkets turn to value-priced frozen options that can punch up sales while still upholding sustainable values. According to data from SymphonyIRI Group, sales of frozen fish and seafood grew by 10% over the past year. That's more than five times the growth seen in fresh seafood.

“We definitely saw an increase in the frozen business this year,” said James Breuhl, seafood director with Rouses Supermarkets, Thibodeaux, La. “With everybody having a tight budget, the consumer is looking for a high-quality product at a good price. We're coming to an agreement with our suppliers that everybody has to give up a little bit right now in order to pass that along to our customers.”

Tops among Breuhl's frozen options is Rouses' store-brand one-pound bags of local shrimp, which saw a sales increase of 60% over the past year. He hopes to start a private-label bagged fish program sometime next year, as well.

Other retailers have taken a similar tack, offering private-label frozen seafood and seafood meals with a focus on health and sustainability. Last year, Safeway came out with Waterfront Bistro, a line of value-added grilled entrees, sides and sauces. Target, which offers frozen seafood under its Archer Farms brand, announced earlier this year that it would source only wild-caught salmon.

“Value” is the key word in the seafood department right now, according to Tom Demott, a former seafood manager with Safeway and current managing partner with Encore Associates. Pinched by the economy yet still looking for healthful meal options, consumers are looking for multipacks and other low-price options.

“Many consumers have migrated to the 2-pound and 3-pound packages of frozen seafood,” said Demott. “It's like we've seen with frozen boneless, skinless chicken breasts. They like to have that product to fall back on.”

“The wild salmon and the albacore tuna always sell well, and we always have success with whatever white fish is value priced at the time,” said Lisa de Lima, vice president of grocery at MOM's.

Between the value offerings, private label and consumers' growing desire for healthier seafood, demand is shrinking for traditional items like fish sticks that once dominated the freezer case, Demott said. To stay relevant, many of these manufacturers have reformulated products and added healthful alternatives. Gorton's, long synonymous with breaded fish, also carries a grilled line of entrees. Seapak, meanwhile, promotes many of its offerings as a good source of omega-3s.

“Breading doesn't exactly connote health, but they've tried to do things to make them healthier than the traditional products they've sold for many decades,” said Demott.

Supermarkets are retooling their operations in a different way. In July, Delhaize America launched a program that will require all of its seafood suppliers — whether fresh catches or frozen fish filets — to establish a sustainable management plan by March of next year. Suppliers will have to meet specific goals set out by Delhaize, including maintaining appropriate stock sizes, using sufficient monitoring equipment, and setting down a plan for rebuilding stock sizes should they fall below appropriate levels.

The program also encourages local sourcing to supermarkets like Scarborough, Maine-based Hannaford, where North Atlantic seafood is both popular and convenient.

Whole Foods, Safeway, Trader Joe's and others have launched similar programs. It's to the point, in fact, where most suppliers are proactively altering their operations, according to Jen Levin, sustainable seafood program manager with the Gulf of Maine Research Institute, which is partnering with Delhaize.

“It's becoming clearer and clearer that seafood suppliers need to demonstrate that what they're providing is coming from a responsibly managed source,” she said. “For the most part, nobody is surprised by this. It's an expectation on the part of the retailer and consumer.”

The proliferation of certified-sustainable labels on everything from frozen shrimp to canned tuna reflects this growing concern among consumers. But industry analysts warn that concern doesn't always translate to comprehension. A recent poll conducted by the Perishables Group found that only 31% of consumers claim to be knowledgeable about sustainable seafood.

“There's a high degree of interest and consumer sensitivity around sustainability, but the reality is consumers can't really define that,” said Steve Lutz, executive director of the West Dundee, Ill.-based consulting firm.

The problem, Lutz explained, is a combination of consumers not understanding the various certification standards out there, as well as not really comprehending the problem itself. Progressive retailers can help connect the dots at the shelf level, he said. This might include copying the marketing template they use for local products, or using signage that tells a company's story.

“To the extent that a retailer can help consumers understand the connection between sustainability and the products that are offered for sale, that's very important,” said Lutz.

At MOM's, making those connections can also mean making difficult choices. The company only sources seafood that's been green-listed by Monterey Bay Aquarium, meaning they're getting the ideal of well-managed, flourishing species. But when something slips out of the green, as Alaskan white pollock did earlier this year, then MOM's has to pull that product and any of its frozen and value-added items that contain it.

To communicate the decision to customers, de Lima made sure staff at all six stores went over the information during their daily huddles.

“For a week that was a focus, and we made sure to get all the right talking points out there so they could communicate that to customers,” she said.

Supermarkets across the country felt the impact of this summer's Gulf oil spill, but none arguably felt it more than Rouses, the Thibodeaux, La.-based chain that stakes much of its identity on local seafood. After the incident, supplies dwindled, and some consumers — despite their fondness for crawfish, crab, oysters and shrimp — shied away.

Seafood director James Breuhl and the rest of the team kept sales afloat thanks to solid planning and marketing. Frozen and pasteurized reserves of crawfish, shrimp and crab kept cases stocked, and imported frozen fish from Seattle proved to be effective substitutes for missing items. To reassure customers, Rouses put up signs around stores stating that their seafood was 100% safe. Breuhl, meanwhile, did various radio, television and print interviews to get the word out.

Now, with the government officially declaring Gulf seafood safe to eat, supplies — and customers — are starting to return. Earlier this month, Breuhl began getting shipments once more of prized Louisiana oysters.

“That's great for us, because for Thanksgiving just about every family in Louisiana makes their own oyster dressing,” said Breuhl.

Ask any shopper if they want to help preserve aquaculture, and they'll most likely say yes. These good intentions don't always translate into sustainable seafood purchases, however, as a recent study from the Perishables Group, in concert with Seafood Business magazine, shows. Below are the percentage of customers who:

In their quest for guilt-free seafood, consumers may have stumbled upon the holy grail of sustainable fish. Barramundi, a bass-like species native to Southeast Asia, has the distinction of being able to pack on pounds while subsisting off a vegetarian diet. Indeed, whereas fish like salmon require up to 4 pounds of smaller fish to gain 1 pound of weight, barramundi has an uncanny ability to synthesize the omega-3s found in plants, making it a lean-yet-efficient choice. Companies like Turner Falls, Mass.-based Australis have started offering barramundi as frozen bagged filets, and retailers like Whole Foods and Costco now carry them. Further fueling growth are some high-profile endorsements, including one from Dr. Oz, who highlighted it as a “Superfood to Eat Now.”

* Consider offering a private-label frozen fish program, which offers the value man consumers are looking for in seafood right now.

* Use signage to highlight seafood options and tell why they're sustainable.

* Educate shoppers on the health attributes of seafood, including the benefits of lean protein and omega-3s