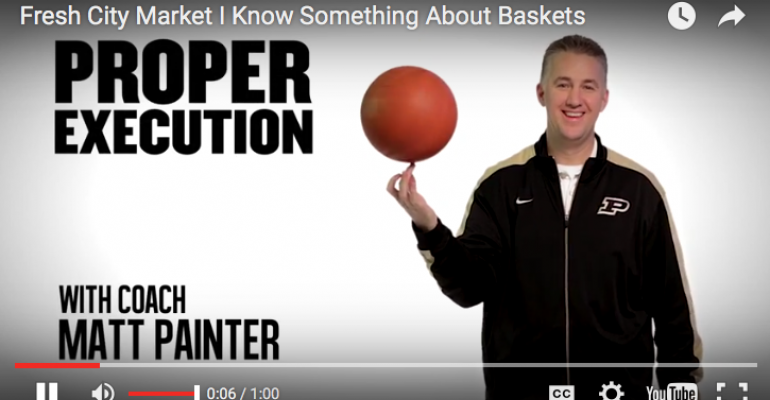 Fresh City Market's sister store, Fresh Madison Market at the campus on the University of Wisconsin, won two awards in the same competition, including Gold recognition for for Best Consumer Website, and Best Writing.

Both stores, specializing in fresh groceries, are owned by a joint venture of supplier SpartanNash, and partners Jeff Maurer, CEO, and Tim Steigauf.

The awards, formerly known as the ADDY Awards, are the advertising industry’s largest and most representative competition, attracting over 40,000 entries every year in local competitions, the retailer said.

The campaign starring Painter, known as "Proper Execution" promotes the store through humor, while at the same time providing basketball instruction. The webisode series also won the Judges Choice Award.

“We worked diligently with our agency partner to create a dynamic website that connected with our Millennial audiences, and we certainly added an engaging element by writing to college student shoppers," Maurer sid in a statement. "The Matt Painter websisodes have been viewed more than 60,000 times and they are truly a great success. We thank the American Advertising Federation for taking notice of our great work.”

TMA+Peritus, the Madison-based agency for both stores, designed, developed and wrote the site.