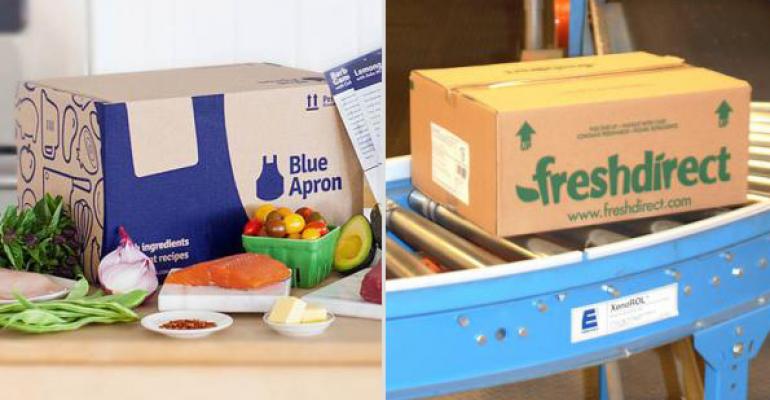 Food delivery companies FreshDirect and Blue Apron use their buying power and tech savvy to cater to consumer tastes, as well as drive new trends, the CEOs of the two companies said at the New York Times Food for Tomorrow conference last week.

As one example of FreshDirect’s impact on the food industry, Ackerman said customers had been asking for grass-fed lamb but farmers were hesitant to make the switch because it’s expensive to do so and there’s no guarantee they’ll be able to sell the higher-priced meat.

“So we’re matching up a lot of these consumer trends and we’re going to the farmer and saying, look we want to commit to your whole field. Grow this. We’ll already commit to a price to buy the whole lamb. And then we can bring a product like the grass-fed lamb to market, where the farmers, they actually weren’t willing to grow it unless we committed,” said Ackerman.

Unlike a grocery store, Blue Apron is heavily curated, only purchasing the products it needs for the recipes it creates, Salzberg said. “And that is interesting because it gives us a different moral responsibility as a company to select in some ways what our customers are getting, rather than being a grocery store and having our customers come into our store, look at thousands of items, and then vote for specifically what exactly values they care about in everything we do.”

Salzberg said Blue Apron strives to drive tastes for certain products, rather than just react to what consumers want. For example, the company has worked with suppliers to grow honey nut squash, with the goal to make it more widely available.

“We’re a product company in a lot of ways. We’re curating culinary experiences,” he said.

FoodKick was built for fill-in trips, Ackerman said, noting that research has found more than half of consumers are buying food for consumption less than 24 hours after purchase.

“We also find the products that people are buying for that one-hour consumption is different than necessarily the planned trip, which also gives us an opportunity to curate every day part, because you’re buying different things on Friday night than you’re buying ... on Saturday morning.”

As previously reported in SN, FreshDirect will use part of its recent $189 million investment to expand FoodKick, which is currently available in Brooklyn and in select areas of Queens.

The Food for Tomorrow conference took place at the Stone Barns Center for Food & Agriculture in Pocantico Hills, N.Y. Watch the full video of the panel below: