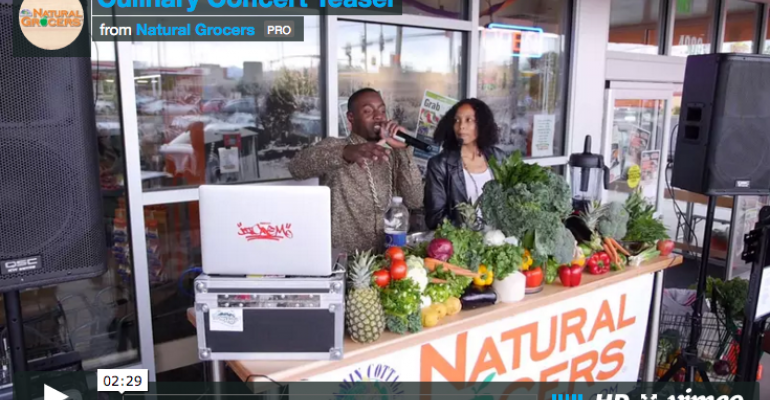 The Lakewood, Colo.-based retailer said it would release the first song produced in partnership with the artists May 28 in an effort to encourage Millennial shoppers to embrace nutrition education. DJ Cavem, who calls himself the "founder of the eco hip hop movement" has been performing a tour of educational performances at high schools, universities and Natural Grocers stores. The shows combine music and a cooking demonstration by Earth.

"Nutrition education is one of our founding principles, so when we learned about DJ Cavem and their commitment to educating our youth, we knew they would be an excellent advocate to help us educate and empower the millennial generation," Heather Isely, EVP of Natural Grocers, said in a release.

The song releasing May 28 will be accompanied by appearances at three Natural Grocers stores in the Austin, Texas market. It is part of the promotion for what natural Grocers is calling the "good4u Revolution," carrying a message of nutrition education and affordable natural and organic foods aimed at young people, the retailer said. The duo will also be performing at the Paleo(fx) trade show in Austin that evening.

The New Consumer: Millennials are just like you and me, only younger
Mar 28, 2016