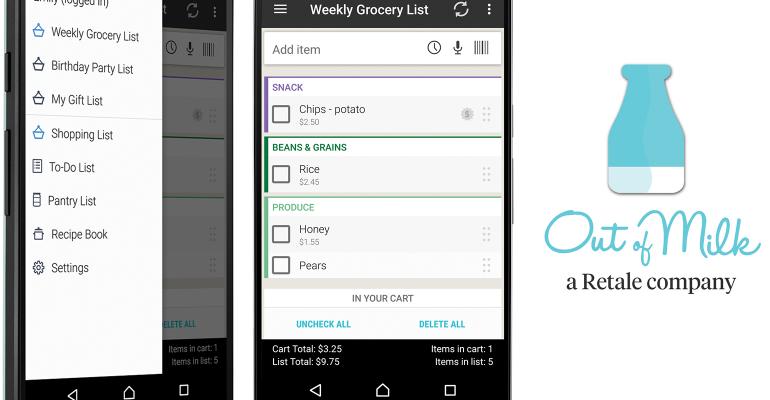 Out of Milk
Issues & Trends>Consumer Trends This post is part of the 10 Items of Less blog.

Ever since the first caveman pulled out a sharpened stick and carved a hieroglyphic buffalo onto a slab of limestone, hungry people have struggled to improve the shopping list as a means of survival.

I can attest to this personally, as peaceful maintenance of a joint grocery list with my wife in recent years has climbed to the top of our divorce-prevention strategies. That’s because we’ve become a cliché of the harried American grocery shoppers, busy working parents easily overwhelmed by routine home management tasks and little time to plan a shopping trip much less make one.

We’re aware technology is racing to find us solutions, and we’ve been circling the possibilities. Most recently we’ve agreed to dump what appeared at first to be a ideal solution — a shared Google doc — but found in practice that locating the app, making sure we’re signed in, finding the actual list, typing in what’s necessary and then deleting as we buy even less convenient than the magnetic pad of paper it replaced. Where’s a pencil when you need one?

Those Amazon buttons and voice-enabled assistants look fun but we’re unwilling to decorate our home with them and are still resisting giving into a single-retailer solution for almost anything we buy. Why should we when we shop a million different places? And while we maintain dedicated mobile apps for some of the stores we shop, we don’t use them to plan a trip, so they tend to sit unused until we’re in the store itself, and sometimes even then we forget.

As it turns out, that’s typical too, according to the owners of our newest contender, the popular shopping-list mobile phone app known as Out Of Milk. We’d downloaded and begun experimenting with Out Of Milk only weeks before it was acquired this month by Retale, the Chicago-based technology company whose eponymous app provides shoppers with location-based offers from retailers. From Retale’s point of view, the opportunity to aggregate offers from retailers through an app shoppers use regularly, regardless of where they prefer to shop, is a valuable property in a crowded neighborhood.

“The average consumer has about 100 different apps on their phone, but they will use less than 10 of those on a weekly basis,” Nels Stromborg, EVP of Retale, told me in a recent interview. “And if you take out Faceboook, Instagram, some sort of map technology, instant messaging and Google, that literally leaves you to try to get yourself into the other three or four apps that will be used on a weekly or monthly basis.”

So for all the potential power that mobile phone apps possess, Stromborg maintains very few retail apps have the kind of audience they need to communicate with those planning a shopping trip.

“Target’s Cartwheel app is marvelous. Walgreen’s app is really good. Walmart’s Savings Catcher is amazing. There are certain use cases where retailers will be able to scale an audience that will grow and they can effectively message,” he said. “But the reality is, for a smaller or midsize retailer the likelihood that you’re going to get a large mass audience that will actually download and uses that app on a regular basis is incredibly rare.”

In Out Of Milk, Retale sees the potential of extending retailer interactions with shoppers from the moment of “discovery” in-store to a moment “further down the funnel” — when they plan a trip, Stromborg said.

Out Of Milk allows shoppers to add items to a list by scanning, typing or voice recognition, while keeping track of prices, quantities and coupons. Early reviews from our household laud its ability to automatically sync lists between us, and easily port items back and forth from a large “pantry list” to a specific shopping list we can use in the store. We’re still getting used to navigating: More than once, we’ve inadvertently moved an item from one store category to another when we meant to scroll, and can’t opine on the quality of local offers received since we haven’t surrendered our zip code yet. On the plus side, we’re still married.

Wal-Mart Stores is advertising during the Academy Awards broadcast this year for the first time and doing so with cinematic intentions: The retailer’s planned television ads during the Feb. 26 broadcast will consist of three one-minute films directed by prominent Hollywood directors Antoine Fuqua, Marc Forster and the team of Seth Rogen and Evan Goldberg. Each will tackle the subject of a single Walmart receipt.

The effort has already drawn the rebuke of United Food and Commercial Workers-backed Making Change at Walmart, which ran an ad in the industry trade Variety this week urging celebrities to “speak out” against Walmart.

According to Tony Rogers, Walmart’s chief marketing officer, such high-profile efforts are likely to continue.

“As the world's largest brand, and a company that sells just about everything, we plan to be more involved, more ingrained in the cultural moments that our customers care about, starting with the Oscars,” he told the Hollywood Reporter.

More high-visibility marketing collisions could be on their way earlier Sunday when NASCAR kicks off its season with the annual Daytona 500. There you might see driver A.J. Allmendinger’s car carry the logo of Kroger’s ClickList Internet shopping brand on its fenders and hood for the first time. “We’re spreading the word on making life easier for our fans,” the driver said. “Sometimes there’s not enough time in the day and ClickList is an easy way to order your groceries online and pick up when ready. I’m always on the run and it’s perfect for someone like me and, of course, moms and dads too.”

Life after lockdown: 5 tips for retailers on planning ahead
Jun 15, 2021