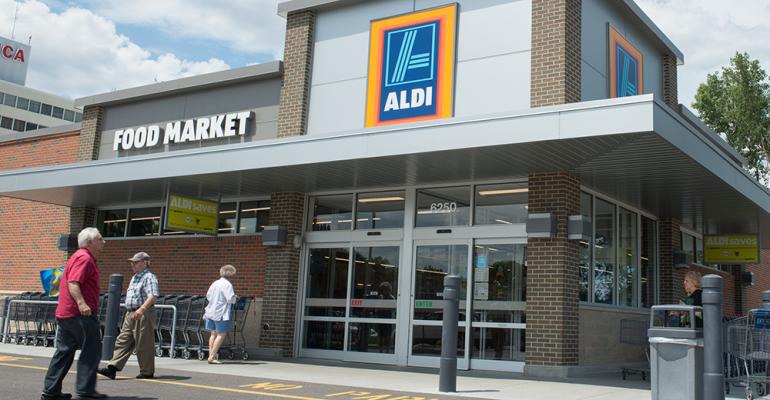 Aldi’s stores in California are averaging higher volumes than many of its locations around the country as consumers are attracted to its expanded perishables offering, convenience and low prices, according to a recent report.

The study was first reported yesterday in the Orange County Register, which noted that grocery prices have fallen about 3% in the Southern California region since Aldi entered the market about 18 months ago.

“They started a price war on milk and eggs,” said Flickinger.

He noted that WinCo Foods, the Boise, Idaho-based large-format discounter, actually beat Aldi by a couple of percentage points in his pricing survey, which was conducted over the summer.

Aldi, Walmart, Food 4 Less and Costco are all among the next tier of operators when it comes to pricing, along with Stater Bros. and Smart & Final, Flickinger said.

Target, which was virtually tied with Walmart as a low-price leader in California when Flickinger conducted a pricing study three years ago, is no longer among the lowest price operators in that region, he said.

Flickinger said consumers appear to have welcomed Aldi to the California market because it has long been one of the most highly priced regions of the country, not only for groceries but for other essentials as well.

“Aldi’s stores will do more volume because the low prices are more important in California to consumers, who are getting crushed from high prices across the board, from utilities to transportation to health care,” he said.

In addition, Aldi stores in California were among the first to feature the chain’s revamped format offering expanded perishables and new lighting and merchandising fixtures. The new look is being rolled out across most of its store base across the country.

The California stores also carry more tortillas, wine and gluten-free products, compared with the rest of the country, according to the OC Register article.

“California is leading the way in many innovative things,” Tom Cindel, group director of operations and logistics for Aldi Moreno Valley, told the newspaper.

Since March of last year, Aldi has opened 40 locations across Southern California, and plans to open 14 more by year-end and 20 to 25 next year, the OC Register reported.

Aldi also came in at a time of upheaval in the market, amidst the merger of Safeway and Albertsons and the bankruptcy of Haggen.

The higher sales volumes Aldi generates in California are more than triple the annual sales per store that the chain generated at the turn of the century, according to Flickinger.

Aldi’s growth in California comes as the chain, which is based in Germany but has a U.S. headquarters in Batavia, Ill., looks to add about 800 new locations across the U.S. in the next five years, increasing its store count to 2,500.

The chain’s European rival, Lidl, entered the U.S. market with stores in Virginia, North Carolina and South Carolina this summer, but reportedly has plans to open locations from Texas to New Jersey.

Flickinger said he expects Lidl to join Aldi in California by 2020.