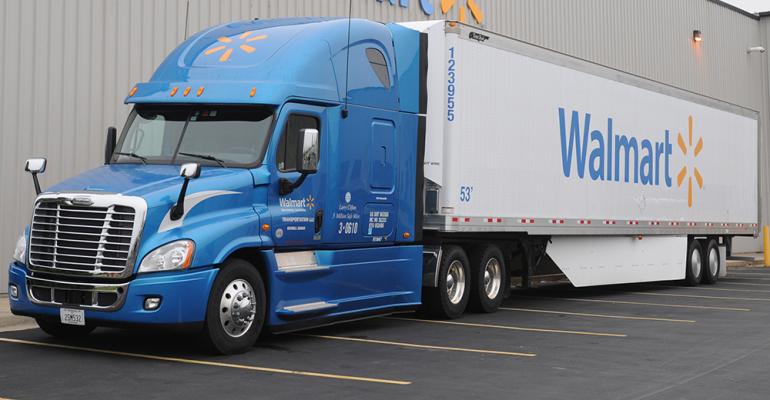 Driver shortage has less impact on retailer than others: CFO

Operating its own fleet of trucks has helped shield Walmart to some degree from the rising transportation costs that are impacting many industries, according to Brett M. Biggs, executive VP and chief financial officer.

Speaking at the Raymond James Institutional Investors Conference on Tuesday, Biggs said that although the company does use some third-party trucking, it benefits from having a captive supply chain, including transportation.

“It’s a good time to have your own fleet for a lot of reasons,” said Biggs. “To have the drivers that we have and the long tenured associates in that area is so important.”

According to some recent reports, trucking capacity in the U.S. is maxed out and the industry faces a large driver shortage — about 50,000 open positions, according to the American Trucking Association — that is driving up costs for many companies that rely on trucks to transport goods, including retailers and CPG companies.

Although Walmart noted that its transportation costs rose slightly in the recently ended fourth quarter, compared with a year ago, Biggs said that was due in part to an increase in fuel costs of about 10% to 12%.

“The price pressure that you're reading about and seeing would have less of an impact on us than it would, I think, some others,” he said.

Also, asked what was driving the improved sales performance at Walmart in recent years, Biggs cited, among other things, the improvements in the quality of perishables.

He also cited investments in technology, such as self-checkout, which he said is being expanded in remodeled stores. It has been embraced by customers, and is making stores more efficient at the same time, he said.

Walmart has also been making its its Scan & Go mobile app-based checkout system available in more locations. Last month the company rolled out the service to 100 stores in 33 states in the second phase of a rollout that began with a small scale test, according to reports.