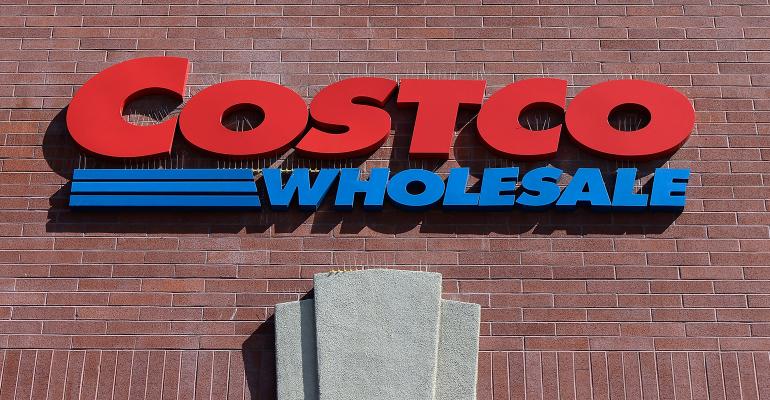 The kiosks were installed in the Tustin and Pacoima stores around the first of the month and have so far been a “great success and wait times have been cut substantially,” according to a Costco employee who was interviewed by the Orange County Register.

A spokesperson at Costco’s Issaquah, Wash., headquarters confirmed to Supermarket News, “the kiosks are in the early stages of testing,” but declined further comment.

To make room for the units, Costco cut its “yellow line section” in half, and moved the coffee grinder and bagged ice freezer to other areas of the store.

Shoppers then pay with a credit or debit card (cash is not accepted), take the printed receipt and go to the kiosk pickup window to get their order.

The newspaper found during a visit on a “very hectic” Sunday afternoon that the kiosks had dramatically reduced the number of customers waiting along the yellow line, and that the wait at the kiosk pickup window was very short.

“This should eliminate those obnoxious people [who] after waiting in line staring at their phones suddenly look up clueless at the menu that’s been in their face for minutes and they can’t decide what of the 12 or so items they want,” one reader wrote on the paper’s website.

Another said he used the system shortly after it was installed and found it “a great addition! The often long food line is a turn-off and many of us just leave rather than wait. This new system should help reduce lines substantially.”

“These kiosks have really grown in popularity in convenience stores, like Wawa, Quick Chek and Sheetz,” said Bill Bishop, chief architect at Brick Meets Click, a consulting firm based in Barrington, Ill. “They’ve kind of revolutionized the ordering process.”

“It is faster to make the order and depending on the design of the kiosk it is a very nice up-sell opportunity and can expand the spend,” he said. “It also streamlines the payment option and eliminates that fumbling for cash or a credit card at the register.”

While most shoppers embrace the new technology, Bishop believes it may put off some people, including senior citizens.

“Costco’s limited-assortment foodservice menu is very aggressively priced, and in the Costco near me, we have many retired folks who just go there for lunch and not to shop,” Bishop said. “But for the vast majority of people, this is the new way to do it.”