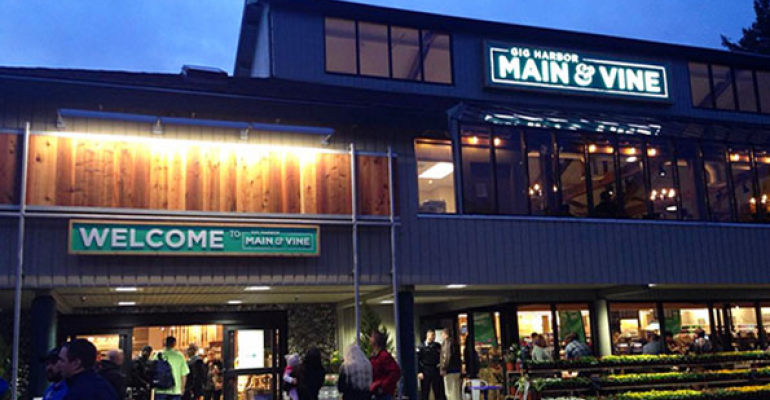 Kroger to close Main & Vine store after only 23 months

Learnings from venture being applied to affiliate banners

The Kroger Co. will be closing its sole Main & Vine location in January after testing techniques for use at affiliate stores.

Located in Gig Harbor, Wash., the lone Main & Vine store opened in February of 2016. Despite its brief tenure, Kroger’s Head of Corporate Communications and Media Relations Kristal Howard said that the “unique venture” was not a fruitless endeavor.

“From the Main & Vine experience, we have learned many things about some of the best ways to provide quality, fresh and new foods to our customers,” Howard said in an emailed statement. “Our family of companies has already started to incorporate some of these features and unique offerings in other stores across the country, including the new Fred Meyer store opening next month in Gig Harbor.”

Howard said that Main & Vine’s heat-and-serve bulk seafood initiative and a pizza program that had been unique to the store are among the features that will receive new life at other Kroger locations.

However, she declined to comment on whether Main & Vine was always intended to be an experimental store with a short run or if the upcoming closure came about unexpectedly.

During its brief stint, the 27,000-square-foot store has focused on healthy, affordable eating and highlighting local producers. It featured a large selection of produce as well as 300 bulk items at its launch.

“From the beginning the focus of Main & Vine has always been centered on the community and fresh, local and sustainable foods, as well as mainstream grocery items available at affordable prices,” Dann Kohl, Main & Vine’s store manager, said in a statement in early 2016. “Residents now have a space to explore local brands and purveyors, get inspired for their next meal, learn something new at the Event Center or meet up with friends and family in our café area.”

The Event Center, which was positioned in the middle of the store rather than the perimeter, presented cooking demos as well as food and beverage tastings.

Main & Vine will permanently shut its doors on or around Jan. 9. Kroger said it is is making an effort to secure positions for its entire staff at other stores within its network.

The closure comes after the Cincinnati-based retailer beat analyst projections and notched a 1.1% rise in identical-store sales, excluding fuel, for the third quarter ending Nov. 4.

Despite the strong showing, Kroger has made it known that it is open to shaking up its roster of banners. In October, the company announced that its convenience store division was available for sale. The c-store segment of Kroger’s operations constitutes several banners that total 784 stores spread across 18 states.

Kroger’s current grocery network consists of about 2,800 retail food stores under a variety of banners in 35 states and Washington D.C.