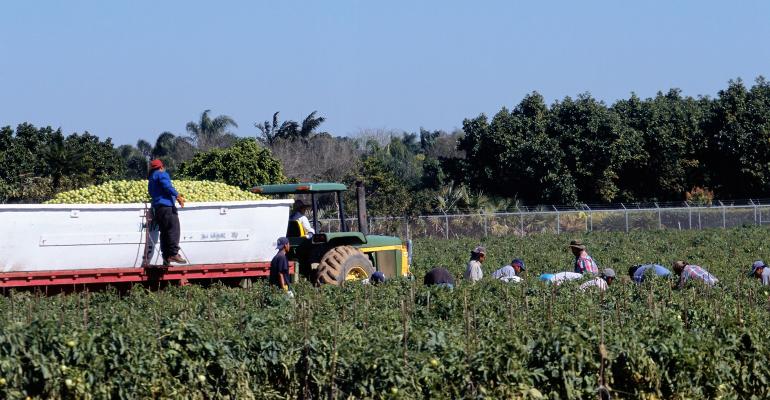 Lack of skilled immigrant labor could cause higher food prices

A 2014 study commissioned by the American Farm Bureau Federation put the percentage of undocumented farm laborers at between 50 percent and 70 percent of the total workforce.

President Donald Trump has vowed to crack down on illegal immigration. Shortly after his election in November, he told CBS’s “60 Minutes” that he planned to deport millions of undocumented immigrants immediately.

“What we are going to do is get the people that are criminal and have criminal records, gang members, drug dealers, where a lot of these people, probably 2 million, it could be even 3 million, we are getting them out of our country or we are going to incarcerate,” Trump said. He then said that once that initial group was eliminated and “the border is secure,” immigration officers would make a “determination” about the remaining undocumented workers.

The current admiration’s rhetoric on illegal immigration and reports on crackdowns on undocumented workers have brought jitters not only to immigrant workers, but also to their employers.

It’s unclear exactly what a crackdown on labor would do to produce pricing, particularly considering other trade-related and taxation issues that are up in the air. Those potential initiatives include mentions by the Trump administration of a tax of up to 20 percent on imports from Mexico to pay for the proposed border wall, and a new corporate tax structure proposed by Congress that would give tax breaks to exporters and remove tax exemptions from importers. The border adjustment tax would basically change how goods are taxed, taxing them where they’re consumed rather than where they’re produced.

Several companies have come out in support of a border adjustment tax of some kind, according to the American Made Coalition. The group lists MillerCoors and Blue, Diamond Growers among the list of supporters.

“While our global competitors continue to improve their tax codes by cutting rates and encouraging investment and job creation, our tax code remains frozen in place. The result is lost investment, fewer jobs and lower wages,” the American Made Coalition states in its press materials. Although the idea behind the tax is to encourage domestic production, the National Retail Federation opposes it, saying in a statement on Feb. 28 that the costs on “everyday necessities like food, gas, clothing and prescription medicine” for the average American household would go up by $1,700 in the first year.

“We’re still studying that tax reform, and we’re hoping some common sense comes to that area. We want to make sure it doesn’t roll over into a trade situation and cause a trade war that would not be good for anyone in agriculture,” Duvall told agriculture publication AgFax. DeWayne Dove, vice president of purchasing for purchasing cooperative SpenDifference, said items besides avocadoes (the U.S. imports 75% of the fruit from Mexico, according to the USDA) that would be affected by a tax on imports from Mexico would include Brussels sprouts, strawberries, tomatoes, “wet vegetables” such as broccoli and cilantro, peppers and squash.

“The earliest experts say [such a tax] could occur, based on the need to work itself through the legislature and then be executed, is the end of 2017,” Dove said.

With the more than $115 billion in agricultural imports, according to the U.S. Department of Agriculture, possibly being squeezed (of which $9.5 billion are fresh fruit and vegetables from Mexico), laborers in the United States become even more important, and past crackdowns on undocumented workers have not gone well.

After Georgia passed HB 87 in 2011, economists and marketing professors at the University of Georgia surveyed farmers and calculated that the state’s farming sector lost $140 million due to labor shortages that meant crops weren’t harvested. Add to that other segments affected, such as distributors and retailers, and the figure was estimated to be as high as $400 million. “The White House may want to look at what happened in Georgia and other Southern agricultural states. … [A] significant portion of their crops went un-harvested and literally died in the fields, greatly impacting both price and availability of products,” Kefauver said.

“Those jobs were not back-filled by non-immigrants as anticipated by state lawmakers, and, in fact, were not filled at all.”

Those jobs couldn’t have been back-filled, according to Kathy Means, vice president of industry relations at the Produce Marketing Association, noting that farm workers are skilled laborers performing jobs that native-born Americans don’t want.

In a speech on Feb. 28, Trump advocated implementing a merit-based immigration system focused on skilled workers. Experts say farm workers would fit into that category. “It does take a special person to get out and work in the fields in the hot sun, stooping, lifting. It’s just hard work,” said Charles Hall, executive director of the Georgia Fruit and Vegetable Growers Association. He added that you have to know what you’re doing to harvest properly.

“You have to know when that peach or tomato or pepper is ripe. Someone who is not skilled with that sense of touch, they’re going to be picking product that’s not ripe, and consumers will not appreciate it.”

Since farm workers are paid by the amount that they pick, he said, it’s not uncommon for skilled workers to earn $15 to $18 per hour. Unskilled workers would earn less, he said, making the job undesirable to locals.

Produce isn’t the only food likely to be affected by a labor shortage.

The National Milk Producers Federation said half of the workers on U.S. dairy farms are immigrants, and, according to a report released in September 2015, losing them would increase retail milk prices by 90 percent and cost the U.S. economy $32.1 billion in economic output. However, it should be noted the survey does not distinguish between undocumented and documented immigrant workers.

Means of the Produce Marketing Association said her industry is used to adjusting to changes in everything from weather to labor to economic policy.

“We deal with everything from freezes to hurricanes to port strikes. … It’s not that [the current situation] is situation-normal, it’s that the produce industry is highly adaptable,” she said.

But it’s a global industry, and disruptions in long-established networks might not just devastate individual farmers and packing lines, but pricing as well.

“We’ve got both sides of that, benefiting from importing feeder cattle, which helps us keep up our processing capacity, and then we export the [finished] beef back,” Anderson said.

None of these factors takes into consideration the possibility of retaliatory tariffs by other countries, he said.

“I think in the food context, that’s really important,” he said.