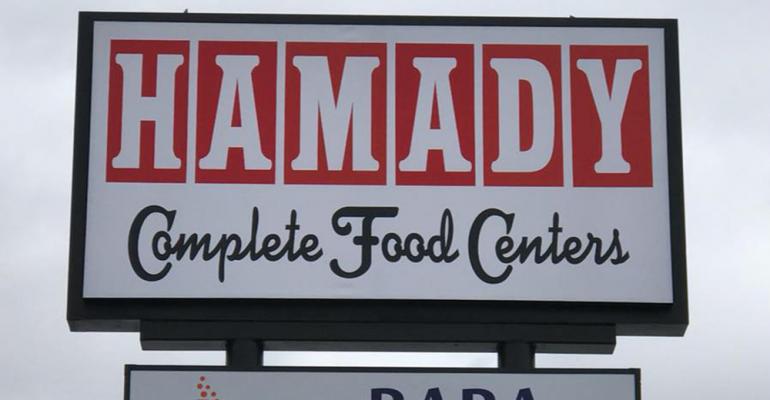 A store is reborn

Hamady banner to reappear in Flint, Mich., after a 27-year absence

Hamady Brothers, once a leading supermarket chain in central Michigan that ceased operations in 1991, is making a comeback. It is now going to be known as Hamady Complete Food Centers, with its first store slated to open in early March.

Housed in a former Kroger in the Hallwood Plaza shopping center on Pierson Road, the 74,000-square-foot store will boast a deli, bakery, florist, pharmacy, dollar store section, local beers, a department of Michigan-made products, a soul food buffet and other amenities. Hamady is being reincarnated by Jim McColgan, Jr., son of the defunct chain’s last president.

“I think it’s really thrilling and exciting to have Hamady back because Hamady was the hometown boy,” McColgan, president of the Hamady organization, told ABC 12 News in Flint. “It’s time to bring the hometown boy home.”

Hamady Complete Food Centers is expected to employ about 60 full-time workers. A job fair held in mid-January at the local Sloan Museum attracted more than 400 applicants. The store was initially expected to open last summer, but reconstruction on the building was held up due to logistical issues.

The Pierson Road store is expected to be the flagship of what will become a fledgling chain. Company officials are also looking at opening stores in Durand, Grand Blanc and Clio, Mich.

Even though it is not yet open, Hamady Complete Food Center has been drawing five-star rave reviews on its Facebook page.

“Go Hamady! Welcome back!!! My dad worked there as a teenager and into adulthood,” wrote Sarah Lanier. “I think it is wonderful that Hamady is coming to an area without nearby grocery stores. It will be easier for the elderly, disabled or even people with no cars in the area to be able to shop near home.”

Hamady Brothers was founded in 1911, by Lebanese immigrant cousins Michael and Kamol Hamady, who referred to themselves as brothers. At its peak, Hamady Brothers operated 37 stores in the Flint area. The company became known by sending truckloads of food to strikers at the famous 1937 sit-down strike at General Motors’ Fisher Body plant that gave rise to the United Auto Workers union.

The chain grew through purchasing 21 closed Kroger stores, along with smaller independents Hutch’s, Vescio’s and Chatham. Hamady Brothers eventually went bankrupt, and in 1989 was sold to McColgan Investment. The chain closed the last of its stores in 1991, with 13 locations being sold to Kessel Food Markets.

Hamady was so well ingrained in the Flint community that paper bags in town were known as “Hamady sacks” — one of them is even on display at the Sloan Museum.