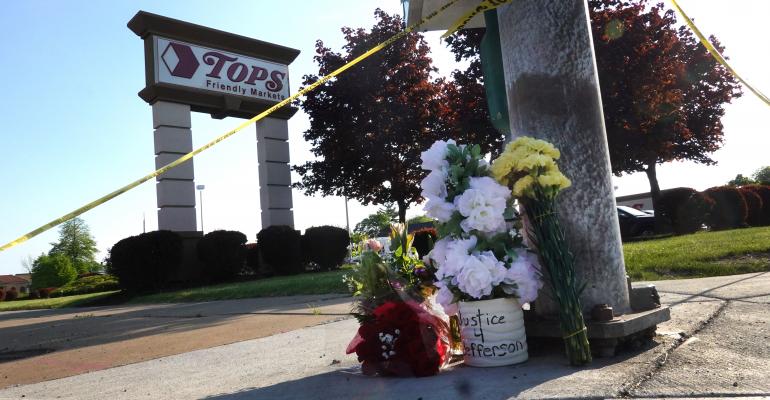 Investigations are continuing after a gunman in tactical gear entered a Tops Friendly Market in Buffalo, N.Y., on Saturday afternoon and shot shoppers and employees, killing 10 and wounding three.

Four of the victims were store employees, including a security guard who confronted the shooter and was killed, The Buffalo News reported. The Buffalo Police Department has identified the alleged shooter as 18-year-old Payton Gendron and taken him into custody. He was arraigned on first-degree murder charges on Saturday.

Related: One killed, two wounded in shooting at Stop & Shop on Long Island

Local, state and federal authorities described the shooting as racially motivated. The Tops store, at 1275 Jefferson Ave., a few miles north of downtown Buffalo, is located in a predominantly Black neighborhood, and 11 of the 13 victims were Black, police said. Authorities are investigating potential links between the gunman, who is white, and white supremacist material posted on social media, including a 180-page “manifesto” that described the plot and named Gendron as the gunman.

“We are shocked and deeply saddened by this senseless act of violence and our thoughts and prayers are with the victims and their families,” Williamsville, N.Y.-based Tops said in a statement after the shooting on Saturday. “Our top priority remains the health and well-being of our associates and customers. We appreciate the quick response of local law enforcement and are providing all available resources to assist authorities in the ongoing investigation.” 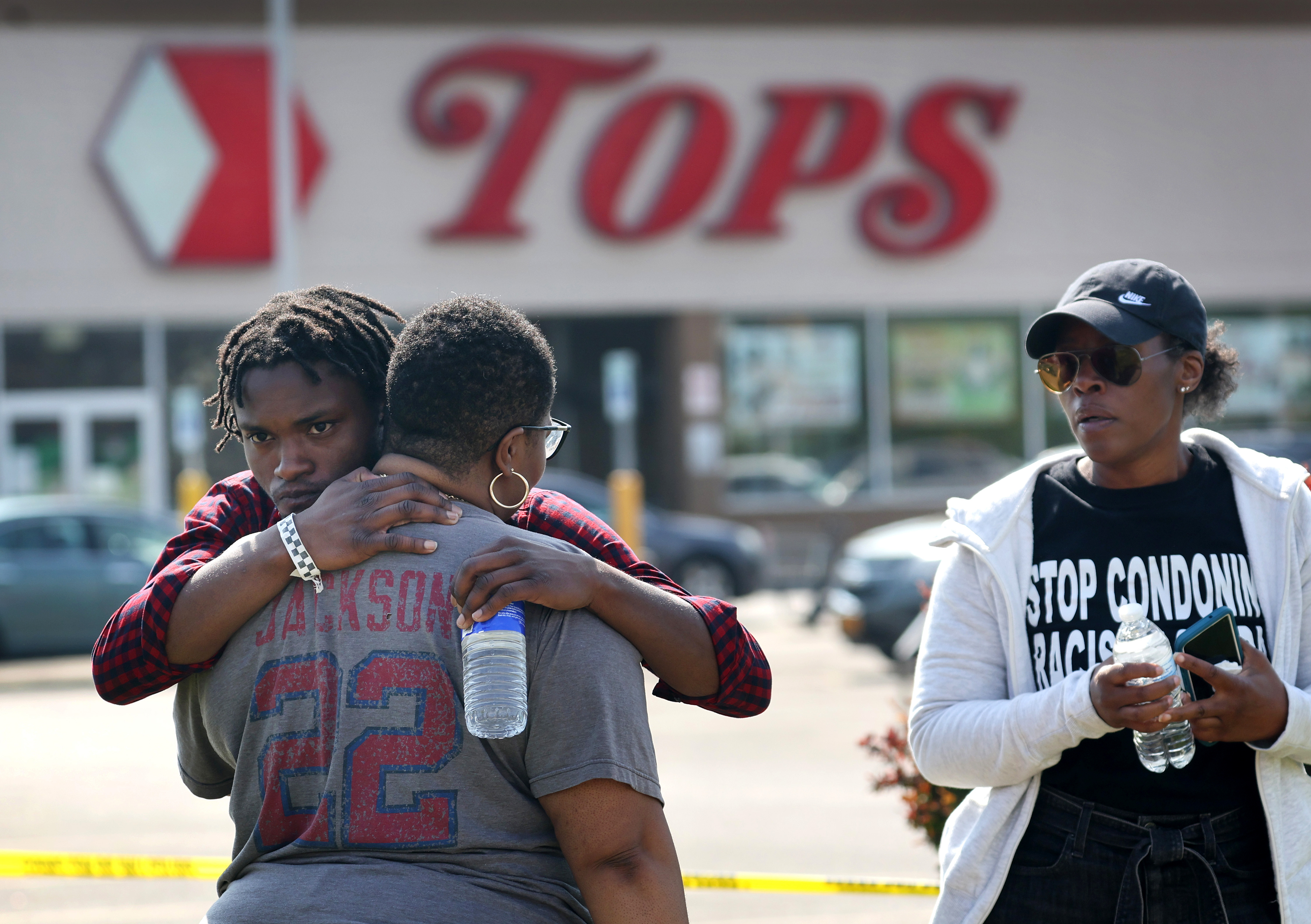 People gathered outside of a Tops Friendly Market in Buffalo, N.Y., after a gunman opened fire at the store, killing ten people and wounding another three, and was apprehended by police.

According to authorities, the suspect — who lives about 200 miles away in Conklin, N.Y. — drove to the Tops store on May 14 and around 2:30 p.m. opened fire in the parking lot, killing three people and wounding a fourth. Armed with an assault-style rifle, he then entered the store and shot customers and workers before surrendering near the lobby, where he was met by law enforcement. Police said he livestreamed the shooting from a camera atop a helmet he wore as part of his armored gear.

Store associates wounded in the shooting were Christopher Braden, 55, of Lackawanna, N.Y.; Zaire Goodman, 20, of Buffalo; and Jennifer Warrington, 50, of Tonawanda, N.Y., Tops reported on Monday. The security guard killed in the shooting — Aaron Salter, 55, of Lockport, N.Y. — was a retired Buffalo Police officer that hired by Tops through an outside agency, Allied Security Co., the supermarket chain said.

The Jefferson Avenue store, serving families on Buffalo’s East Side, remains closed until further notice, Tops said on Monday. To help customers meet their grocery and pharmacy needs, the retailer is providing free bus shuttle service from 10 a.m. to 7 p.m. daily from Jefferson Avenue and Riley Street to the nearby Tops supermarket on Elmwood Avenue. Tops said it’s also working with Buffalo City Council Member Ulysees Wingo Sr., who represents the Masten District, to provide free food and supplies to area residents via the Resource Council of WNY at 347 East Ferry St. in Buffalo.

Tops added that grief counseling is available to all associates and their families starting today and Tuesday from noon to 6 p.m. at the Merriweather Library on 1324 Jefferson Avenue. Local organizations, including United Way of Buffalo & Erie County, also have offered counseling support.

“The Tops family is heartbroken over the senseless violence of this past weekend that has impacted our associates and customers of the Tops store on Jefferson Avenue — and our entire community. Tops has been committed to this community and to the city of Buffalo for decades, and this tragedy will not change that commitment. We thank our local, state and federal law enforcement agencies for their quick response and diligence, and we are providing all available resources to assist authorities in the ongoing investigation,” Tops Friendly Markets President John Persons said in a statement on Monday.

Overall, Tops has about 150 supermarkets in New York, Pennsylvania and Vermont, including five run by franchisees. Last fall, the chain merged with Price Chopper/Market 32 to form Northeast Grocery Inc.

“We also want to thank [Buffalo] Mayor Byron Brown and his staff for all their tremendous guidance and support. It has been heartwarming to see the outpouring of community support. Many of you have reached out with condolences and offers to help. Thank you. Most importantly, we are rapidly working to create a fund for the families of victims and those directly impacted and will be providing more information over the next few days. It is our sincere hope to partner with many local and business leaders on this endeavor,” Persons added. “My prayers are with Buffalonians during this time of sadness and grief and as this tragedy continues to unfold and we learn more about its extent.”

The incident at Tops comes just over a year after a pair of other supermarket shootings. In April 2021, a gunman killed one employee and wounded two others at a Stop & Shop store in West Hempstead, N.Y. And less than a month earlier, a lone shooter entered a King Soopers supermarket in Boulder, Colo. and killed 10 people, including a police officer, three store employees and an Instacart personal shopper.

“The UFCW is once again heartbroken and dismayed at this senseless gun violence that our members, grocery workers and shoppers have been forced to face. Our hearts are with our members, the families, loved ones, co-workers and community who are enduring the most unthinkable pain and loss this evening,” Marc Perrone, president of UFCW International, which represents associates at the Tops store, said in a statement Saturday evening. “That pain is only worsened by the horrific early reports that this shooting is being investigated as a racially motivated attack. Over and over again, workers across industries, including UFCW grocery workers, have been subjected to this type of senseless hate and workplace violence. It is long overdue for America’s elected leaders to take the steps necessary to protect our workers and communities from these continued acts of hate and violent tragedies.”