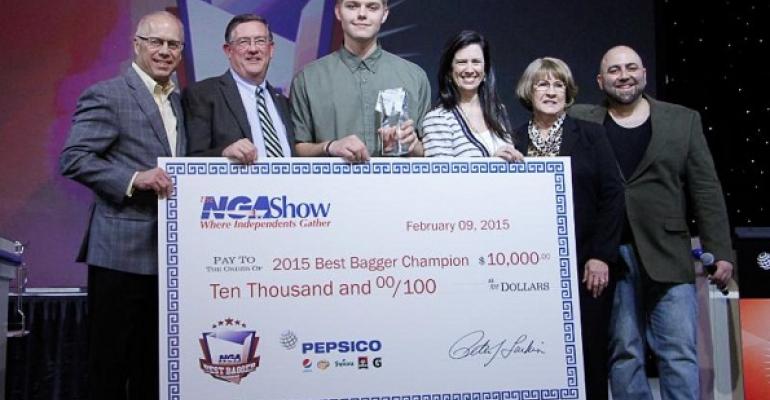 Defeating 24 other competitors from across North America, David Tochinskiy of Rosauers Supermarket in Spokane, Wash., claimed the title of the National Grocers Association Best Bagger Champion.

Sponsored by PepsiCo, the competition was emceed this year by Food Network star Duff Goldman and held at The NGA Show at the Mirage Hotel and Casino in Las Vegas. Contestants were judged by speed of bagging, proper bag-building technique, weight distribution in the bag, as well as style, attitude and appearance.

Tochinskiy was awarded a $10,000 grand prize and a "Golden Grocery Bag" trophy.

Lucas Mealer of Kroger in Jackson,Tenn., was awarded the second-place prize of $5,000, and the third-place prize of $1,000 went to Zach Anderson of Lunds in Bloomington, Minn. Fourth- and fifth-place winners, winning $1,000 each, were Mai Her of Skogen's Festival Foods in Sheboygan, Wis., and Francis Cavattone III of Big Y Foods in Springfield, Mass., respectively.

"This competition brings attention to a very important aspect of a consumer's shopping experience as it is the bagger who serves as the last touch to the shopper. The proper bagging of groceries is key to providing quality customer service," said NGA President and CEO Peter Larkin. "A big congratulations to David Tochinskiy for showcasing your exceptional bagging techniques and ultimately taking home the title of Best Bagger Champion."