While Hart’s received some financial assistance from the city of Rochester, Sparks said, “The bigger thing was just they’ve been so helpful — the city, the county, even the state has stepped in to help us through the process, get us through all the permitting and all the things that were required to get the building up and running, for sure.”

A touch of the past
Hart’s took its name from a now-defunct chain of small grocery stores that used to operate in the area. The original Hart’s was known for making deliveries in branded wagons. Rochester residents have donated a few of the old wagons, which the current Hart’s uses for creative store displays.
Meals to go
At the front of the store, Hart’s has a coffee bar and a small kitchen that sells breakfast and lunch sandwiches.
Scratch cooking
“We have a big full-sized kitchen that’s doing all the hot and cold prepared foods. Everything is done from scratch. A significant amount of it’s with locally sourced ingredients,” said Sparks.
Dairy delights
Hart’s highlights upstate New York’s bountiful dairy products such as milk, yogurt and cheese.
Meat matters
Local meats will be available year-round. Hart’s butchers whole animals in the store and grinds its own meats and sausages.
Top shelf
Hart’s also carries a sizeable selection of locally sourced center store items.
In season

The retailer plans to stock local produce year-round, but options will obviously vary greatly by season.

“And opening on August 15 we’re about peak season right now on corn and a lot of things. So we’ll do a ton of local product this time of year and then as we tail off through the holiday season obviously that’ll slow down and then we’ll have to supplement here,” said Sparks.

Rochester residents have already shown their enthusiasm for Hart’s. The retailer signed up 1,500 people for its loyalty card before the store even opened. 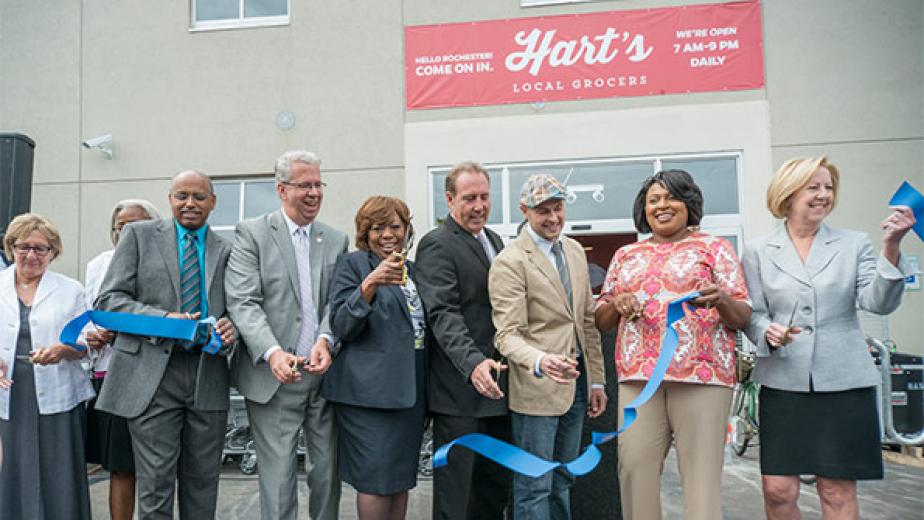