Whole Foods Market on Feb. 18 debuted its first store on Manhattan’s Upper East Side, just a block from a Fairway store that appeared to have been one of the chain’s busiest. The new Whole Foods, on East 87th Street and 3rd Avenue, occupies 39,000 square feet on two floors, plus a mezzanine area for in-store dining between the first floor (mostly prepared and grab-and-go foods) and second floor (dry groceries, meat and seafood, produce and the Whole Body shop).

Cheese, please
The new Whole Foods features the chain’s first cheese club. Members get a monthly selection of cheeses, artisanal bread or crackers, and condiments for $49.99 per month.
Sliced to order
Whole Foods is offering sliced-to-order salmon for the first time as a test in the new store.
Meaty meal plans
At the meat counter, the new Whole Foods features prominent signage about local sourcing and animal welfare, and also offers pre-assembled “crock pot meals” and dinner-for-two kits.
Fruity flavors
Whole Foods is offering several varieties of infused waters, made in-house for the first time at the chain. Flavors include blackberry-mint, rosemary-grapefruit, mango-lime and strawberry-lemon-basil.
Island free
The first floor features Whole Foods’ trademark hot and cold salad bars along the walls, instead of on islands.
Custom quaffs
The second floor features cold beer, as well as a wall of local and craft brews to create mix-and-match six-packs.
Hanging out
As in other urban locations, the tight confines of the new Whole Foods inspire creative merchandising, such as these banana racks.
Stacked deals
Whole Foods touts aggressive pricing on private-label products, such as its 365 line, on endcaps in several places throughout the store.
Price war
The Fairway on East 86th Street, a block away from the new Whole Foods, had a banner up for several days poking fun at Whole Foods’ reputation for being high-priced.
It’s that-a-way
The East 86th Street Fairway has been handing out coupons for $5 off an order of $50 in the weeks leading up to Whole Foods’ opening. This coupon distributor was directing a shopper who had just walked past Whole Foods to the Fairway.
‘Good as gold’
The Fairway nearest the new Whole Foods has been handing out plastic-disc coupons good for $5 off an order of $50. 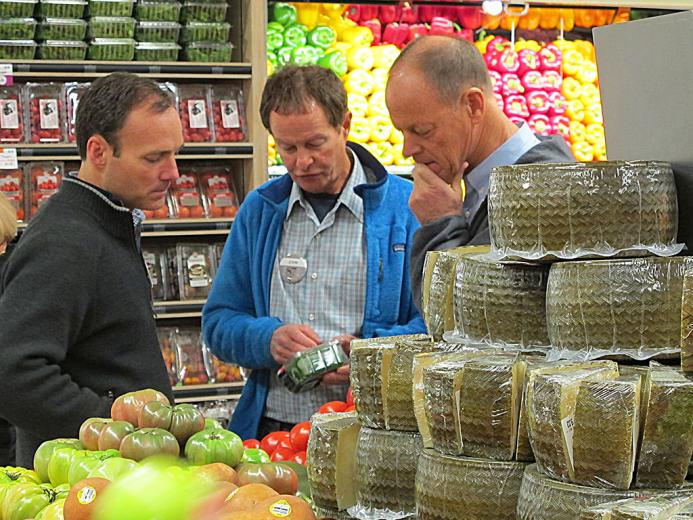