Retailers’ seafood departments are collaborating with other fresh and dry grocery departments to add convenience, and get the “meal” idea across with sauces, sides and even desserts at the seafood service case. They’re using other inter-department tactics, too, to lure shoppers to the fresh seafood counter. Building displays of seafood accompaniments early in the traffic pattern and positioning interesting, frozen seafood items in the grocery aisle are intended to pique shoppers’ interest in cooking fresh seafood.

Above: Bristol Farms lines the front of its service seafood cases with sauces made and packaged in its central kitchen, and delivered to stores each morning.

The larger of Bristol Farms’ stores feature fresh seafood cases that run 16 feet, offering as many as 35 species during a week, 25 on any given day. Some offer fresh-made, value-added items such as stuffed salmon.

At Newport Avenue Market in Bend, Ore., the fresh seafood department stocks and maintains a two-door freezer set in the midst of grocery for slow movers such as monchong and calamari tentacles. Barbecued eel is a good seller from this case.

Rouses Markets, Thibodaux, La., uses “boiling kits” displayed in produce or other upfront departments to catch shoppers’ attention quickly and make them think of boiling seafood, a popular activity in the region. Stacks of seafood boil spices and beer — associated with traditional seafood boils — make up a large part of the display.

In addition to its well-known daily meal sites that feature a recipe with all ingredients in one spot, Wegmans offers meal ideas within departments. Here, ingredients — fresh bok choy, Wegmans-brand mushroom dashi simmer sauce and fresh salmon — are brought together with a recipe in a case directly across from the fresh seafood case. 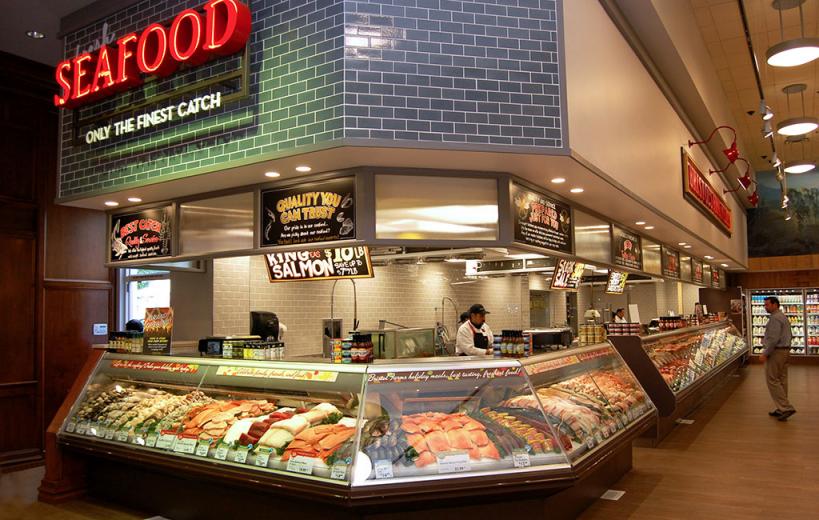